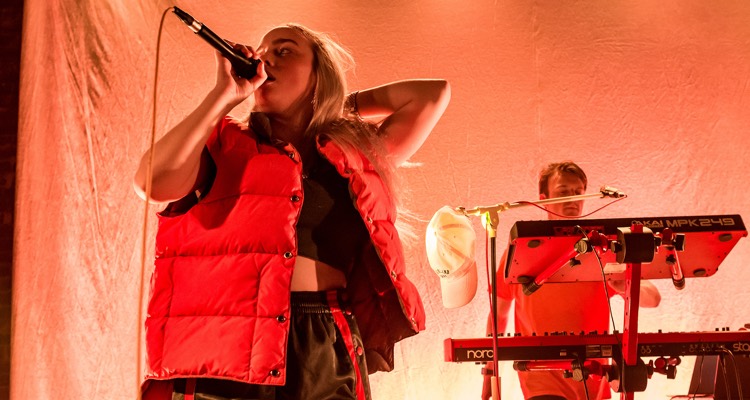 The most popular concert tickets, tour stops, and artists around the country, based on SeatGeek data through Wednesday, October 9th. 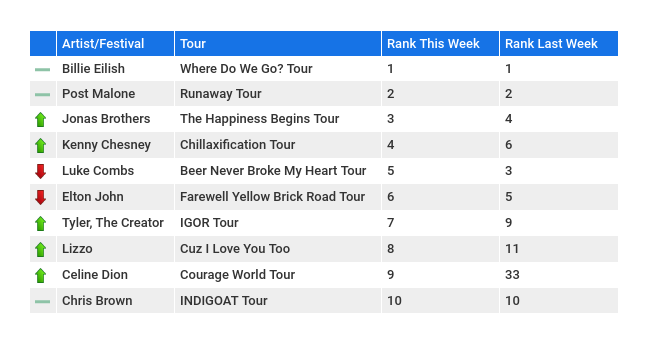 Billie Eilish is more popular than ever, in part due to a stellar performance at last week’s Austin City Limits music festival. Her “Where Do We Go? World Tour” is becoming an extremely sought-after ticket: the musician will kick things off on March 9 in Miami at the AmericanAirlines Arena followed by stops throughout the East Coast, including a show at Madison Square Garden in New York City on March 15.

Post Malone is still touring behind his new album, Hollywood’s Bleeding, and you can currently catch him on the “Runaway Tour.” This month, the rapper works his way down from Buffalo to Miami before turning back West to play New Orleans’ Voodoo Festival.

In addition to being knee-deep in “Happiness Begins” tour dates from now through the end of the year (plus a slew of shows overseas), the Jonas Brothers have also just been tapped for several performances on this year’s iHeart Radio’s Jingle Ball.

Country icon Kenny Chesney is heading out next year for another stadium run, dubbed the “Chillaxification Tour.” The fun takes place in the summer months of 2020, kicking off on April 18 in Arlington, TX and wrapping up on August 28 in Foxborough, MA.

Not only did Luke Combs just announce the “What You See is What You Get Tour” for 2020, but he’s still in the midst of his “Beer Never Broke My Heart” tour. You can catch him now through December, with performances in Canada this weekend. 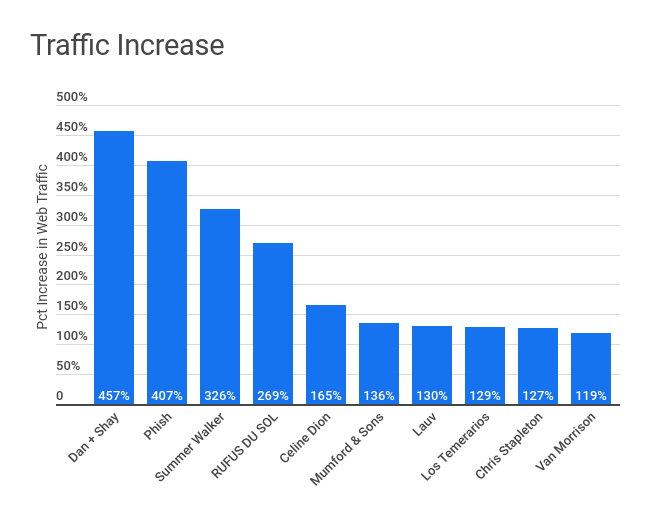 Recent Justin Bieber collaborators, Dan + Shay, have just announced dates for “The (Arena) Tour.” Set to kick off in the spring of 2020, the duo will perform throughout the US including Nashville, New York City, Chicago, San Francisco and everywhere in between.

In addition to their upcoming fall jaunt, the prolific jam band Phish has recently announced their annual four-night run at Madison Square Garden in New York City. Held over December 28 to the 31st, the tickets are in high demand. In the meantime, catch them in Providence, RI over Thanksgiving weekend.

This sultry singer has just released her debut studio album, Over It. You can catch her on the road from October 26 through December 22, including stops in Texas, California, the Midwest and East Coast.

Australia’s foremost EDM trio has been trekking across the U.S. of late, and even suffering a broken-down bus somewhere in Idaho.  The group’s tour included an appearance that Las Vegas’ “Life Is Beautiful” and a gracing of Los Angeles’ State Historic Park.

Celine Dion has just announced more dates behind her “Courage World Tour,” her first major tour since ending her long-running Vegas residency. Catch her when the fun begins next week with a two-night run in Ottawa, ON. 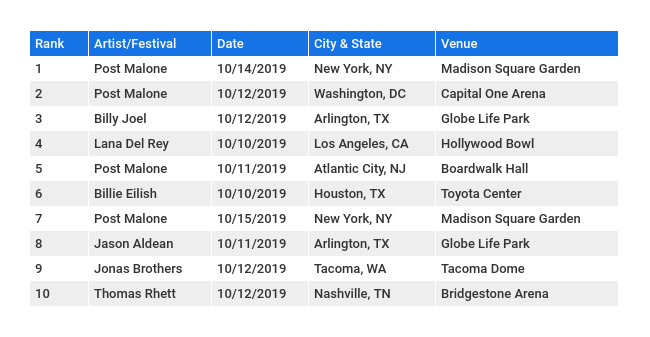 Move over Billy and Billie, you’re no match for Post Malone this week. The hip-hop/singer-songwriter (what genre is Posty, anyway?) is having a wildly successful turnout for his “Runaway Tour,” with fans eager to score tickets to his upcoming New York City, DC and Atlantic City shows. Meanwhile, Billy Joel will take his long-running tour to Arlington this weekend, while a few cities over Billie Eilish will take the stage at Houston’s Toyota Center.

Lana Del Rey, who just added some dates to her “Norman F–king Tour,” is also gaining traction this week for her performance at the Hollywood Bowl in Los Angeles. And lest we forget about the Jonas Brothers, who will perform at the Tacoma Dome this weekend as part of their “Happiness Begins” tour.

In the country world, Jason Aldean and Thomas Rhett are both still in the midst of their late summer/early fall treks, with gigs at Globe Life Park and Bridgestone Arena, respectively.