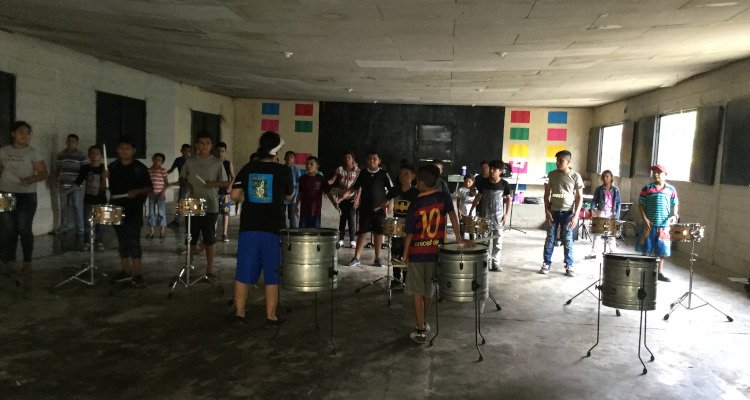 Photo courtesy of Music for Purpose

Banuelos, who is majoring in Songwriting at Berklee Online, started her nonprofit Music for Purpose after attending the funeral of a friend. He died of epilepsy, which is a condition that she also suffers from, and it led her to realize not only the fragility of life but also the need to live a purposeful one.

“At his funeral,” she says, “I just changed. It’s like I morphed into someone different. I made a promise that I would live the rest of my life purposefully . . . so I started providing my community with free music summer camps.”

While Music for Purpose started with music training in Banuelos’ hometown of Vista, California, she then decided to offer the same type of program to orphans and at-risk children in Honduras.

Initially, Banuelos raised funds for the effort through benefit concerts that took place across the United States. With this money, she started the school in the Honduran town of San Pedro Sula in 2015, where she still personally teaches.

She also gives the children there both a sense of purpose and a safe place to go.

This is important as the country is said to have the highest rate of murder and sexual violence in the world. What’s more, after-school programs and parental supervision are lacking, leaving the children even more vulnerable.

“They’re poor and so a lot of the entertainment comes from the gang members,” she says. “Every child wants to matter. So, who are the ones that are going to entertain these children that want to matter? The gang members. So, I’m there to keep them busy. I’ve been building a drum line and we basically fund ourselves.”

For those who would like to help, Banuelos is currently raising money to buy 17 new trombones, trumpets and cornets through a GoFundMe campaign.