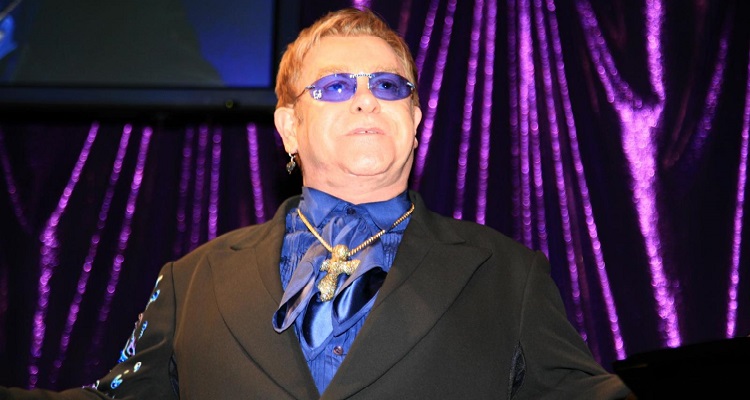 The most popular concert tickets, tour stops, and artists around the country, based on SeatGeek data through Wednesday, November 13th. 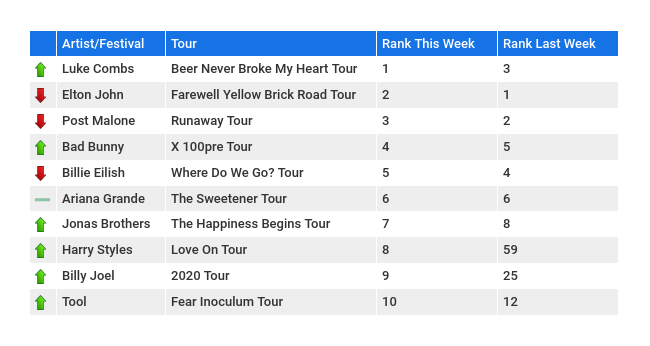 Elton John is still serenading fans around the country one last time on his “Farewell Yellow Brick Road Tour.” The iconic pianist has just added 24 dates to the seemingly never-ending trek, with additional shows in Toronto, Chicago, Fargo, ND and Hershey, PA.

After a strong showing at Posty Fest earlier this month, rapper Post Malone is as on top of his game as he’s ever been. You can catch him on the “Runaway Tour” this weekend: on Friday he and Swae Lee will perform at the Gila River Arena in Glendale, AZ, and on Sunday they’ll head to the Pepsi Center in Denver, CO.

Bad Bunny is in the midst of his new “X 100Pre Tour” dates, which will see the Latin superstar throughout parts of the South, Southwest and East Coast. Fans living in Phoenix will get a taste of the musician when he performs at the Talking Stick Resort Arena this weekend. 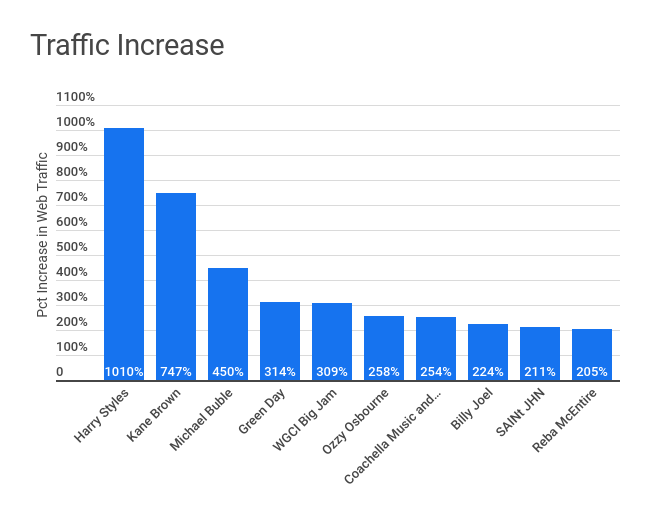 Harry Styles is back in the spotlight. The former One Direction standout will hit the road next summer for the “Love on Tour” trek, which will make its way around the United States, Europe and Mexico. The US leg begins on June 26 in Philly and wraps up on September 5 in Las Vegas.

Rising country star Kane Brown announced dates earlier this week for the 2020 “Worldwide Beautiful Tour.” Joined by Chris Lane as support, the tour kicks off in the United States on February 29 in Atlantic City, NJ. It runs through May 9 in Kansas City at the Sprint Center.

The winter holidays are drawing nearer, and that can only mean one thing: Michael Buble is going on a Christmas concert tour. “An Evening With Michael Buble Tour” features 27 stops, including performances in Boston, Milwaukee, Austin and Las Vegas to name a few.

Green Day have a massive year coming up. Not only are they hitting the road with Weezer and Fall Out Boy for the “Hella Mega Tour,” but they’re also gearing up to release a new album dubbed Father of All Mother F**kers on February 7. To sweeten the pot even more, they band just announced that their side project, The Coverups, are performing a show on December 6.

On Friday, December 20 at the United Center in Chicago, Migos, Dababy, G Herbo, Wale, Megan Thee Stallion, Yella Baby, Jacquees and Tink will all take the stage for this year’s WGCI Big Jam concert event. Tickets are on sale now starting at just $40. 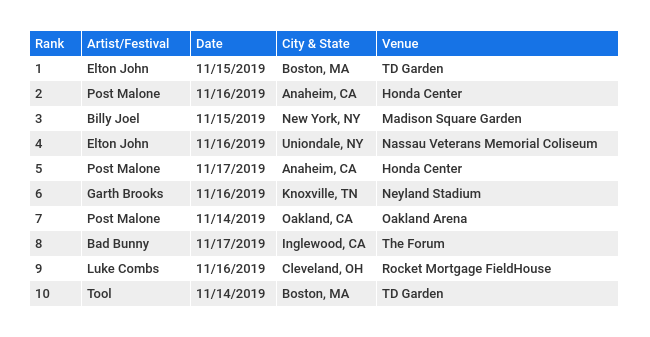 It’s the usual cast of icons topping this week’s list of most popular upcoming concerts, with Boston and Long Island-dwelling Elton John fans clambering for their last chance to see him live when he performs at TD Garden and Nassau Veterans Memorial Coliseum, respectively. For piano-loving fans not attending the Elton shows this weekend, they can instead try to catch Billy Joel in NYC for another concert as part of his lifetime Madison Square Garden residency.

Post Malone will take his “Runaway Tour” to California this weekend, performing two nights at the Honda Center in Anaheim, plus a Thursday show in Oakland. Meanwhile, Garth Brooks is taking a break from performing at dive bars to instead perform on Saturday at the massive Neyland Stadium in Knoxville, TN. Not digging the piano players, Posty or Garth? Tool’s “Fear Inoculum Tour” is underway, with highly-anticipated show at TD Garden in Boston going down this weekend.