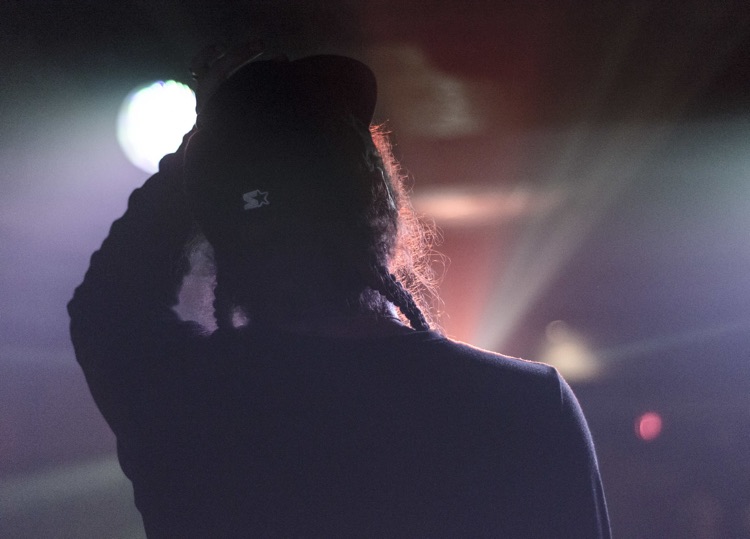 The most popular concert tickets, tour stops, and artists around the country, based on SeatGeek data through Wednesday, December 4th. 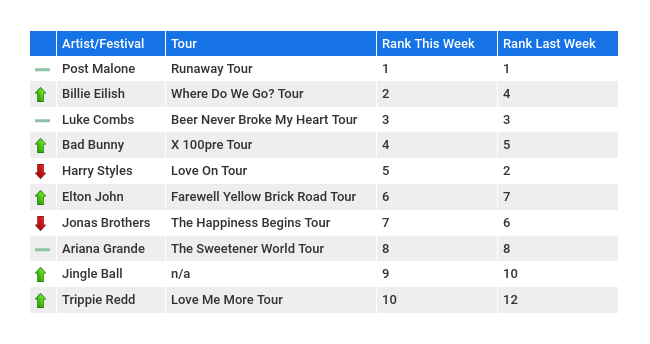 The only way you’ll see Billie Eilish perform live this year is if you’re planning on attending one of the two Jingle Ball concerts she’ll be at this winter.  Otherwise, you’ll have to wait until 2020 when her “Where Do We Go? World Tour” kicks off.

Bad Bunny is in the midst of his new “X 100Pre Tour” dates, which will see the Latin superstar throughout parts of the South, Southwest and East Coast. Fans living in the New York City area can see him this Friday at the Barclays Arena. 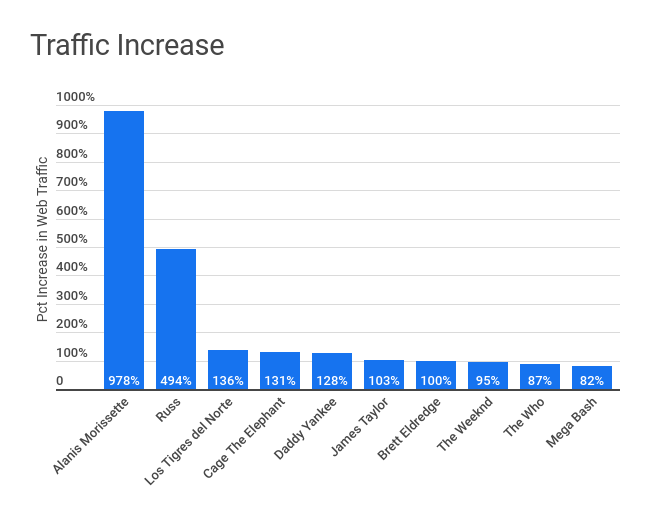 Alanis Morissette has just announced dates for a 25th-anniversary tour of her seminal album, Jagged Little Pill. Joining her as openers for the duration of the trek are Garbage and Liz Phair. The tour is slated for the summer of 2020.

Rapper Russ has just announced details behind a new album and tour of the same name. The “Shake the Snow Globe Tour” kicks off on May 1 in Seattle and wraps up on June 26 in Atlanta. His new album is due out on December 6.

It’s almost time for festival season, and you  know what that means: festy lineups are abounding. Among them is Cage the Elephant, who has been tapped to perform at this year’s Hangout Fest in Gulf Shores, Alabama from May 15-17.

Not only did Daddy Yankee just open up a museum (about himself) in San Juan, but he also just topped YouTube’s year-end music videos chart. Check out for him on the road soon. 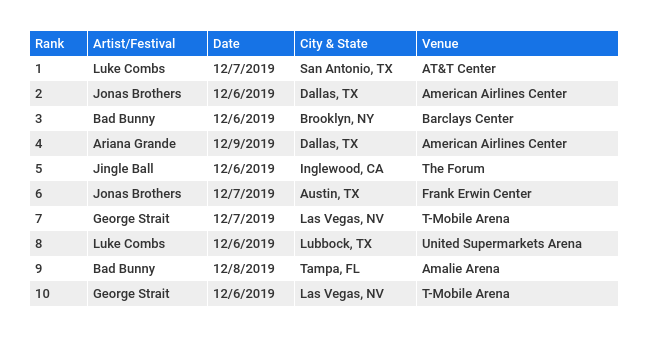 Luke Combs leads the charge this week with his performances this weekend in Lubbock, TX and San Antonio, TX. Also on the list is the Jonas Brothers with stops at the American Airlines Center in Dallas and the Frank Erwin Center in Austin. Ariana Grande will also perform at the American Airlines Center as part of her “Sweetener Tour.” Jingle Ball makes its major stop at The Forum in inglewood, CA, and includes headliners like Taylor Swift and Billie Eilish.

Bad Bunny will perform at the Barclays Center in Brooklyn and the Amalie Arena in Tampa as part of the last two stops on his “X 100pre Tour.” Iconic country singer George Strait will play two nights at the T-Mobile Arena in Las Vegas this Friday and Saturday, as well.