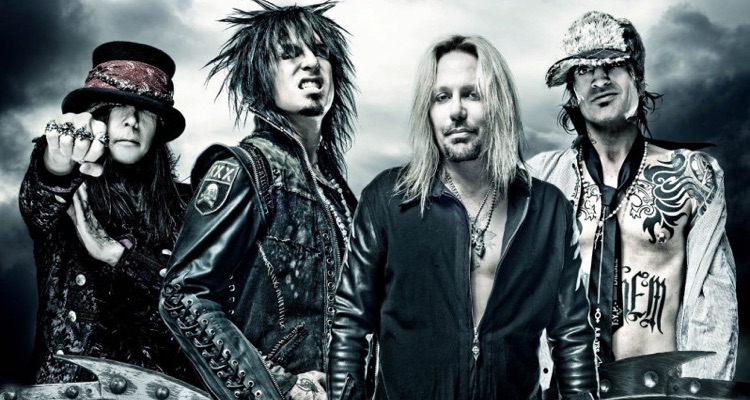 The most popular concert tickets, tour stops, and artists around the country, based on SeatGeek data through Wednesday, December 11th. 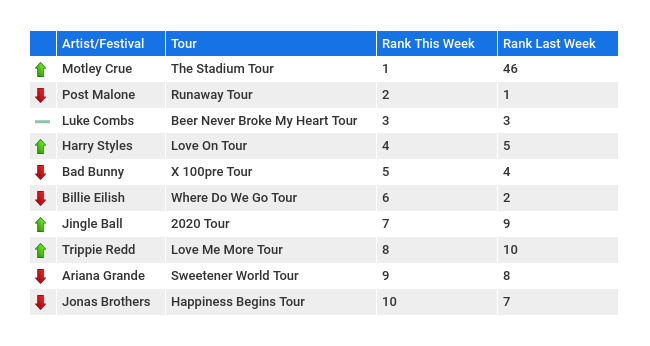 Motley Crue, Def Leppard, Poison and Joan Jett are hitting the road next year for an epic stadium tour. Catch them starting in Miami at the Hard Rock Stadium on July 7 through September 5 at the SoFi Stadium.

Bad Bunny has finally wrapped up his “X 100Pre Tour” dates, which saw the Latin superstar throughout parts of the South, Southwest and East Coast. Stay tuned for when he announces new dates. 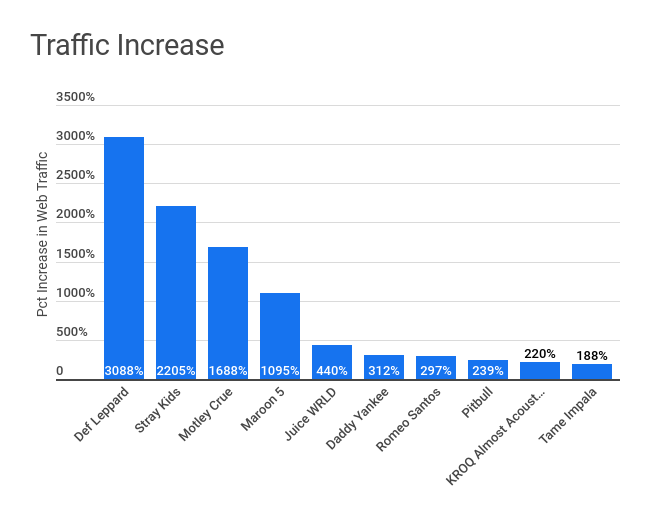 Def Leppard are back in the spotlight after the announcement of “The Stadium Tour” with Motley Crue, Poison and Joan Jett. The massive production runs up through Florida to Charlotte’s Bank of America Stadium before the roadshow pulls into San Francisco to play Oracle Park.

The newest K-Pop sensations, Stray Kids, are hitting the road on the World Tour District 9 tour.  The tour kicks off on January 29 in New York, NY and wraps up on February 16 at the Los Angeles Microsoft Theatre.

Motley Crue will hit the road with Def Leppard, Poison and Joan Jett next year for “The Stadium Tour.” Catch them starting in Miami at the Hard Rock Stadium on July 7 through September 5 at the SoFi Stadium.

Maroon 5’s 2020 tour will kick off on May 30 at Chula Vista’s North Island Credit Union Amphitheatre. Leon Bridges and Meghan Trainor will be on deck as support for the trek, which wraps up on September 17 in Tampa, FL.

Unfortunately, Juice WRLD — born Jarad Anthony Higgins — is in the news this week for all the wrong reasons. The rising rap star suffered a medical emergency at the Chicago Midway Airport last Sunday and passed away. His album, Death Race for Love, was released earlier this year. 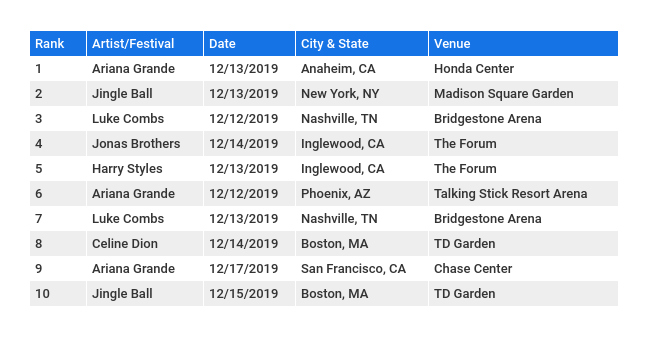 Ariana Grande leads the charge this week, with three major upcoming concerts giving fans major excitement. On Thursday, she’ll perform at the Talking Stick Resort Arena in Phoenix, AZ, followed by a show in Anaheim, CA at the Honda Center. Next week, she’ll take the stage at the Chase Center in San Francisco, CA. Meanwhile, the Jonas Brothers are still on the “Happiness Begins Tour,” which sees them at The Forum in Inglewood, CA on Saturday Night.

You know who else is performing at The Forum? Harry Styles, just the night before!

Jingle Ball is underway, and with its stellar lineup, it’s no surprise that tickets are in high demand. It’ll make its way to New York City on Friday Night and Boston on Sunday. Luke Combs is still in the midst of his “Beer Never Broke My Heart Tour,” with two nights at Nashville’s Bridgestone Arena coming up this weekend.