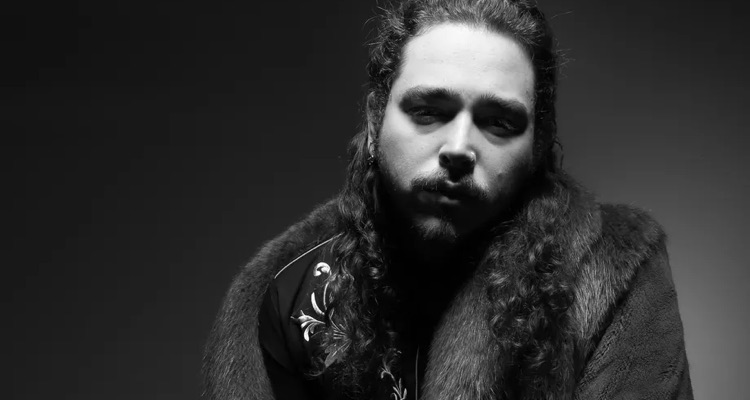 The most popular concert tickets, tour stops, and artists around the country, based on SeatGeek data through Wednesday, January 8th. 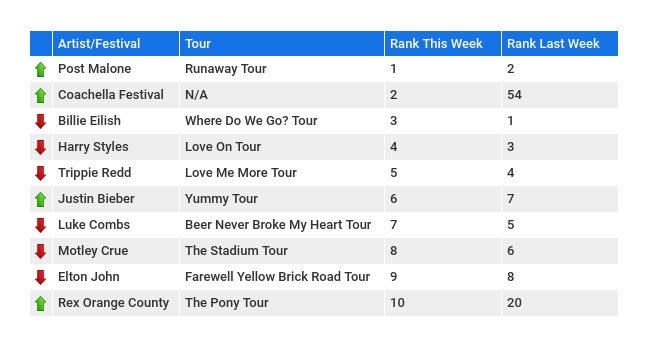 Post Malone is as popular as ever due to his new album, Hollywood’s Bleeding, and his current “Runaway Tour.” The tour will pick back up in February 2020, and is currently slated to run through June 25 in Salt Lake City at the Vivint Smart Home Arena.

Lil Mosey has dropped a video ft. Trippie Redd, “Never Scared,” right in time. Trippie Redd will be hitting the road for the “Love Me More Tour” in just a few weeks, kicking things off on January 22 at the Showbox SODO in Seattle. 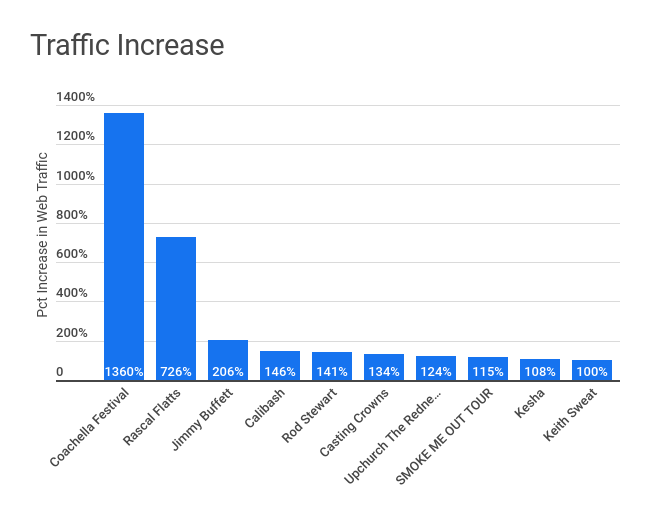 California’s annual Coachella Festival has announced details for its 2020 edition. Enjoy headliners Frank Ocean, Tame Impala and a Rage Against the Machine reunion this April in Indio.

After an impressive run in the country music biz, the legendary trio Rascal Flatts are calling it quits. The band has announced details behind the “Life is a Highway” farewell tour, which is slated to kick off on June 11 in Indianapolis, IN.

The margarita man himself, Jimmy Buffett, has announced another batch of tour dates slated for 2020. The “Slack Tide Tour” will kick off on April 16 with intermittent performances throughout the year.

Fans of Calibash, rejoice. The singing sensation will be appearing live three times this month, alongside Bad Bunny and Rosalia. The first two performances will take place at the Staples Center in Los Angeles on January 11 and 12, followed by a concert at T-Mobile Arena in Vegas on January 25.

Rod Stewart has just revealed his 2020 touring plans. In between long stretches holding down his residency at Las Vegas’ Caesars Palace, Stewart will tour North America for several months. The first of his traveling shows this year comes at the Hard Rock in Hollywood, Florida. 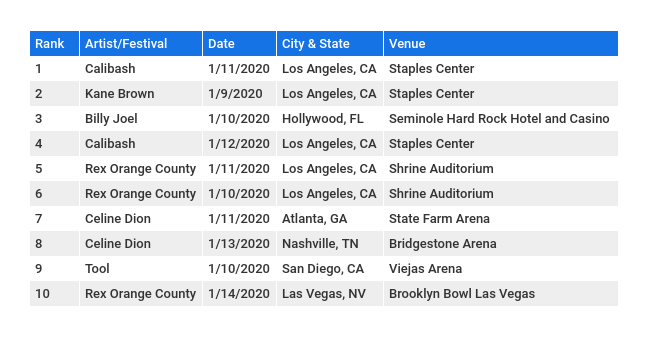 It’s a hotbed of activity in Los Angeles this week, with top performers filling in seats at some of the city’s top venues. On January 11, Calibash (alongside Bad Bunny and Rosalia) will take the stage at the Staples Center, where just two days before Kane Brown will have also sold out the stadium. Calibash will do it again on January 12, with yet another performance at the iconic City of Angels venue.

Rex Orange County, well into his “Pony Tour,” is also performing in LA, only he’ll be at the Shrine Auditorium on January 10 and 11. Or, you can travel a couple hours south and see Tool take the stage at the Viejas Arena in San Diego on January 10. Billy Joel will be in the other hot part of the country, Florida, for a gig at the Seminole Hard Rock Hotel and Casino. You can also catch Celine Dion, first at the State Farm Arena in Atlanta and then the Bridgestone Arena in Nashville.