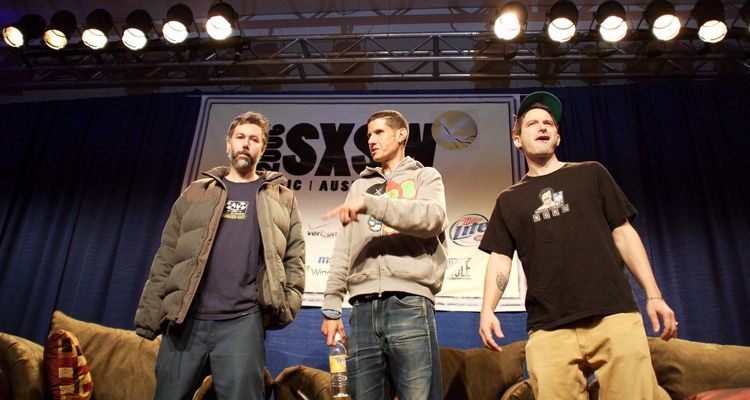 Apple TV+ has snagged the rights to ‘Beastie Boys Story,’ an upcoming documentary about the rap trio.

Produced by Spike Jonze, the movie stars Adam Horovitz and Mike Diamond, who discuss the group’s 40-year history. Jonze describes the film as a live documentary, as it was shot at Brooklyn’s Kings Theater. Both Horovitz and Diamond pay tribute to Adam Yauch, who lost his battle with cancer at age 47 in 2012.

‘Beastie Boys Story’ will debut in IMAX theaters on April 3 and will be exclusive to Apple TV+ on April 24.

The film draws heavily from the Beastie Boys Book, which was released by Random House in 2018. The book is a retrospective from Horovitz and Diamond about their life at the height of the group’s popularity.

This documentary isn’t the first time Jonze has worked with the group, either. In 1994 he directed the music video for Beastie Boys hit “Sabotage.” Horovitz and Diamond shared a statement about working with Jonze to produce the documentary.

“There are some friends you have lunch with so many times over the years, you know their order,” Horovitz stated. “Spike is one of those friends. And even when you don’t recognize anything on the menu, he comes up with something good for the whole table. Like when we wondered what to do when our book comes out… then Spike placed his order: You will put on a show for the children.”

Jonze says he’s thrilled to be working with Horovitz and Diamond on the film. “It was a real privilege to get to reunite with them and help them tell their story,” he said in the press release.

The documentary’s release date coincides with the 26th anniversary of the album, Ill Communication. Jason Baum, Amanda Adelson, and Spike Jonze are all producers for the upcoming documentary. The documentary is a production of Fresh Bread and Pulse Films in association with Polygram Entertainment.