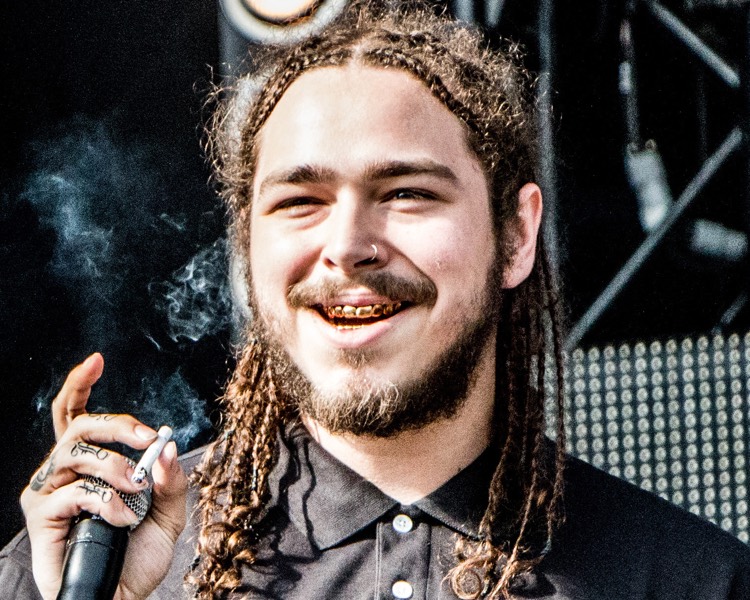 The most popular concert tickets, tour stops, and artists around the country, based on SeatGeek data through Wednesday, January 15th. 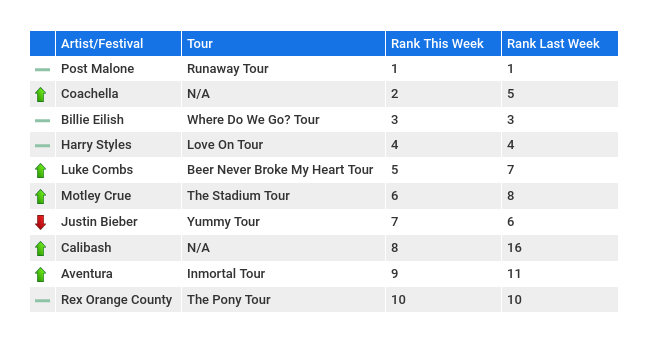 Post Malone is as popular as ever due to his new album, Hollywood’s Bleeding, and his current “Runaway Tour.” The tour will pick back up in February 2020, and is currently slated to run through June 25th in Salt Lake City at the Vivint Smart Home Arena.

Luke Combs has been tapped to join Tim McGraw for two shows on his summer tour. See the “Beer Never Broke My Heart” singer on September 4 in Los Angeles and September 12 at Citizens Bank Park. 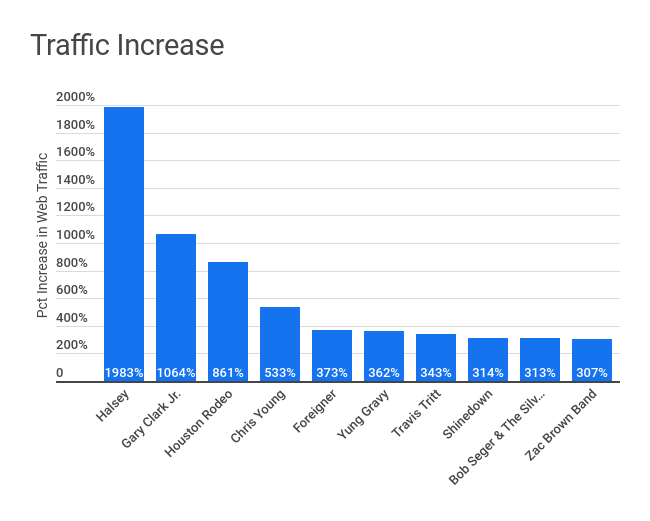 Halsey has announced dates behind the “Manic World Tour.” The fun begins on June 2 at Seattle’s White River Amphitheatre and wraps up on August 1 with a show at the FivePoint Amphitheatre in Irvine, CA.

Gary Clark Jr. has been in the news lately after guitar god Eric Clapton praised the Texas musician. Clark is also nominated for four Grammy Awards – set to air next week – including Best Contemporary Blues Album and Best Rock Song.

The lineup for this year’s Houston Rodeo was announced and boy is it a doozy. Fans will have the chance to see Willie Nelson, Midland, Maren Morris, Kane Brown and Gwen Stefani, to name a few. Other artists are still TBA; tickets are on sale now.

Chris Young has announced dates behind the “2020 Town Ain’t Big Enough World Tour.” Catch the country singer starting May 28 in Detroit, MI at the DTE Energy Center, followed by stops throughout the US. The tour ends on September 26 in Cincinnati, OH.

Foreigner is hitting the road next summer for the Juke Box Heroes tour. Catch them starting July 9th in Albuquerque, NM followed by shows throughout the West Coast, Midwest, and East Coast. It wraps up with a run through Texas, culminating on September 13th in Austin. 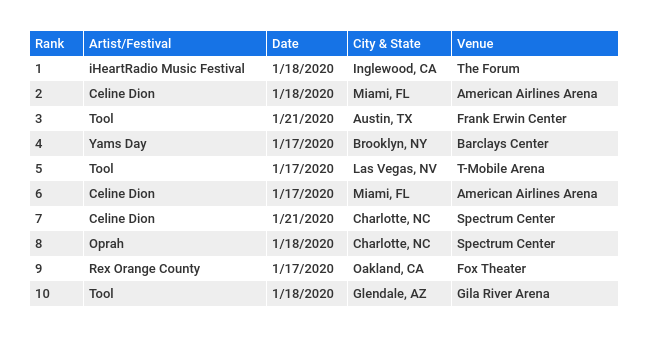 Want to see Coldplay, Billie Eilish, the Black Keys and more of today’s hottest performers? Then you’ll want to head to the iHeartRadio ALTer Ego Music Festival on January 18. It’s held at The Forum in Inglewood, CA. Tool kicks off their second leg of the “Fear Inoculum Tour” this weekend, with shows in Austin at the Frank Erwin Center, Las Vegas at the T-Mobile Arena, and at the Gila River Arena in Glendale, AZ.

Celine Dion is also dominating the top spots this week, with sold out shows in Miami at the American Airlines Arena in Miami and the Spectrum Center in Charlotte, NC. Also taking the stage at the Spectrum Center earlier in the week is Oprah as part of her “2020 Vision Tour.” Rex Orange County will perform at the Fox Theater in Oakland as part of the “Pony Tour.” A$AP Mob and friends have just announced the Yams Day concert, held at the Barclays Center in Brooklyn, with additional artists to be added soon.