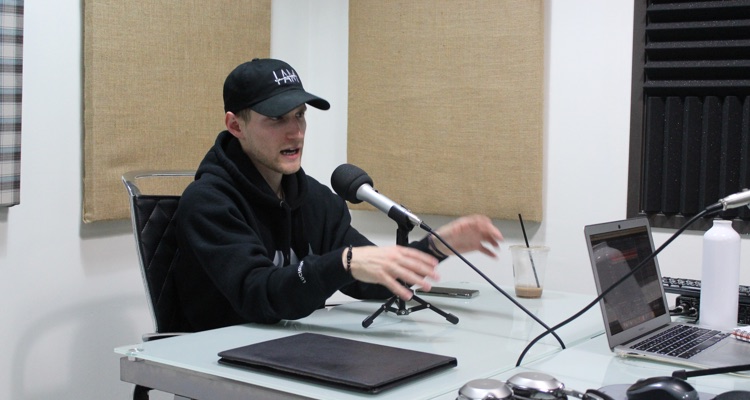 Lucidious is an independent rapper with more than 100 million Spotify streams and a steady income. He’s also a guy helping his fans deal with serious issues of depression and suicide.

What?  You’re not subscribed to the Digital Music News Podcast?  We’re available on Apple Podcasts, Spotify, Google Play, Stitcher, and most other podcast platforms.  Or, simply listen to the embed below.

Lucidious is an artist who said ‘fuck it’ — with some proper planning.

He ditched his ‘Plan B’ day job, packed his belongings into a U-Haul, drove to Los Angeles, and eventually reached a point where he could live off of his music. But he warns artists not to quit cold-turkey — especially since developing a career takes money. Instead, Lucidious waited — and worked —until his musical career was generating enough cash, then he quit. “I was at the point financially with music where there was literally no excuse for me to have a job,” he said.

But he never planned to ‘fall back’ on his Plan B. “If I have to, I’ll have two jobs. But I’ll never stop making music — because it’s not a choice, and that, in my opinion, is what a real artist is.”

“This is my journal, this is my therapy.  I have to do this.  Because if I don’t, I wouldn’t be alive right now.”

It’s a subtle difference in life-planning. In one scenario, Plan B is a fallback if things don’t work out. In Lucidious’ world, Plan B is only there to make Plan A into a reality. And giving up on Plan A isn’t a viable option — ever.

Part of Lucidious’ success comes from the deep connection he’s developed with his fans.

His verses are emotionally raw, stripped of any pretense, and totally heartrending, with personal struggles a pervasive topic throughout.  This isn’t typical rap bravado, it’s a form of therapy, and his fanbase has responded accordingly.

They also reach out to him for help, recognizing a kindred soul.  Sometimes, that somebody is on the brink of suicide.

Lucidious told us that he responds to as many messages as humanly possible. “If I open my phone right now, and I scroll for less than a minute, or maybe even thirty seconds, I can open one of four messages, that will say you saved my life, or you changed my life, like, significantly, not just ‘you boosted my mood today.”

“It’s almost always related to ‘I had a divorce after 10 years, lost my kids, like, thank you for getting me back on track,’ or, ‘I’m extremely anxious and I’ve lost a lot of friendships, you showed me that I can actually get help and work through this, thank you.'”

I asked him how many fans have contacted him on the brink of suicide.  He said it’s impossible to say, but it’s a constant in his daily interaction with his fans.  “The actual saved lives, I mean suicidal, darkness, I can open my phone at any given time, to a message of somebody, a new message of somebody sending me that,” Lucidious said.

That includes people right on the ledge.  “Those are really hard for me to take in.  I’m like, ‘oh man, I’d better say the perfect words right now’.”

But getting someone on the line means there’s a considerable chance of saving a life. “The real people that commit suicide do not reach out,” Lucidious said. “Or, even threaten it. They’re usually the people that hide it so well, you think they’re happy.”

Sadly, Lucidious is a sorely-needed artist in modern times.

“I do wish there was more of a spotlight on mental health,” Lucidious continued.  “I’m not doing that for my career or to grow my music.  I’m doing it because I care — I know what it feels like to feel that way and it’s a soul calling, beyond music.  I love music, but I love this whole personal development, helping people shift their perspectives.  I’ve definitely dedicated part of my journey to that process.”

Here’s our podcast interview with Lucidious.

Check it out on Apple Podcasts, Spotify, Google Play, Stitcher, or below.