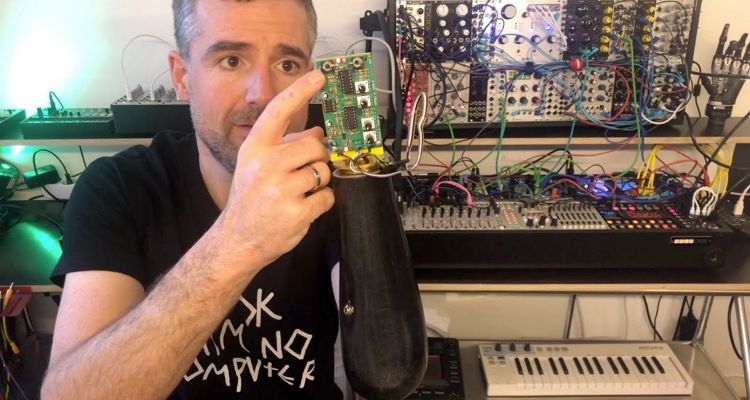 Forget AI as the next technology-driven frontier in music – this guy plays music with his mind, using his prosthetic arm to generate signals.

Bertolt Meyer, an electronic musician, uses a myoelectric prosthetic arm. Small electrodes attached to his arm pick up impulses generated by contracting his muscles. Those impulses are then translated into control signals for his prosthetic.

Meyer found himself wondering if the prosthetic’s control signals could be adaptable enough to control other devices. So he tried it out with one of his modular synthesizers. He took apart an old prosthetic and found that the voltages were too small. The KOMA Elektronik Field Kit features a section that amplifies weak voltages to make them suitable for CV use.

He swapped out the prosthetic hand for a DIY controller, allowing him to play music by thinking about it. Meyer describes the process in a YouTube video.

“Together with Christi from KOMA Elektronik and my husband Daniel, I am in the process of building a device,” he writes. He calls it the SynLimb. “[SynLimb] attaches to my arm prosthesis instead of the prosthetic hand. The SynLimb converts the electrode signals that my prosthesis picks up from my residual limb into control voltages for controlling my modular synthesizer.”

Meyer says the process of playing music this way feels like controlling the synthesizer with his thoughts. He can control the rotation and grip of the prosthetic hand using the CV signals.

KOMA Electronik worked with him to create a custom PCB with two channels of amplification.

He can send thoughts to the muscle electrodes, generating two channels of CV. That signal then converts into anything using the modular controller. This unique way of creating music isn’t something just anybody can pick up, though.

Meyer was born without the lower half of his arm. He has been using a prosthesis in his everyday life for years, giving him plenty of experience. You can listen to some of Meyer’s mind-generated music on his SoundCloud.