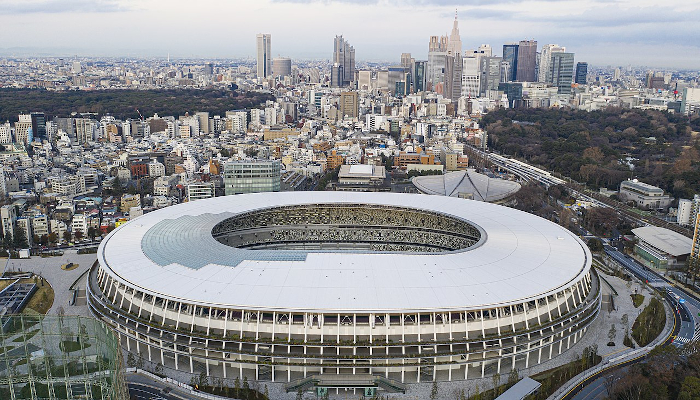 The newly built Japan National Stadium in Tokyo, where a portion of the rescheduled 2020 Olympics will take place.

In what is likely the most significant coronavirus-prompted postponement to date, Olympic officials and Japanese Prime Minister Shinzo Abe have agreed to delay the Summer Olympics until 2021.

The Tokyo Olympics had previously been slated to initiate on July 27th, and earlier this month, Olympic higher-ups indicated that the multi-day sporting competition would proceed as planned. However, recent coronavirus (COVID-19) developments inspired a change of plans, and it was determined that the 2020 Summer Games would likely pose a threat to athletes, attendees, and staff.

Prime Minister Abe and International Olympic Committee (IOC) President Thomas Bach finalized the postponement today, following longtime IOC member Dick Pound’s revealing yesterday that a delay was imminent. Now, the Tokyo Olympics are tentatively scheduled to begin before or during the summer of 2021; the IOC plans to release additional details and information in the coming month.

Earlier this week, Olympic athletes voted in favor of postponing the 2020 Summer Games. The vote took place during a U.S. Olympic and Paralympic Committee town hall event; 125 athletes participated in the vote, and about three-quarters of the group supported a delay.

The postponement is unprecedented in Olympic Games history. While World War 1 and World War 2 resulted in the cancellation of three Summer Olympic events, this is the first time that the Summer Games have been pushed back to a later date.

The coronavirus pandemic has impacted governments—and people—around the world. Having first appeared in Wuhan, China, late last year, the novel coronavirus and the disease it causes, COVID-19, have since spread to each continent except Antarctica.

Medical professionals have diagnosed over 400,000 COVID-19 cases, but the actual number of infected persons is thought to be much higher. Multiple medical supply companies and hospitals are working in coordination with the federal government to produce additional COVID-19 test kits, and the diagnosis count will increase as these test kits become available.

The United States has identified approximately 50,000 COVID-19 cases. Significantly, over half of these infections are attributable to New York State.