What Succeeds on Spotify’s RapCaviar — A Statistical Analysis 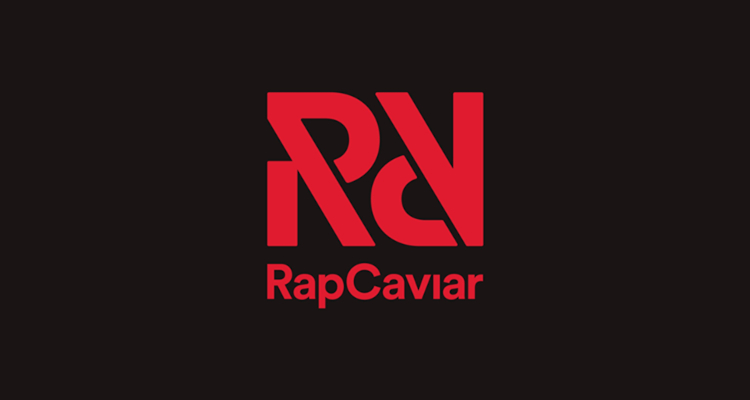 With more than 13 million followers to its credit, Spotify’s foremost hip-hop playlist, RapCaviar, can change the trajectory of both individual tracks and entire careers. Bearing this in mind, AI-powered music analysis and recommendation platform Musiio recently undertook a data-centered look at the type of rap that stands the best chance of scoring placements and succeeding on the playlist.

Singapore-headquartered Musiio has developed a rigorous, AI-based analytical system capable of quickly dissecting a song by thousands of characteristics. The comprehensive song-specific information is then used to organize massive catalogs and deploy smarter recommendations.

“If the human ear can hear it, we can teach our AI to tag it,” Musiio commercial director Mack Hampson told Digital Music News.

Employing a spectrogram breakdown to perform these analyses, Musiio tags approximately one million tracks per day – a sum that reflects the colossal cumulative output of the modern music landscape. To be sure, Spotify alone adds nearly 300,000 tracks to its library each week (it would take about 2,000 hours to listen to one day’s worth of new Spotify music).

Predictably, Musiio issued strong hip-hop classification scores to the vast majority of the RapCaviar playlist’s tracks from June 2020; a large number of the analyzed works received a perfect match probability (100) in the category. Saweetie’s “Tap In” recorded the lowest hip-hop match probability of the listed songs, 57 out of 100, presumably because of its relatively relaxed vocal style.

In terms of sub-genres, aside from hip-hop, the lion’s share of RapCaviar songs received high trap music probabilities. Known instrumentally for its minimalism and synthesized drums, trap music defined 46 of the playlist’s 58 works – nearly 80 percent – and of these 46 trap songs, 35 scored 50 or above in match probability. 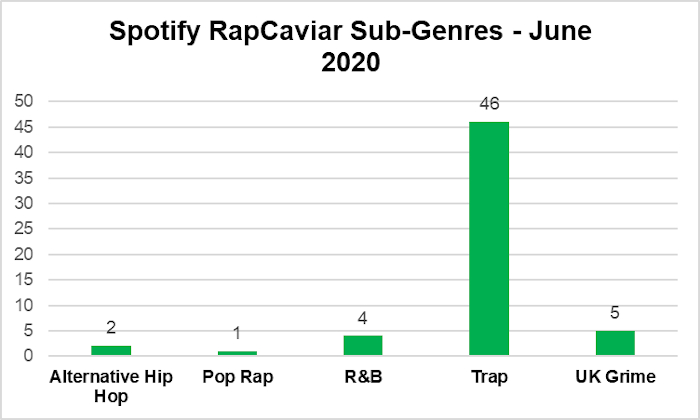 Musiio also identified a telling trend in the mood and beats per minute (BPM) of RapCaviar songs, which are generally powerful and quick-moving.

Aside from powerful, other moods classified under Musiio’s system consist of — but aren’t limited to — neutral, dark, dramatic, energetic, and happy. The data reveals that 40 of the playlist’s tracks (69 percent) are primarily powerful in mood, 10 have quirky moods, five are relaxed, and three are angry.

RapCaviar placements’ BPM also appear to be on the rise, compared to the historic average of 85 to 115 BPM in hip-hop music. (The figures are, admittedly, not set in stone; Kanye West’s “Runaway” barely crosses the former number with its 86 BPM, and also on My Beautiful Dark Twisted Fantasy, “Power,” at 152 BPM, exceeds the 115 BPM top number.)

Polo G and Juice WRLD’s “Flex” has the highest BPM, 165, of any RapCaviar song from June. More broadly, 43 of the works (74 percent) maintain a BPM above the upper end of the aforementioned scale, and just two, NLE Choppa and Roddy Ricch’s “Walk Em Down” (84 BPM) and Drake’s “Toosie Slide” (82 BPM), are beneath 85 BPM. 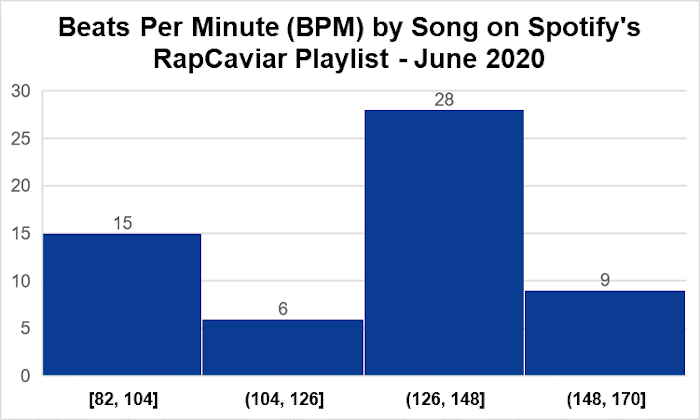 Other similarities are more pronounced among the RapCaviar tracks.

All the tracks possess a large vocal presence, and only two of the placements – Pop Smoke and Rowdy Rebel’s “Make It Rain” and Lil Skies’ “Riot” – have a high energy level, with the remaining works featuring a medium energy level.

Lastly, a deceivingly significant 26 RapCaviar songs (nearly 45 percent of those on the playlist in June 2020), by artists like Drake, Lil Uzi Vert, and Sheff G, are primarily powerful, secondarily quirky or angry, and encompass over 115 beats per minute, according to Musiio. Theoretically, musicians looking to secure RapCaviar placements could tailor their tracks in response to these points, if only by avoiding technical characteristics that are statistically unlikely to produce positive results.