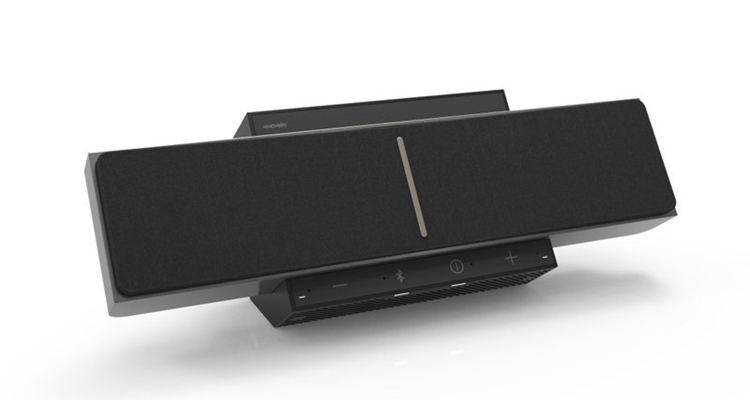 A new sound technology can send a sound bubble to your head using sound beaming — no headphones are required.

Noveto Systems, an Israeli start-up, is debuting the new futuristic audio tech with a new desktop device. The device can beam sound directly to a listener without the need for headphones or earbuds.

The company provided a short demo of the new technology to reporters of the Associated Press. The new SoundBeamer 1.0 launches today with what the AP describes as sound “straight out of a sci-fi movie.” The SoundBeamer device sends 3D audio that feels like it’s inside of your ears, in front of them, and behind them — at the same time.

Noveto says it believes SoundBeamer has plenty of practical use applications. From allowing office workers to listen to music or conference calls to playing a game in a room while others watch a movie.

So, how does Noveto Systems’ futuristic sound beaming technology work?

The SoundBeamer users a 3D sensing module that locates and tracks the user’s ear position. It then sends the audio via ultrasonic waves to create sound pockets enveloping the user’s ear. The sound delivered in this manner can be heard in stereo or spatial 3D audio for the listener.

AP says during its short demo, nature clips of swans on a lake, bees buzzing, and a babbling brook played. Users described the sensation of actually feeling as though they were part of the scene. In another demo, a product manager could not hear gunshots in a gaming demo playing for someone else. That’s the goal of sound beaming tech, localized sound for the user-only.

“You don’t believe it because it sounds like a speaker, but no one else can hear it,” says Product Manager Aya Wallwater. “It’s supporting you, and you’re in the middle of everything.” So what happens when you move your head around – like playing a game or watching a horror movie? Noveto says a setting allows the sound to follow the listener when they move their head. The ‘sound beam’ can also be fixed, so you can walk in and out of hearing it.

The SoundBeamer is the first consumer branded product with this sound beaming technology.

But 3D spatial audio is something companies like Apple and Sony are working on perfecting. Sony’s 360 Reality Audio format creates much the same feeling of being surrounded by audio – but you need headphones. Sound beaming may be a game-changer in the future, especially in AR and VR applications.