Rapper Dupree G.O.D. Arrested for Shooting a Flamethrower From the Top of a New York City Bus 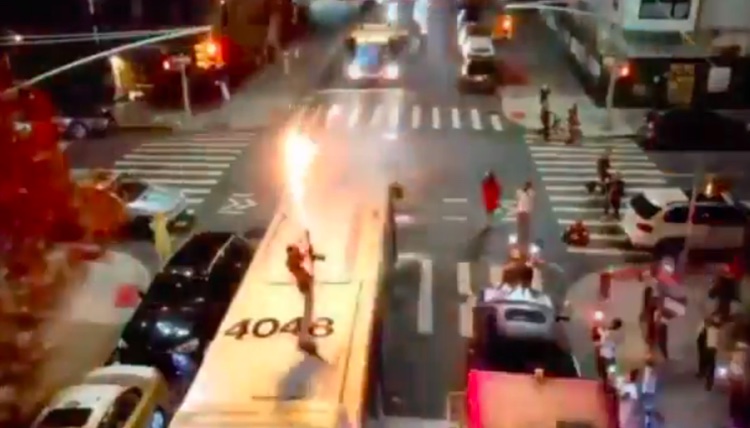 Footage of Dupree G.O.D. shooting the flamethrower atop a New York City bus.

Brooklyn rapper Dupree G.O.D has been arrested for shooting a flamethrower while standing on top of a city bus.

The rapper’s lawyer, Cary London, says his client voluntarily turned himself in at an NYPD precinct for the act. In a clip of the incident that was posted online, a shirtless Dupree jumps from an ice cream truck to the bus. He then shoots the flamethrower into the air, sending flames arcing above the crowded bus. He then turns and shoots the flames towards the ground.

“‘Wutang’ music video shoot was insane. It was a movie. It was f—king epic,” he wrote on Instagram shortly after the shoot. “Much everyone to all who came out. We shut Franklin Avenue Down with amazing energy. We are in this together. We the ILLest. Video coming,” the rapper continued.

But the rapper’s attitude was subdued when he showed up to the 70th precinct for his arrest. He shook the hand of the NYPD officer who was taking him into custody. When asked what he thought when he made the video, he responded, “art man, art. It’s for the art. For the Wu-Tang,” he responded before being led into the precinct.

NYPD police were a little less flippant when discussing the incident with the press. “Let me ask you something, jumping on a bus, is that a controlled environment?” asked Chief of Detectives Rodney Harrison at the press conference after the arrest.

“And also, mind you, there were people on the bus as well. So I don’t know about you, but if my mother’s on that bus and somebody’s on the roof shooting a flamethrower, I’m gonna take that a little personal,” he continued.

Police responded to a 911 call made that night, reporting that a man with a flamethrower was on the loose. By the time the cops arrived at the scene, the bus and crowd were gone. At the time, the cops marked the 911 call as unfounded. Then a video of the incident appeared online, which you can see in the clip.

It’s clear that Dupree jumps from the ice cream truck to the bus before wielding the flamethrower. It’s done in a haphazard and dangerous manner – for bystanders and himself. He’s wearing no protection and wielding a device intended to shoot flames up to 50 feet away, often with a backblast.

It will be interesting to see how the ‘art’ defense plays out in court.