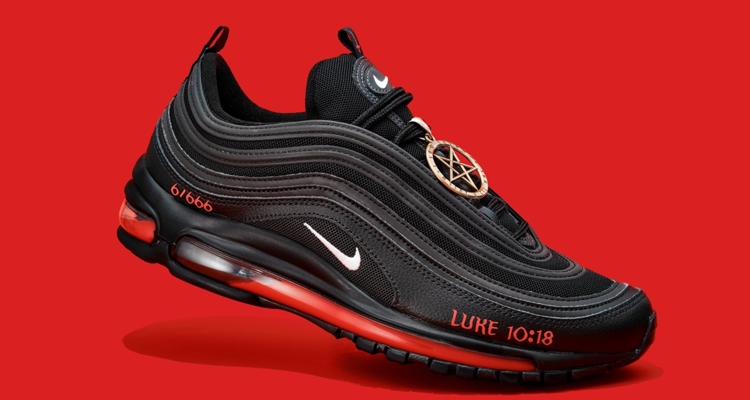 Rapper Lil Nas X released a custom ‘Satan Shoes’ sneaker collab, but Nike didn’t have anything to do with it.

The collaboration between Lil Nas X and the streetwear company MSCHF created a buzz on social media. The so-called ‘Satan Shoes’ feature a reference to the Bible verse, Luke 10:18. That verse references the fall of Satan from heaven, like lightning. Only 666 pairs of the limited-edition ‘Satan Shoes’ were available.

Lil Nas X’s Satan Shoes are a modified version of the Nike Air Max 97s. They are decorated with a pentagram pendant and cost $1,018 when they debuted. They were sold out shortly after going on sale. MSCHF says the sneakers contain a drop of human blood in each sole, drawn from willing members of the MSCHF team.

Some critics began directing some of their outrages at Nike since the logo is prominent. Nike had to address the situation by telling people that they are not involved in the collaboration at all. Instead, they’re custom adaptations of a product that anyone can buy. Think of it like taking a car into West Coat Customs.

The release of the Satan Shoes and Lil Nas X collab coincides with his latest single, “Montero (Call Me By Your Name).” The music video for that single has drawn additional criticism because Lil Nas X gives the devil a lap dance. The music video has been viewed more than 35 million times since it released on Friday. Pretty soon, Lil Nas X was responding to the controversy online.

He posted a YouTube video titled, “Lil Nas X Apologizes for Satan Shoe.” In the video, the rapper is holding the sneaker. But right before he begins speaking, it cuts to the clip from ‘Montero’ where he’s giving the devil a lap dance. The troll video has garnered even more backlash as new people discover it.