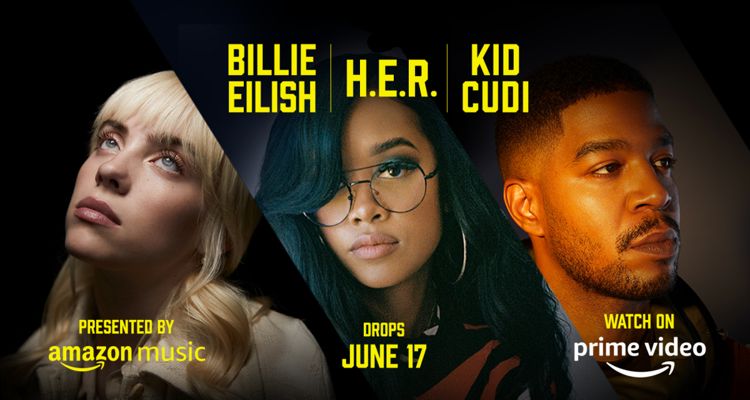 Amazon Prime Show Day is free for all this year – with Billie Eilish, H.E.R., and Kid Cudi performing.

The three-part musical event is presented by Amazon Music as part of Amazon’s Prime Day celebrations. All three episodes of the Prime Day Show will premier on Prime Video on June 17. The event will be available for Amazon customers to watch for 30 days – regardless of their Prime membership status.

This marks the first time Amazon has made its musical performances available to non-Prime members. Prime Day Show viewers will see three unique performances that fuse music and storytelling. Each experience will last around 25 minutes each and will feature performances from each artists’ latest album.

Billie Eilish will sing music from her new album, Happier Than Ever. H.E.R. will feature music from the album Black of My Mind, and Kid Cudi will perform songs from the album Man on the Moon III. Kid Cudi collaborated with the International Space Orchestra as his backing band. They’re the world’s first orchestra composed of space scientists from the NASA Ames Research Center.

Amazon says these Prime Day Show events will also be able to watch on IMDb TV, Twitch, and on various Amazon devices.

Billie Eilish is also launching a line of merchandise that will drop exclusively on Amazon on June 17. Fans can shop a collection of t-shirts, sweatshirts, posters, accessories, and more. Amazon says Prime Day 2021 is taking place over June 21 and June 22 this year. The retailer will offer 48 hours of deals.

All of these Prime Day events will definitely impact Amazon Music Unlimited’s ARPU – but Amazon has deep coffers. That’s why it’s supremely frustrating to watch Amazon pay artists millions to promote its Prime Day celebration – but it won’t license music for Twitch streamers.

Licensing music for Twitch streamers would help ensure artists get paid. It would also reduce streamers’ headaches surrounding the archaic DMCA policy Twitch has chosen to follow. It’s hard to reconcile that one-half of Amazon is so eager to work with the music industry while shunning the same industry with its game streaming service.