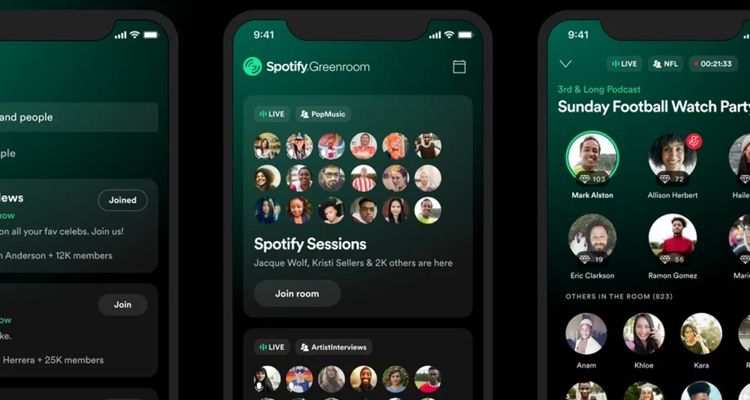 Greenroom is built on Locker Room, which Spotify acquired back in March. That app focused solely on offering sports fans a place to talk shop – but Greenroom expands that wheelhouse. The app has a green and black color scheme that is reminiscent of Spotify. It also includes the ability for hosts to record their shows and distribute them as podcasts.

While there is no integration with Anchor, one could assume that may come in the future. Spotify reportedly paid $154 million for Anchor in February 2019. The podcast creation tool has lagged behind competitors, and a report suggests Spotify is subsidizing most podcasts on the platform. Encouraging Greenroom hosts to use Anchor to distribute podcasts may help bolster those poor stats.

Users can sign up for Greenroom with their Spotify login, although it is not required.

The signup flow allows users to choose their interests from a wide variety of topics. Spotify is also announcing a Greenroom creator fund, though the details on that are not fleshed out. People who use the app will be paid based on how popular their rooms are and the engagement within them.

Exclusive deals with creators are also in the works, with announcements likely to come over the summer. It’s not clear how much money Spotify is dedicating to luring creators away from Clubhouse and Twitter Spaces. If you’re interested in hosting a room on Spotify Greenroom, you can find more information about the creator fund here.

Twitter, Facebook, Spotify, Slack, LinkedIn, Reddit, and Discord have all begun crafting social audio products. It’s a category that largely didn’t exist before March 2020, when Clubhouse launched. It has inspired a whole generation of Clubhouse clones.