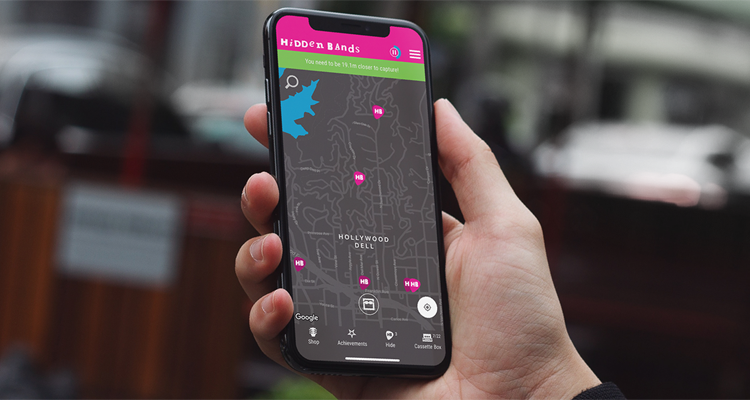 Think of it like geocaching new music. Or playing Pokémon GO, but the reward is new music instead of a new digital monster. For music superfans, Hidden Bands gives players a location-based augmented reality game to find, discover, and rate unreleased rock songs from up-and-coming artists.

Each week, Hidden Bands will release exclusive songs from new artists and place them digitally at real world locations. The songs appear as virtual cassettes in the app, which people can collect by visiting these real-world locations. Then can even rehide the cassette at a new location for other players to find, much like geocaching.

Every track is anonymous for the first two weeks in the game – the idea is to get people to listen and review the song without knowing the artist.

Revealing the artist later inspires a re-listen as fans engage with the app. Hidden Bands is designed to evangelize existing band fans into superfans and to give superfans more content with which to engage – keeping them in the loop on new releases.

Hidden Bands is now accepting applications from labels for custom challenges in its iOS and Android mobile apps. Labels can release artists’ songs into the app, allowing their biggest fans to head into the real world to find them using augmented reality and location-based technology. The concept is similar to the mobile AR game, Pokémon GO, but with a focus on new music releases.

“We bring the platform, the record label brings the music, and together we build a unique event to help their artists connect in a way they’ve never done before,” explains Michael Tenison, Co-Founder of Hidden Bands.

Music superfans can drive much of an artists’ revenue. According to research from MIDiA, 2/3rds of artist revenue comes from just 17% of superfans. Hidden Bands is designed to give superfans a way to continually interact with new music releases.

More than 45% of music fans say they want more than just songs from an artist. They want the backstory and artist interaction. Hidden Bands helps facilitate that interaction by giving superfans a gamified experience to unlock backstories and exclusive rewards in the app.

“Superfans, the early adopters, are crucial to launching a band’s popularity,” Bruce Pavitt, Founder of Sub Pop records, told Digital Music News. “Now Hidden Bands encourages these fans to learn about emerging artists by gamifying music discovery.” The Hidden Bands app is available in Canada and the United States, with more than 70,000 locations to discover.

Hidden Bands is a music discovery platform for people who want to find new music first. The company has been guided by advisors prominent in the AR Gaming, Music, and Geographic Information Systems spaces, including Steve Peters of Niantic, Bruce Pavitt of Sub Pop Records, Steven Myhill-Jones, former President of Latitude Geographics, and Alfie Williams of Universal Canada. The company is located in Victoria, British Columbia and is run by a team of dedicated musicians, engineers, and creative professionals.