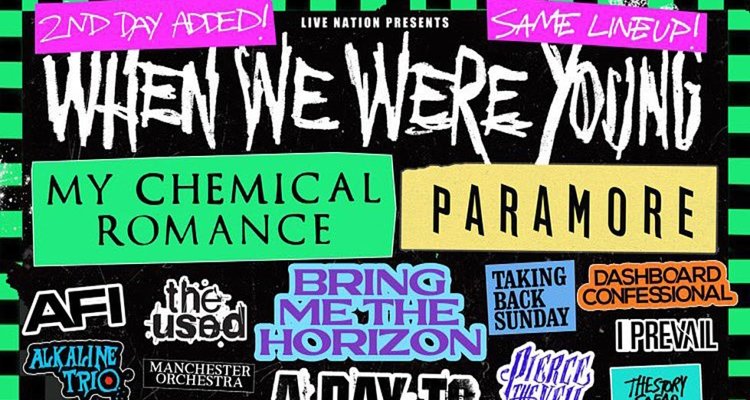 When We Were Young – the nostalgic Las Vegas punk rock festival – is adding a third date featuring the same lineup.

The festival will take place in October 2022 and be headlined by My Chemical Romance and Paramore, among other emo acts from the early 2000s. After the initial date sold out, organizers announced a second day at the Las Vegas Festival Grounds.

Update: When We Were Young promoter Live Nation has just announced that a third date has also been added. The three dates are: October 22nd, 23rd & 29th, 2022.

Over the weekend, Live Nation issued a statement regarding safety concerns following what happened at Astroworld. “The safety of fans, artists, and staff is thoroughly planned for among event organizers and in coordination with local authorities,” the statement reads. But some fans are expressing concerns about the When We Were Young festival being another flop – like the Fyre Festival.

🥀Second Show Added🥀
Due to the overwhelming demand, we have decided to add a second day. Same Lineup each day. pic.twitter.com/y0ua7lwI1B

There are 65 bands slated to play within the 13-hour timespan of the festival for each day. Live Nation also addressed those concerns. “Set times will vary with earlier bands having shorter sets and the headliners having the longest. There will be multiple stages of varying sizes placed around the festival grounds, with several bands performing at the same time. Full lineup details including set times and performances by stage will be released closer to the festival.”

The two-day festival is now sold out completely, though not everyone is happy with the lineup. “The commodification of emo nostalgia as we become adults with our own spending power has been so funny to watch and also kind of embarrassing,” one user wrote in response to the festival’s announcement.

How much do When We Were Young Festival tickets cost?

When We Were Young Festival Lineup