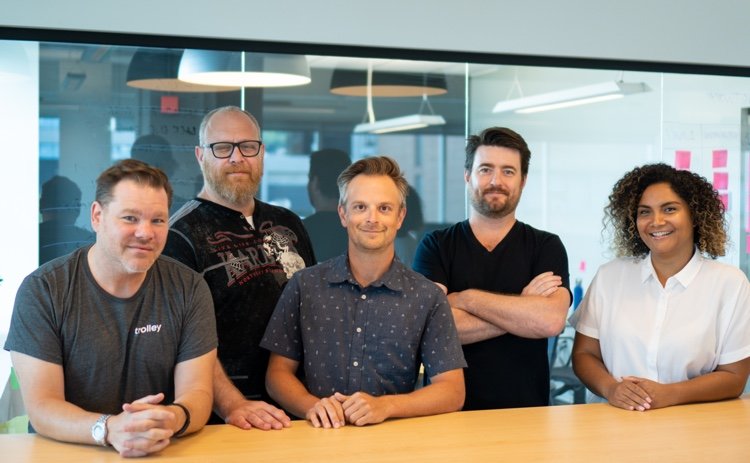 Between today’s many royalty streams and their distinct tax implications, music industry payments are more complex than ever. Now, with a new name and a multimillion-dollar Series A under its belt, customizable payout platform Trolley is looking to optimize the royalties space.

It’s been a breakneck year for Trolley – the fintech company formerly known as Payment Rails. Since late 2021, Trolley has doubled its workforce, changed its name, and secured a hefty Series A led by Pace Capital. In April, Trolley launched a feature called Invoices, billed as a “line-by-line payout categorization and consolidation tool.” By May, Trolley had announced a major payables contract with one of the biggest companies in the music industry — CD Baby. And last week, Trolley was named to Forbes’ Cloud 100 Rising Stars.

Finances are hardly the sexiest facet of the music industry, though fintech innovations like Trolley’s Invoices are game-changers nonetheless. Designed to simplify payments by enabling companies to group together multiple “line items” into a sole payout with multiple categorizations, Trolley indicated that the straightforward Invoices option can reduce transaction fees and, as every income category is taxed differently, make tax compliance easier.

“Business relationships are not black and white; the type of income an artist receives is nuanced based on what type of activity it’s associated with,” Trolley VP of Product Barnett Klane told Digital Music News. “Businesses have needed to either turn a blind eye or send segmented payouts, creating poor recipient experiences with less-than-accurate reporting or requiring the reconciling of many payouts per payday. Invoices offers the best of both worlds – a single payout per payday but segmented line items with details on how each part of that payout should be accounted for.”

The bigger picture is even more daunting. Once upon a time, the biggest labels and publishers sifted through thousands of line items with dedicated accounting teams. Now, in the streaming era, ‘thousands’ has quickly turned into ‘millions’ – or hundreds of millions – of line items. That is overwhelming nearly every sector of the music industry.

“Saying the music industry is complex is an understatement,” Trolley founder and CEO Tim Nixon told us. “When it comes to payments, it’s definitely more complex than other types of entertainment because we’re talking about myriad distribution channels.”

Digital Music News recently joined forces with Trolley to highlight just how complicated this space has become. The word ‘dizzying’ comes to mind, a trend that is forcing major companies to examine their current processes for payables and evaluate where they can fit in tech and automation. Nixon is leading the charge to fill that urgent need, with the type of zealotry that eludes most creative types.

“Music has always been a multi-channel medium, but it’s gotten even more complicated over the last decade,” Nixon said. “You still have physical and digital sales, and radio plays. You also now have dozens of streaming platforms, each with its own rates and royalty structures. And, on top of all this, there are TV, film, and now social sync royalties. A single piece of music can be earning royalties in so many places at the same time.”

Those license types are then mapped against varying license payout schedules, further deepening the complexity. “While it’s easy to talk about the music industry as a monolith, ‘music’ is a broad term and is widely varied in terms of payment processing,” Nixon continued.

“You have payers who pay regularly (bi-weekly or monthly), quarterly, bi-annually, and annually – all depending on the different types of royalties they’re paying. When we talk about payments, it’s an essential part of the business, and it’s also a point of inefficiency that can be optimized and streamlined in any organization needing to pay musicians.”

This streamlining, Nixon proceeded, will ultimately benefit artists as well as businesses. But as payables assume greater complexity, so do the tax implications. In a global industry, it isn’t just Uncle Sam demanding a cut.

“What spins off from payments, and is equally complex, is IRS compliance,” he said. “Artists are not like your standard freelance writer or marketplace seller because they can earn many categories of income: CD sales, streams, merchandise sales, ticket sales, and more. Each potentially comes with its own different tax implications.

“The end of the year for an accountant or controller in a music organization is a very stressful time. Compound that with the fact that not all artists are American and therefore as a foreign person, they could require tax withheld throughout the year and a completely different format for reporting — it’s exponentially complex.”

The potential applications of Trolley’s Invoices feature are particularly beneficial in the music industry given these numerous artist payments, according to the Trolley execs, who said that they developed their platform after discussions with industry professionals.

“In our conversations with those in the industry, we heard of limitations in existing solutions, for example, the need to make multiple payments to individuals to account for domestic and international royalties,” Klane relayed of Invoices’ music industry role.  “But as we obsessed on the recipient experience, we found that this was needless and something we could focus on fixing.”

Furthermore, Trolley higher-ups communicated that their multi-industry operations have equipped them with the experience and resources to handle company-specific integration challenges and concerns.

“There’s a segmented and constantly changing landscape of processes and tooling used across the industries we work with,” elaborated Klane. “Ultimately, we try to stay up to date with a mix of customer-focused, market, and competitive analyses that help us make decisions on where to focus our efforts.

“At this point we mostly see integration challenges fitting into one of three buckets: reconciliation, payout enqueuing, or data management. We’ll initially be focused on reconciliation, helping accounting teams keep track of the payouts within their ledger. From there we’ll expand to a slew of partners with a variety of workflows supported.”

Trolley’s skillset is now being put to work by distribution giant CD Baby, which previously announced that it had paid out a cumulative total of more than $1 billion to its community.

By enlisting Trolley to power payments for over 1.2 million artist users – and leveraging Invoices to consolidate a multitude of revenue streams into single payouts – CD Baby said that it was able to cut transaction costs by about 40 percent. Besides CD Baby and its subsidiary, Soundrop, other customers in the music space including sync library Crucial Music, Italy’s Musixmatch, and BeatStars are all taking steps to stay ahead of the curve in payments and taxation, Trolley stated.

Building upon the high-profile CD Baby deal and the associated experience, Trolley intends to expand Invoices during the remainder of 2022, with an emphasis on the inherently complicated puzzle presented by international tax compliance.

“A lot of times, a U.S. music company doesn’t think about foreign tax withholding – we’re talking W-8s and 1042s,” Nixon said. “As companies source more and more non-U.S. talent, they need to get a handle on this issue. For many of our customers, priority number one is getting all taxes (international and domestic) sorted ASAP.”

“We are going deeper to solve tax than anyone else in the industry,” added Klane, whose company can manage payments from north of 215 countries and in some 135 currencies. “We are taking full ownership in solving global tax compliance in relation to payouts.”

“From helping our customers gain compliance to navigating the constantly changing environment with new forms and changes in requirement, we are doubling down on our tax solution with the expansion of support for 1099-K and Europe’s DAC7 later this year.”

Longer term, by producing and updating payment (and payment-adjacent) solutions, Trolley will look to simplify the industry for companies and lay the groundwork for continued growth in both talent and revenue – especially as streaming becomes increasingly popular in developing markets.

“Artists can distribute their music far more directly to consumers today than they ever could. But alongside their freedom to distribute, tax-reporting and withholding rules still exist,” Nixon told DMN. “This can be a major sticking point for an intermediate like a streaming DSP. And there are a lot more of those intermediates today. They need to scale while remaining compliant, and it’s tech that’s going to have to step up to solve this.”

From a broader perspective, the creator economy’s explosive growth in recent years means that a large number of professionals, from all manner of different countries, are using their unique skills to earn a living over the internet.

For current and future members of this creator economy – and the international music industry – access to a capable financial infrastructure is therefore a must. Trolley said that its payment-optimization efforts, in addition to affording companies and DSPs savings and perks, ultimately benefit the very individuals who make excellent music as well as the talented individuals who will begin doing so down the line.

Trolley officially changed its industry-insider original title, Payment Rails, late last year, and the pivot – along with the mentioned multimillion-dollar raise – reflects the company’s widening role in the creator economy and the contemporary business landscape.

Since its 2015 founding, Trolley has evolved “from a mass-payout solution to a global payouts ecosystem,” Nixon explained, also noting that for clients, the business has become “a vehicle for them to grow their businesses.”

And at the intersection of efficiency, convenience, and accessibility, Trolley is ultimately striving to tear down prohibitive entry barriers through its offerings, Klane and Nixon told us.

“All of these businesses depend on their artists, and artists who are receiving regular and accurate payments are happy artists,” said Nixon. “From the artist point of view, it can seem a pretty simple one-to-one relationship. For the business paying them, it’s a one-to-many problem, and it’s easy for a streaming or licensing platform to get bogged down making tens of thousands of payments on a regular basis.

“At the end of the day, issues like compliance are barriers to entry,” he concluded. “By offering a tool that can help everyone stay compliant, it makes the industry more equitable to everyone involved.”