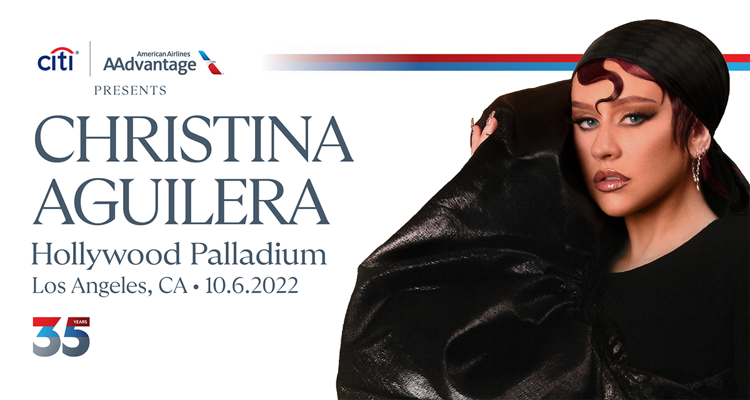 Citi and American Airlines are the corporate sponsors behind Christina Aguilera’s upcoming show at the Hollywood Palladium in Los Angeles — just make sure you’re carrying a Citi/AAdvantage Mastercard.

To celebrate the 35th anniversary of Citi and American Airlines’ partnership, Christina Aguilera will perform a concert exclusively for Citi and AAdvantage Mastercard members. The show will take place on Thursday, October 6, at the Hollywood Palladium in Los Angeles. Citi and AAdvantage cardmembers can purchase tickets using their card through Live Nation at Citi Entertainment’s website.

“It’s rare to have the opportunity to perform for my fans and connect with them in such an intimate setting,” says Christina Aguilera. “Celebrating Citi and American Airlines’ 35th year of partnership with this unique concert experience is extraordinarily special for me and the fans.”

The show will also be live streamed exclusively for Citi and AAdvantage cardmembers at no additional cost on the premium concert streaming platform Veeps. Members can watch the concert via veeps.com, the Veeps app on Apple TV, Android, iOS, and Roku.

Earlier this year, the Grammy award-winning artist celebrated the release of her ninth studio album, Aguilera. The album is her second full Spanish language release and draws upon the singer’s Ecuadorian heritage. Christina Aguilera recently wrapped her UK and European Summer Series concert tour, which promoted the album alongside her Billboard Hot 100 hits, “Genie in a Bottle,” “What a Girl Wants,” and many more.

Christina Aguilera has sold over 75 million records throughout her career, achieving five number one singles on the Billboard Hot 100 chart. She is the third female artist and the fourth overall to top the chart over three consecutive decades. Among her many accolades, Aguilera has won six Grammy awards, including one Latin Grammy award.