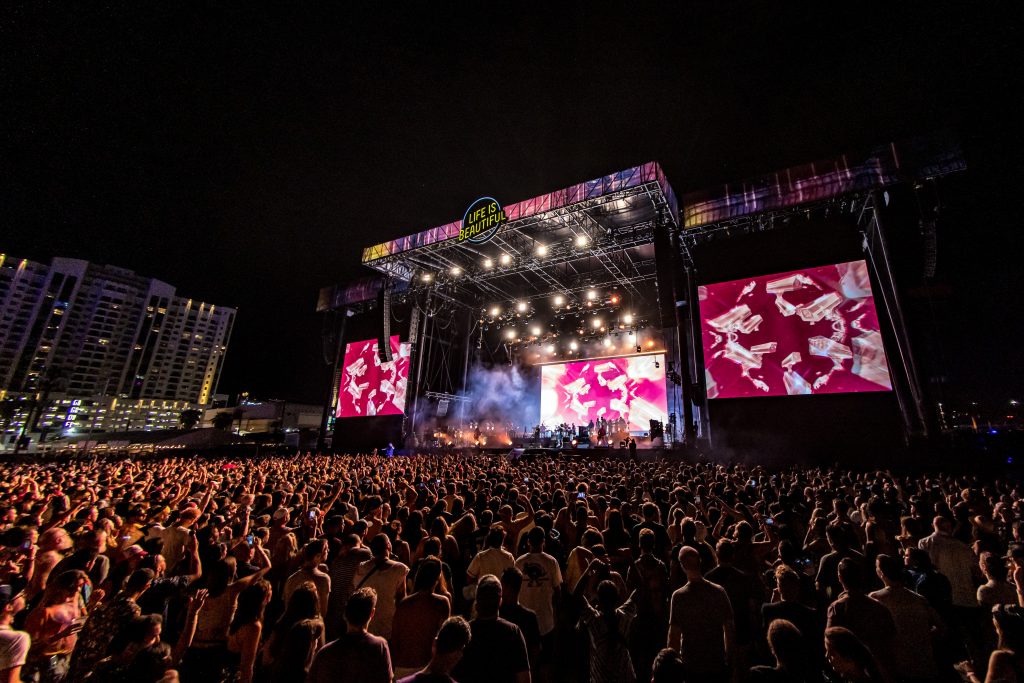 Life Is Beautiful Festival took over Downtown Las Vegas this past weekend on September 16th-18th. Over 170,000 festival goers converged to celebrate music, art, and more. Here’s a recap of the festival — and notes for festival organizers to consider.

Life Is Beautiful festival is an annual three-day music, art, food, and comedy event held every September in Downtown Las Vegas. This is the festival’s ninth year and takes place in the heart of downtown, taking over 18 blocks around Fremont.

Life Is Beautiful’s mission is “to create a holistic experience which aids in positive community transformation and individual empowerment by collectivizing and inspiring through shared experiences driven by art and culture.” Since the festival was first held in 2013, it has contributed “over $350M of economic impact and cultural capital to the area.”

The festival was also made accessible to those who weren’t able to attend in person. Life Is Beautiful teamed up with Twitch and Amazon Prime to provide a livestream throughout the weekend for anyone to join the party.

There were a total of 7 stages at the festival: Downtown Stage, Huntridge Stage, Bacardi Stage, Fremont Stage, Rising Stars Stage, The Kicker Comedy Stage, and The Toyota Music Den.

Two stages were a bit more unique than the others holding the lineup of music acts. The Kicker Comedy Stage was indoor and hosted all comedy acts. The Rising Stars stage was held by Sessions to support and host rising music artists.

Even with several stages, it wasn’t a hike to each stage. The space that was used for the festival grounds felt intentional, with each attraction leaving no overly empty areas.

Getting into the festival was a seamless process starting with a short line to bag check. Once security had gone through bags, there was one more layer of security involving metal detectors. This additional layer of security is essential to note and has been implemented into larger festivals like Coachella this year.

I believe this is an extra security measure that all festival organizers should consider, no matter how big or small your event will be.

After successfully going through security, attendees scanned their wristbands and received a green light into the festival grounds.

Stalter’s stand-up set consisted of similar role-playing she has done on her Instagram live. Instead of interacting with the viewers and commenters on her Instagram, she was able to curate and interact with the live audience — elevating the humor to a different level. 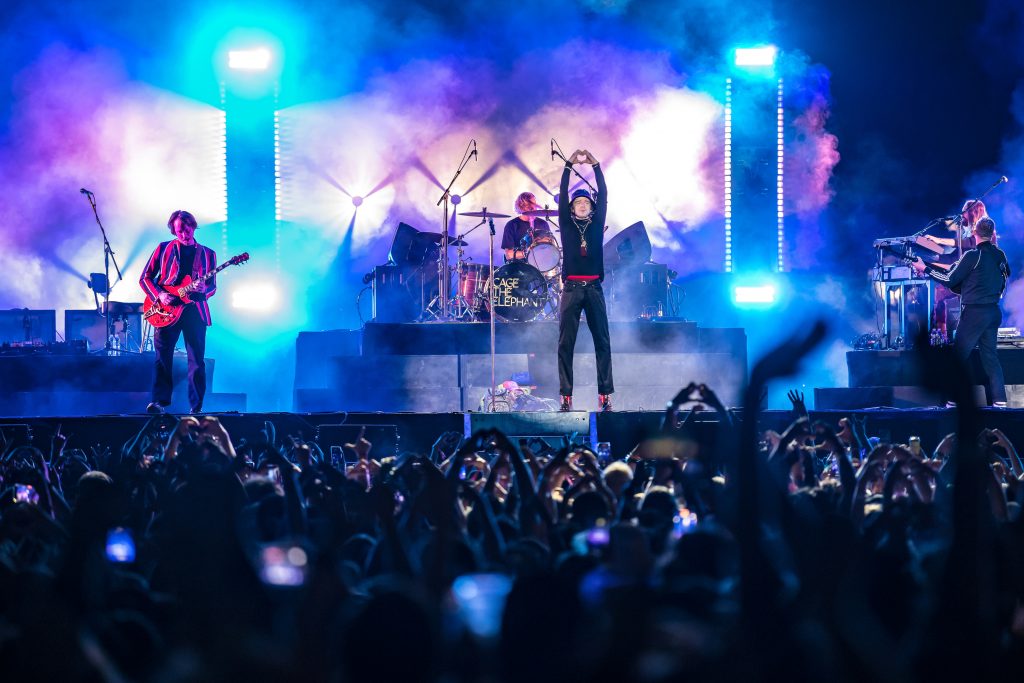 During the performance, there was a short drone show in the sky. This forced the group to restart their song, though this only hyped the crowd more for the second round.

Charli XCX’s performance was stunning to experience live, as the show’s production was thoroughly encapsulating. The choreography from Charli and her backup dancers made the performance feel like more than just a festival set. It felt like we were at one of her solo tour stops rather than a whole festival.

After seeing a performance from T-Pain, I was left with one question. Why is T-Pain NOT headlining at more festivals? His entire set was full of his most popular hits, a discography of all-around bangers. T-Pain was replacing Migos, and his outstanding set validated that he was a good choice for a replacement act. It was clear from the crowd’s excitement that T-Pain went above and beyond to give a legendary performance.

As a part of the festival’s “Feed Our Community” event, Life Is Beautiful from the festival to a Three-Square distributing 300 meals to people in need.

This EDM duo brought all the energy to the Fremont stage. From their original tracks to remixes of trending tracks, there was no stiff body in the crowd. 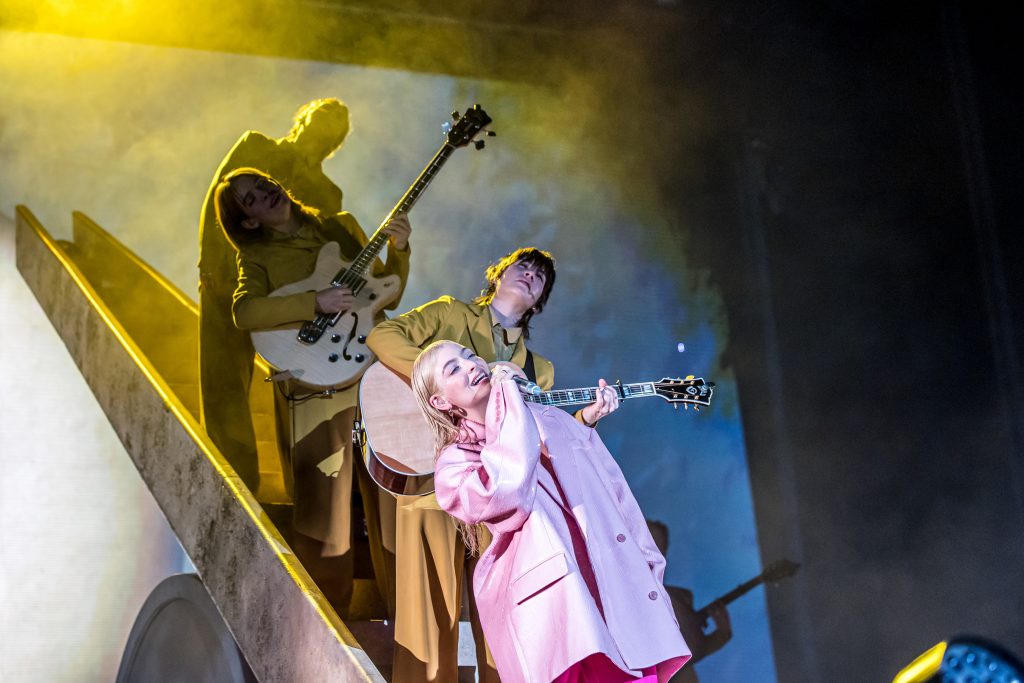 As expected, Lorde gave the crowd a total production and felt very intentional from the first song to the last song showcasing a journey through her work. She shared personal experiences and stories that stemmed as inspiration for some of the songs performed, making the performance much more intimate.

Kygo’s set was one not to miss as he brought out Gryffin, another weekend headliner, to play guitar for the song they had recently released together, “Woke Up In Love.” 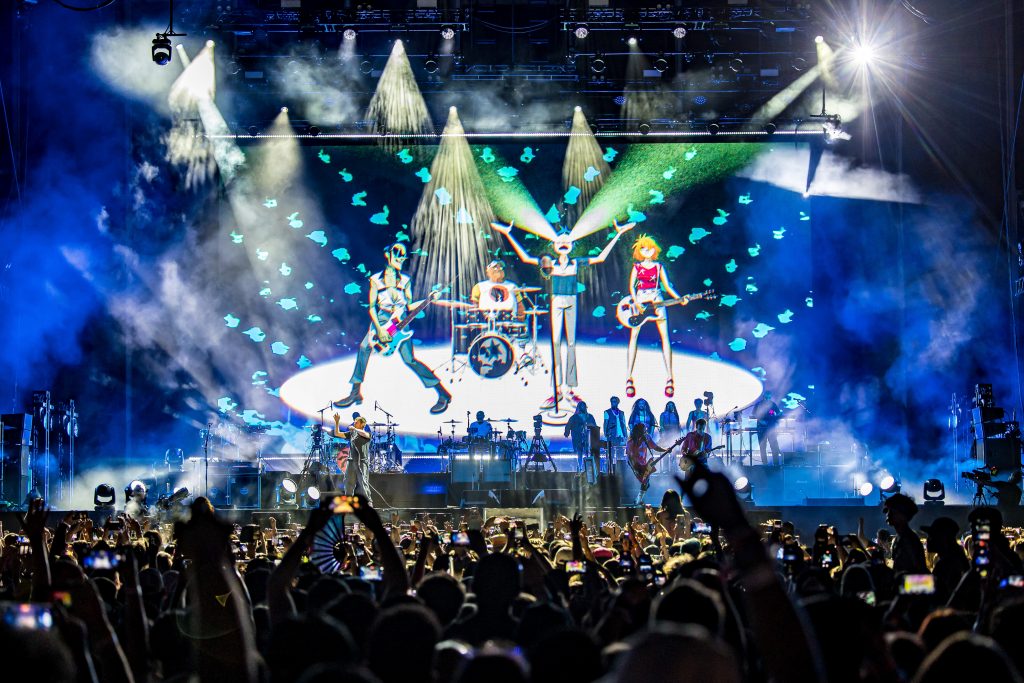 It was clear that the crowd had anticipated this set the whole day. Like many other performers throughout the weekend, the lead singer of Gorillaz, Damon Albarn, went down to interact with the crowd and sing alongside those in the audience. Throughout the show, Gorillaz had its animated characters in the background with mesmerizing animation videos in sync with the live music.

It was exciting to experience an Emmit Fenn set live. Unfortunately, we did not experience a full set as there were some technical difficulties at the beginning of the show, but that did not take away from the energy of the performance. 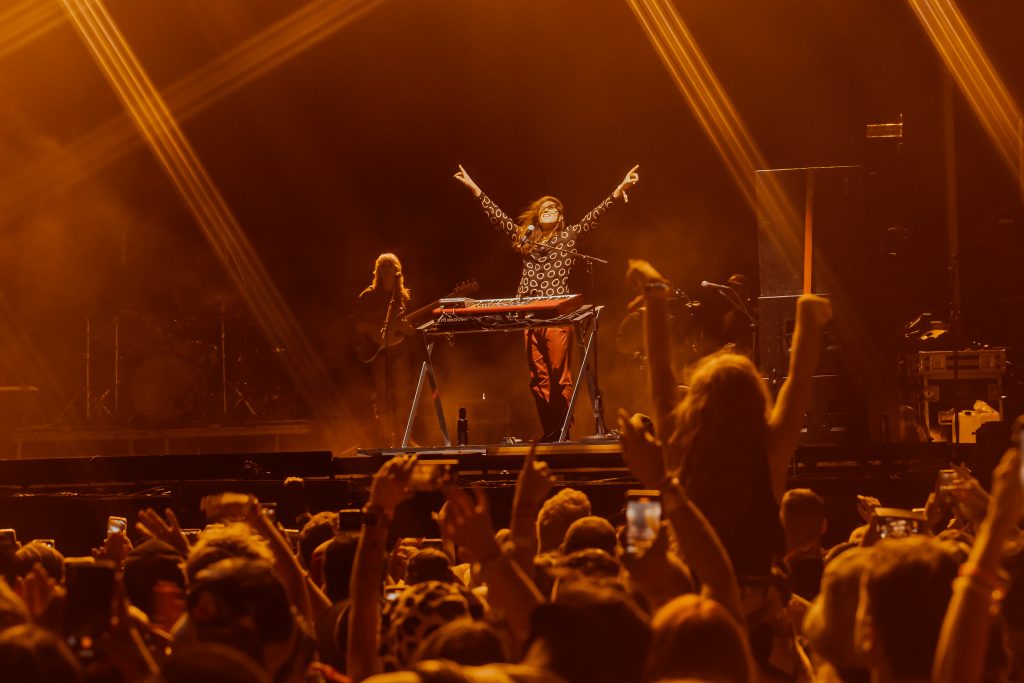 This performance was electrifying. The crowd knew almost every lyric to every song. The magic was in the air from Big Wild hitting the highest of high notes with the wind flowing through his hair. 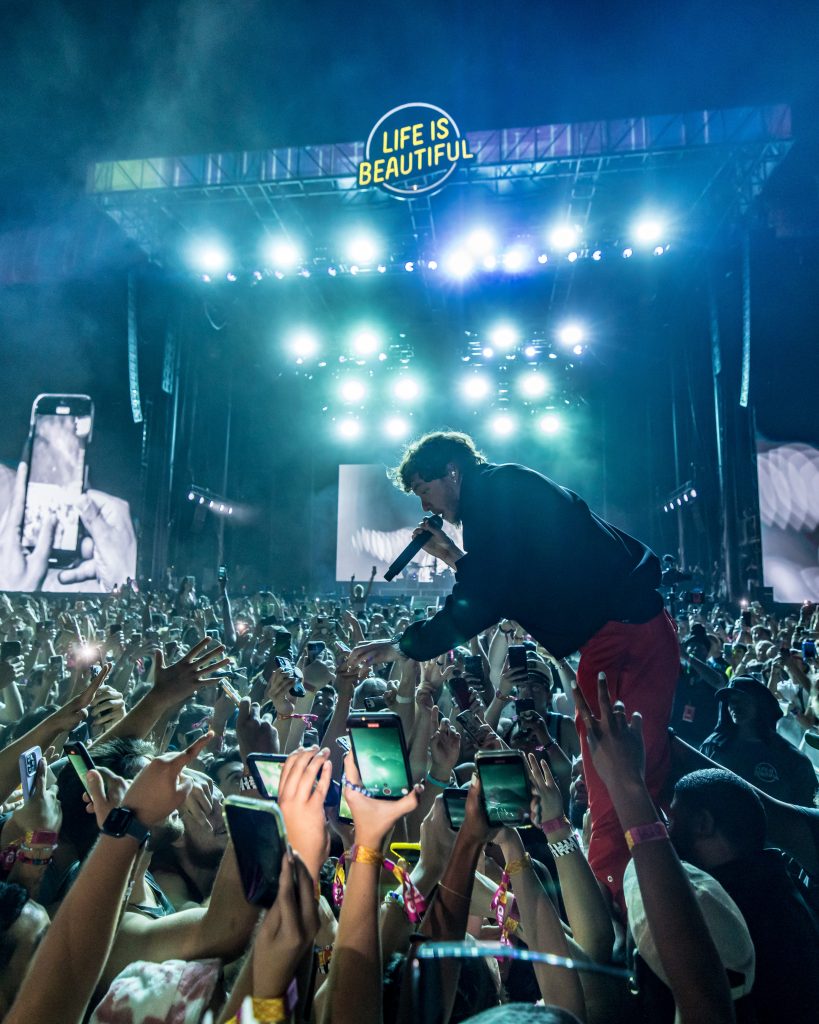 Being at this set felt like most festival attendees were in the crowd. Harlow performed his biggest tracks off his albums, along with his feature in Lil Nas X’s “Industry Baby.”

This performance was the perfect end to the festival weekend. Not only did we hear Harris’s newer tracks live with features, but we were taken back to tracks like “Slide” and his solo track “Feel So Close.”

Here are highlights of the overall festival experience and notable features for event organizers.

For those attending the event, there was an app with the full lineup schedule and an interactive map utilizing Google maps. Since this event was held in the middle of the downtown streets, it was extremely useful to have an interactive Google map highlighting any entrances, emergency exits, all the food vendors, stages, and anything that you would need to locate. Most festival event apps only have an image of the animated map.

Additionally, it is important to highlight that for some of the food vendors you could view the menus in-app rather than having to walk around the whole festival to check out all the different menus. It might seem like a minor feature, but this may explain why foot traffic was fairly minimal throughout the weekend.

These in-app features should be implemented by more festivals offering an app.

Aside from the app, you could also text a designated phone number questions about the festival and find out about any secret sets or guest appearances happening each day.

Walking throughout the festival, various art murals and installations were on the building walls and featured throughout the festival grounds. Not only was this showcasing work from local artists, but they were also great photo opportunities that would echo and expand the reach of exposure of the art at the festival. The art was unique to the individual artists and to Life Is Beautiful. 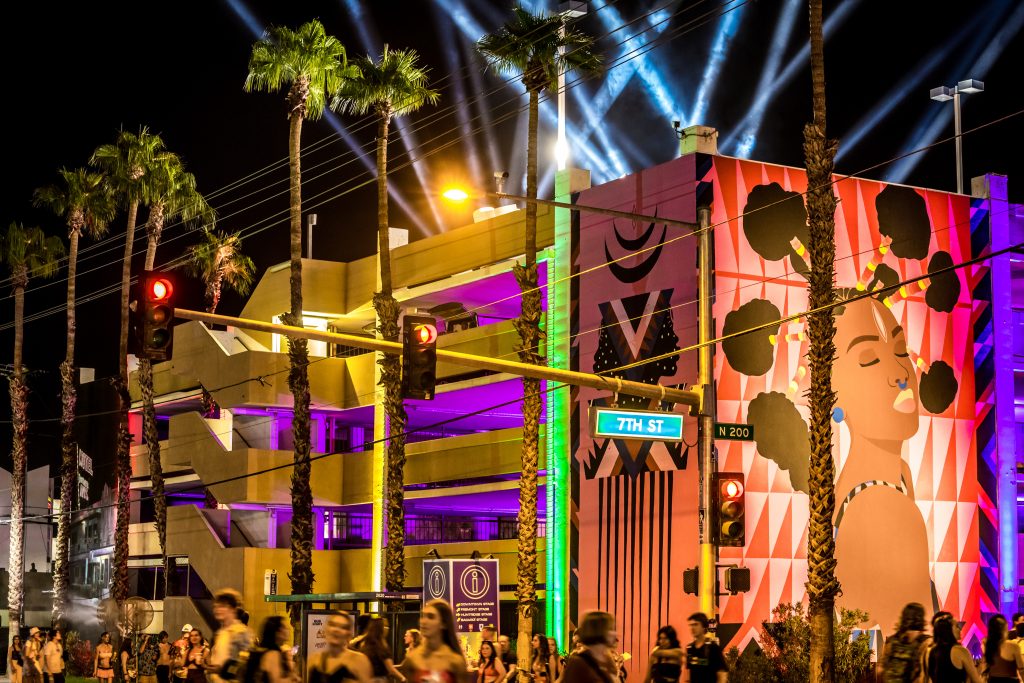 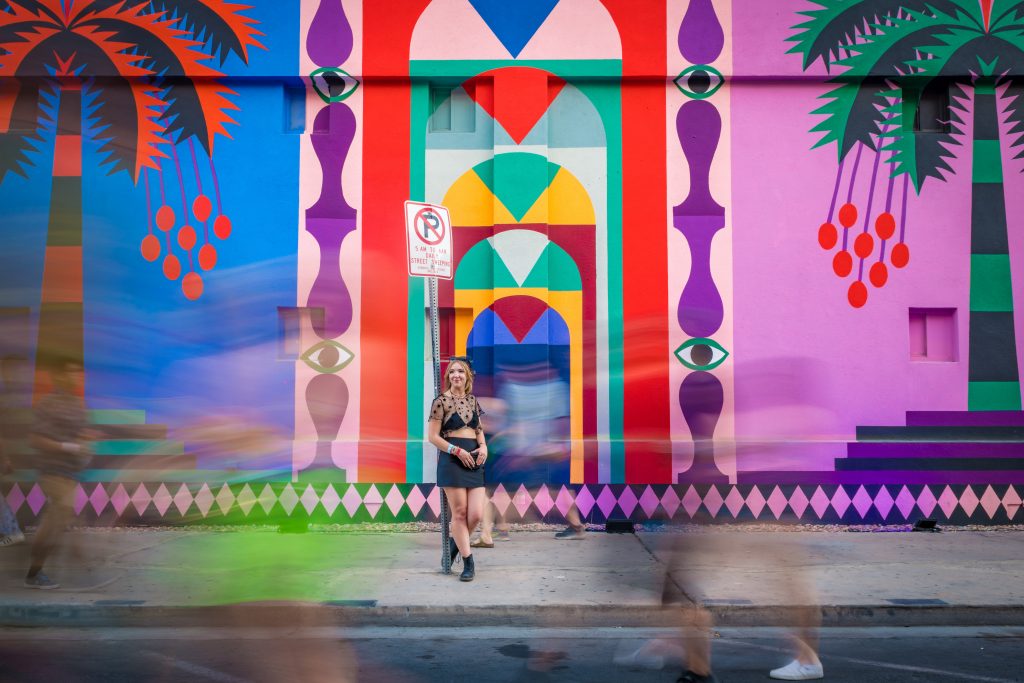 It was made clear that the festival truly succeeded in accommodating the attendees. Festival goers who attended with a general admission ticket had multiple opportunities to win an upgrade to VIP throughout the weekend and other prizes like a meet-and-greet with Coi Leray. This was made possible with either brand activations on-site or participating in the livestream.

They also provided many generous souvenirs such as a commemorative Life Is Beautiful bandanna and prizes given away at activations.

It is rare these days that a festival is generous to ensure that everyone can go home with something dedicated to the event without paying for the souvenir. Numerous times walking throughout the festival, I heard others discussing how awesome it was that there were a bunch of free keepsakes. It could even be the smallest trinkets; attendees appreciate the thought.

A unique and fun downtime experience was being able to wait in line and play Mario kart with other attendees.

Overall, this festival was one of the smoothest experiences in terms of getting to the festival, entering the festival, navigating the grounds, and exiting each night. The foot traffic was fairly light considering there were 170,000 attendees. The sponsorships and brand activations blended well with the event.

T-Pain, along with several other acts, were in replacement of headliners on the original lineup. The replacements seemed to have aligned well with the audience of those who had been replaced. Artists sometimes drop out at the last minute, and festival organizers need to consider these uncertainties and prepare to accommodate a replacement act or experience accordingly. Life Is Beautiful succeeded in doing this.

The majority of the stages had a great sound and setup. One exception was the largest stage, The Downtown Stage, which appeared to be experiencing audio issues. At times this stage either sounded too loud to where the instrument sounds would blend into a muffling noise. This issue occurred more during the day than at nighttime performances.

The Downtown Stage seemed to be the only stage with an American Sign Language interpreter. It would be great to see the accessibility at multiple stages. This is something that all festivals should continue to include.

Next year will be Life Is Beautiful’s 10-year anniversary. With this special year, super fans have already sold out the pre-sale tickets for 2023. Despite the sellout, there’s an opportunity to RSVP for next year and to be notified when tickets will go on sale again.