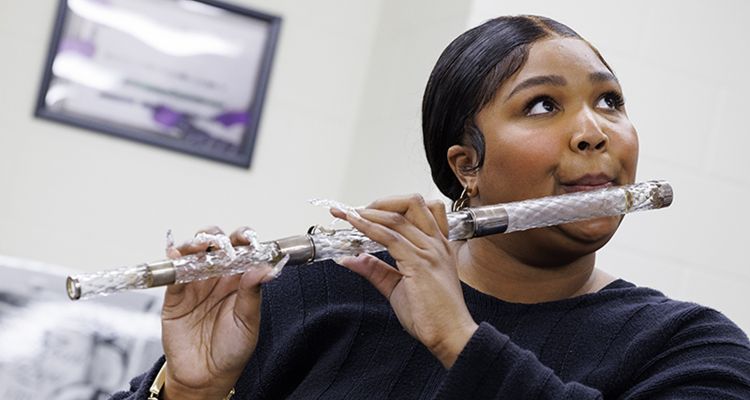 Lizzo played a crystal flute once belonging to US President James Madison in a Washington D.C. concert.

The singer is a classically trained flutist and shared her excitement with the crowd when showing off the instrument at Capitol One Arena in Washington. The Library of Congress loaned the artifact to the singer, with Capitol Police helping to escort the flute to her concert.

Fans cheered as Lizzo played a few notes on the flute and said, “I just twerked and played James Madison’s crystal flute from the 1800s! We just made history tonight!” she told her fans. “Thank you to the Library of Congress for preserving our history and making history fricking cool,” she adds.

In a tweet after the event, Lizzo shared more about the artifact. “Nobody had ever heard this famous crystal flute before. Now you have. I’m the first and only person to ever play this presidential 200-year-old crystal flute,” Lizzo tweeted. Carla Hayden, the Librarian of Congress, invited the singer to view the library’s flute collection–the largest collection of flutes in the world.

The crystal flute is about one of 1,700 flutes in the Library of Congress’s massive collection. It was made for President James Madison by Claude Laurent. It was rescued from the White House by Dolley Madison in April 1814. When Lizzo showed up to the Library on Friday, the Music Division staff gave her the highlights.

Claude Laurent was a French craftsman who took an interest in flutes as a pastime. He patented a leaded glass flute in 1806, a novelty at the time. Most flutes were made of wood or ivory, but the glass flute held its tone better during changes in temperature or humidity.

Glass flutes were popular for decades, but Laurent was alone in making them for the world. Once flutes began being made of metal in the mid-19th century, the glass flute disappeared. Only 185 of his glass flutes are known to survive, while his crystal flutes are even rarer.