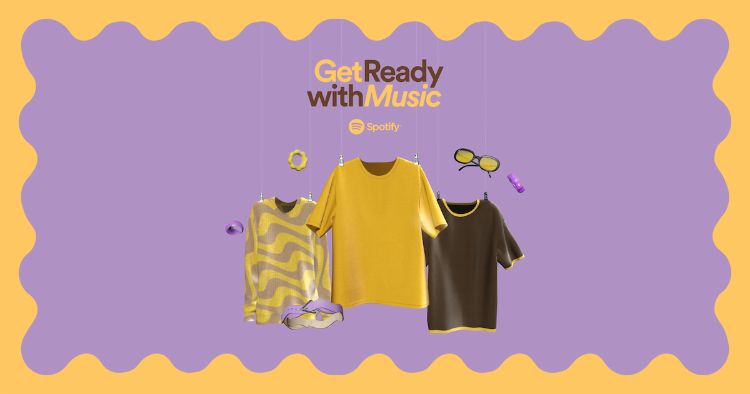 Spotify has launched an interactive — and data-grabbing — in-app playlisting feature known as “GetReadyWithMusic.”

When users are getting ready to go somewhere, the app will create a customized music playlist that captures the mood conveyed by the user’s fashion choices and intended destination.

For example, the app would likely play lively, energetic dance tunes for users headed to the gym to work out. In contrast, it might choose some lo-fi beats for users who have dressed up in business attire and are getting ready for a productive day at work. As a finishing touch, users have the option to take and upload pictures of their outfits to create customized cover art for each playlist.

Spotify then stores all of the GetReadyWithMusic playlists in a virtual space known as a “Music Closet,” where they can be retrieved for replaying and sharing with friends.

The feature is currently available in 13 different languages and 37 geographic locations, per Spotify.

To get the word out, Spotify has enlisted the help of social media influencers from around the world. In the United States, they chose two prominent TikTok influencers — sisters Dixie and Charli D’Amelio — to be their brand voices.

The two social media stars have chosen multiple eye-catching outfits to wear in the GetReadyWithMusic promotions. Their fashion choices resulted in unique playlists being shared with their followers and fans.

The sisters spoke enthusiastically about their experience with the new GetReadyWithMusic feature. They told observers that they loved dressing up and making different playlists for each look while listening to amazing music.

GetReadyWithMusic capitalizes on the sudden recent surge in popularity of the “GRWM” trend on TikTok, Youtube, and other social media channels.

The hashtag #GRWM, also known as “Get Ready With Me,” is typically used to label videos depicting the morning routines of various celebrities, influencers, and ordinary people. These videos tend to focus on things like skincare routines, hairstyles, makeup application, getting dressed, and breakfast preparation.

Indeed, “Get Ready With Me” is not a brand-new phenomenon. It started on social media years ago. The craze gained steam during the pandemic, with many people feeling isolated and enjoying the feeling of connection that the videos evoked.

The GRWM trend hasn’t faded in COVID-19’s aftermath; in fact, it has recently surged higher in popularity. When we checked stats as of October 14th, 2022, videos posted using the “GRWM” hashtag on TikTok had accumulated a whopping 45 billion views.

Whether or not Spotify’s users are creating GRWM videos of their own, the “GetReadyWithMusic” feature empowers them with an easy way to take part in this trend. The team at Spotify has demonstrated that #GRWM isn’t just a beauty and lifestyle phenomenon, but rather something carrying widespread appeal across different verticals.