How to Build a Fanbase That Can Break Ticketmaster 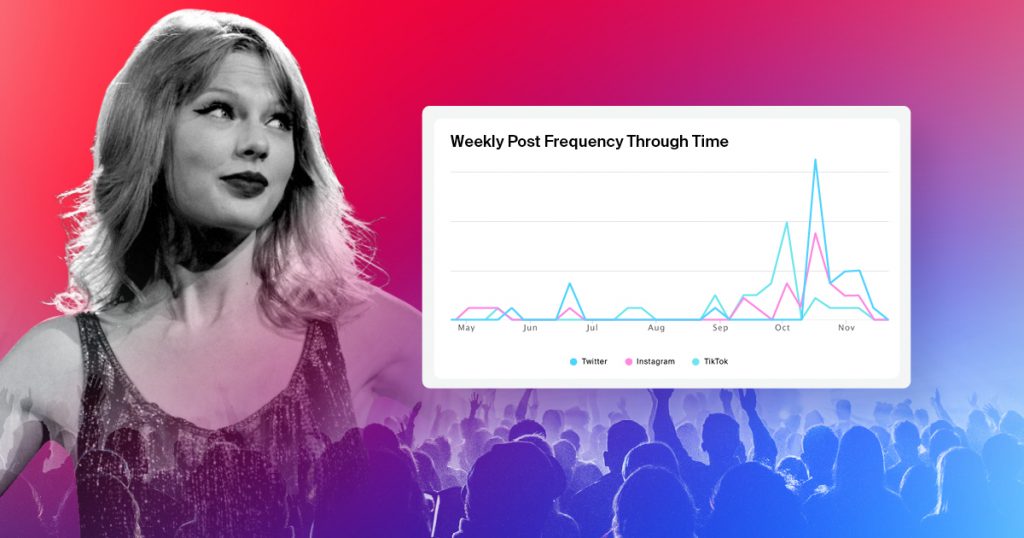 The following comes from Viberate, a company DMN is proud to be partnering with.

The issues that accompany breaking the world’s largest ticket service provider aren’t something any artist strives for. However, creating a demand that big means that 1) you have masses of fans and 2) they REALLY want to see your show. This is certainly the case with Taylor Swift’s audience, which is eager to see her on tour after five long years and four new albums plus re-recordings.

In this case study, we won’t investigate the ins and out of the tour ticket sales debacle. Instead, we’ll take a couple of steps back and look into the numbers behind Swift’s fan-focused marketing strategy with Viberate’s music data analytics.

We’ll analyze her roll-out strategy for her latest album “Midnights”, how it translated into streaming numbers, and how her “The Eras” tour announcement ultimately crashed Ticketmaster. We’ll also break down the audience that’s been fueling the demand.

1) Taylor Swift as a marketing mastermind

If there’s one artist who understands how an immersive marketing strategy works, it’s Taylor Swift.

With an army of fans ready to decode every clue or Easter egg she provides (and she provides plenty), Swift generates an immense amount of buzz. “It’s really about turning new music into an event for my fans and trying to entertain them in playful, mischievous, clever ways. As long as they still find it fun and exciting, I’ll keep doing it,” she told the Washington Post about engaging her fans.

She does say she’s “only cryptic and Machiavellian ’cause [she] cares”.

1.1 The demographics: Who’s a Swiftie?

Most of Swift’s fans (41%) are in the 18- to 24-year-old Gen Z group. 78% are in the larger 18–34 age group. Below we can also see the age and gender breakdown of her fanbase. Overall, most of Swift’s social media following is female (61.5%). Interestingly, the older the fanbase is, the higher the percentage of male followers (it’s equal in the 35–44 age group). 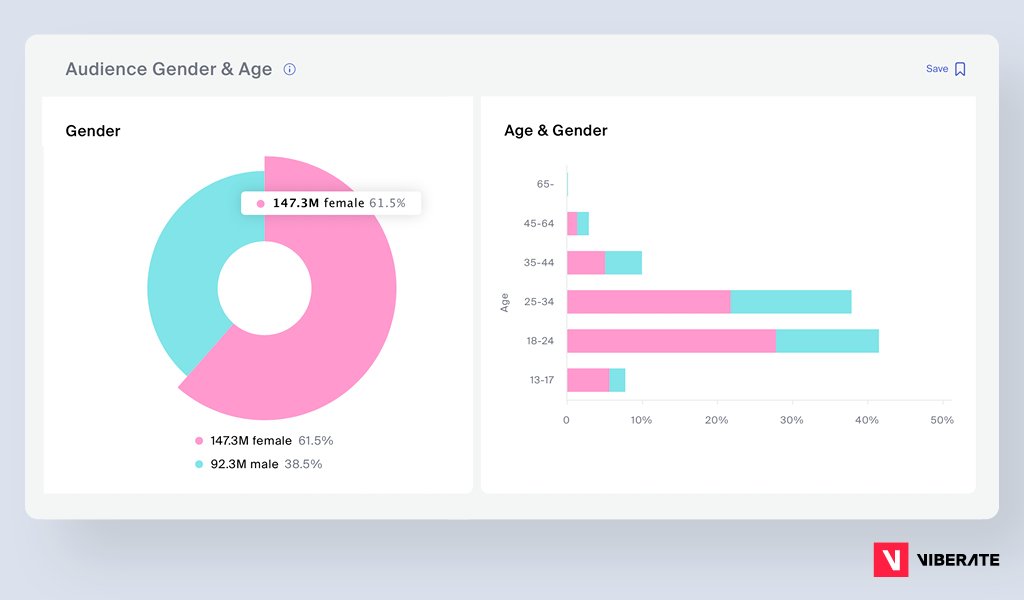 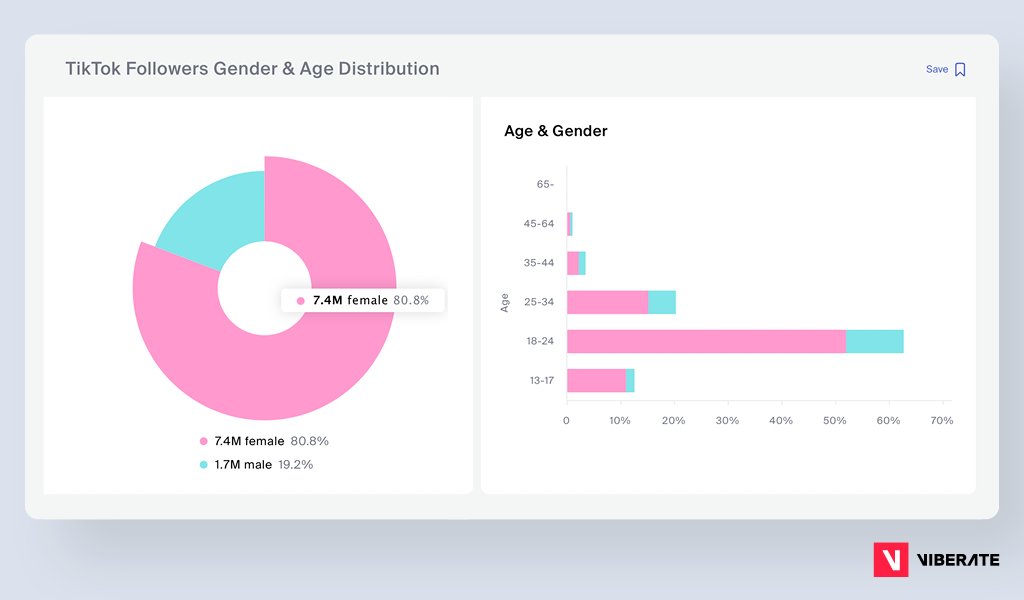 1.2 How engaged is her fanbase? 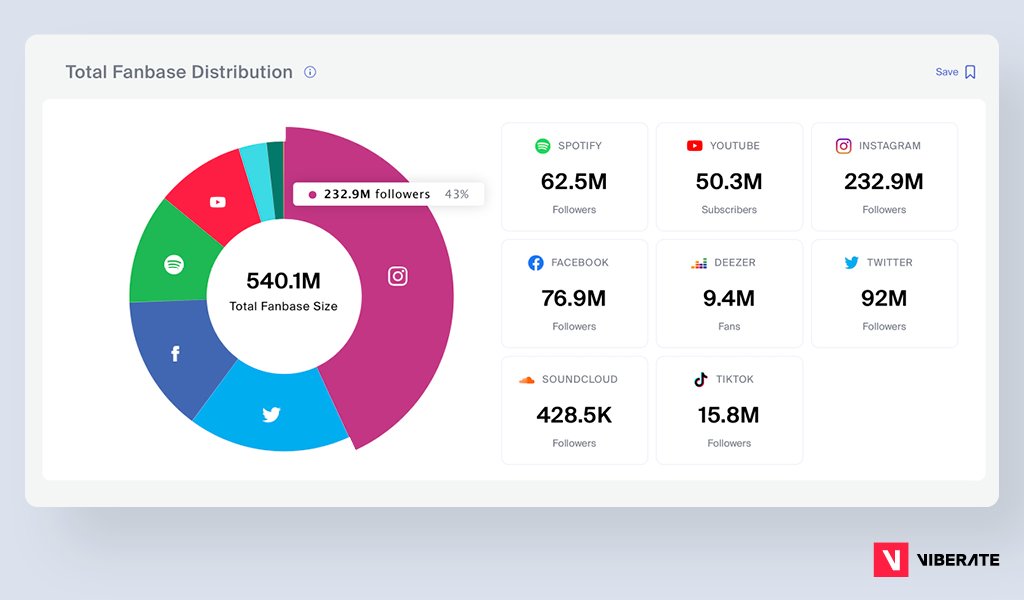 Below is a yearly comparison of Swift’s fanbase size and engagement in absolute numbers (combining social media and music channels). As she’s a well-established superstar, it’s not uncommon for the overall engagement line to be below the fanbase size – she’s built a huge fanbase through the years. We can see an engagement spike in August, when she announced the “Midnights“ album at the VMAs, and a massive peak in October, when she started dropping hints and teasing the album on social media. 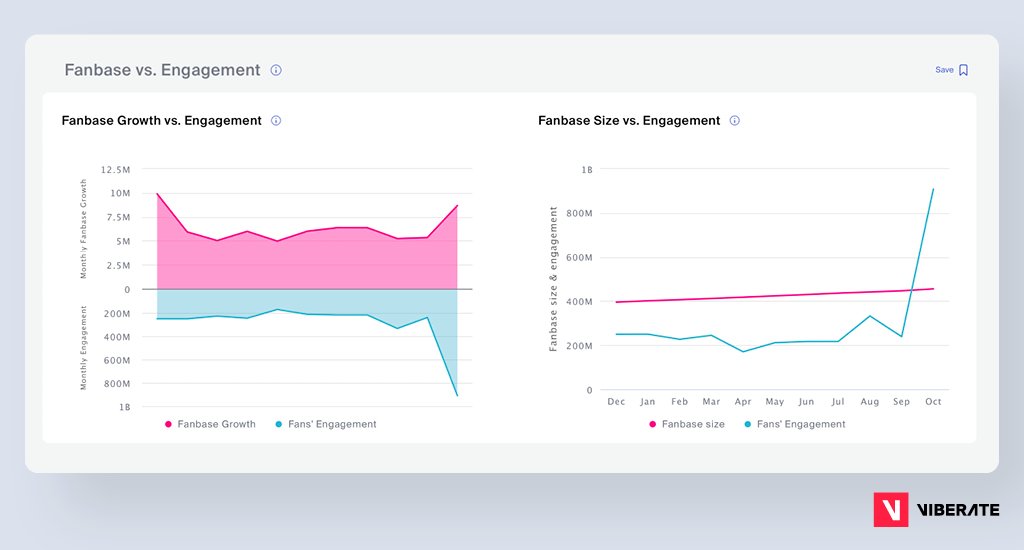 Let’s look into the music marketing masterclass of Taylor Swift to see how she achieved that. To follow along, you can register for Viberate here.

1.3 Setting the stage: #Swifttok or how Taylor Swift embraced TikTok

Taylor Swift is known for her fan-focused strategy, be it dropping clues, special merch, secret sessions with pre-release concerts (at her house!), and even #Taylurking her fans online. This all helps build a strong bond that’s the backbone of her campaigns.

Here’s one background factor that helped change that. After not being able to buy her masters, Swift decided to re-record her first six albums, much to the approval of her fanbase. The genius of it is that it not only energized her existing fanbase, it also introduced her work to new fans. She released her versions of the “Fearless” and “Red” albums during the Covid lockdown in 2021, when the public was hungry for new music. Her albums “folklore” and “evermore”, released in 2020, were also a sign of the times, encapsulating the mood with their minimal indie folk sound.

Ahead of “Midnights”, a couple of TikTok trends like “Love Story” and “Wildest Dreams” also helped set the stage. Even though Swift isn’t a Gen Zer, she’s present where her audience is engaged the most – primarily TikTok – with imagery that has a DIY, organic feel to it. Cue the birth of #Swifttok. See the rise of her TikTok fanbase below. 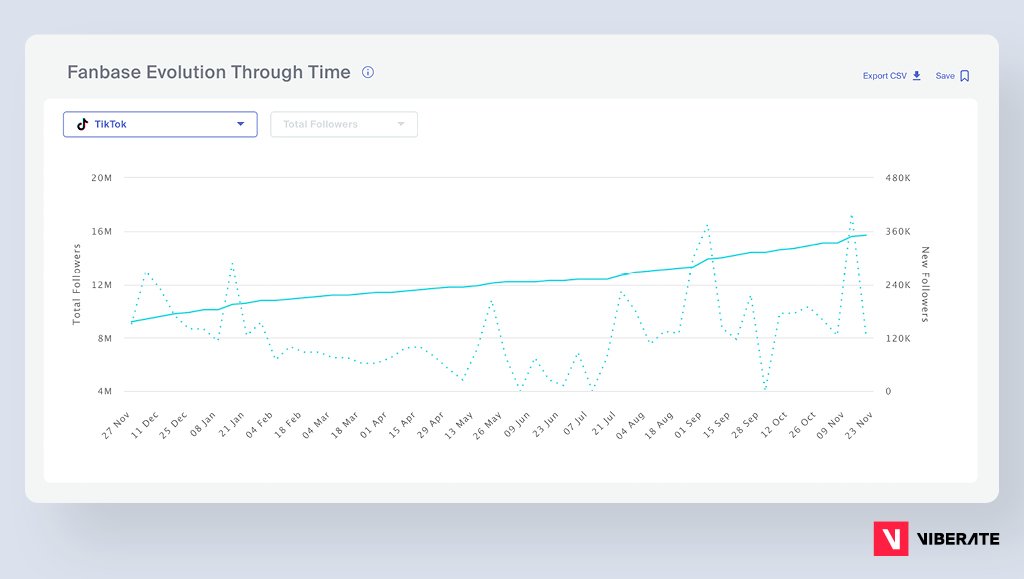 1.4 The teaser phase: Building the anticipation

“Midnights” is a concept album with a traditional roll-out, but it didn’t include a single or reveal any music teasers before its release (same as with “folklore” and “evermore”). Instead, Swift relied on fan-focused social media teasers. She revealed her tracklist via bingo balls on 13 TikTok episodes of “Midnights Mayhem With Me”, starting one month before the album release. 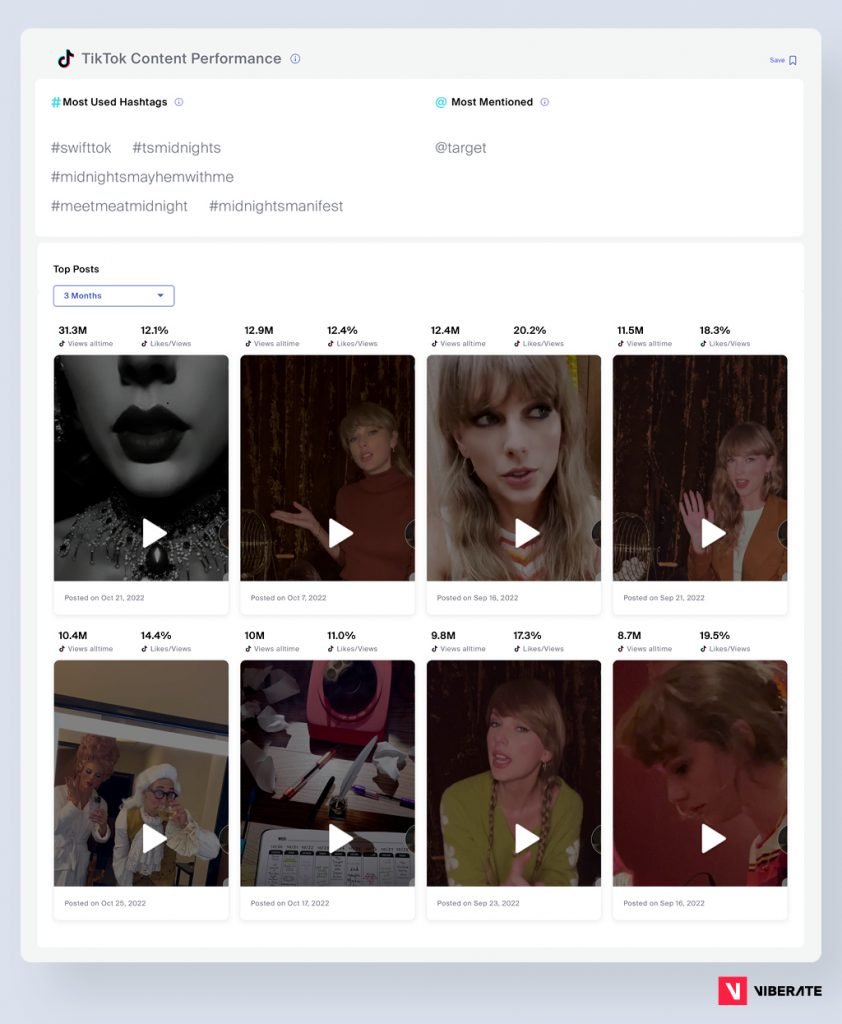 This way, she kept her fans constantly on their toes, transforming them into a community of internet sleuths (with their own influencers), re-listening to her previous albums to decode clues and taking apart every theory.

Swift combined her social media strategy with other channels, keeping the content unique to each. Here’s her post frequency: 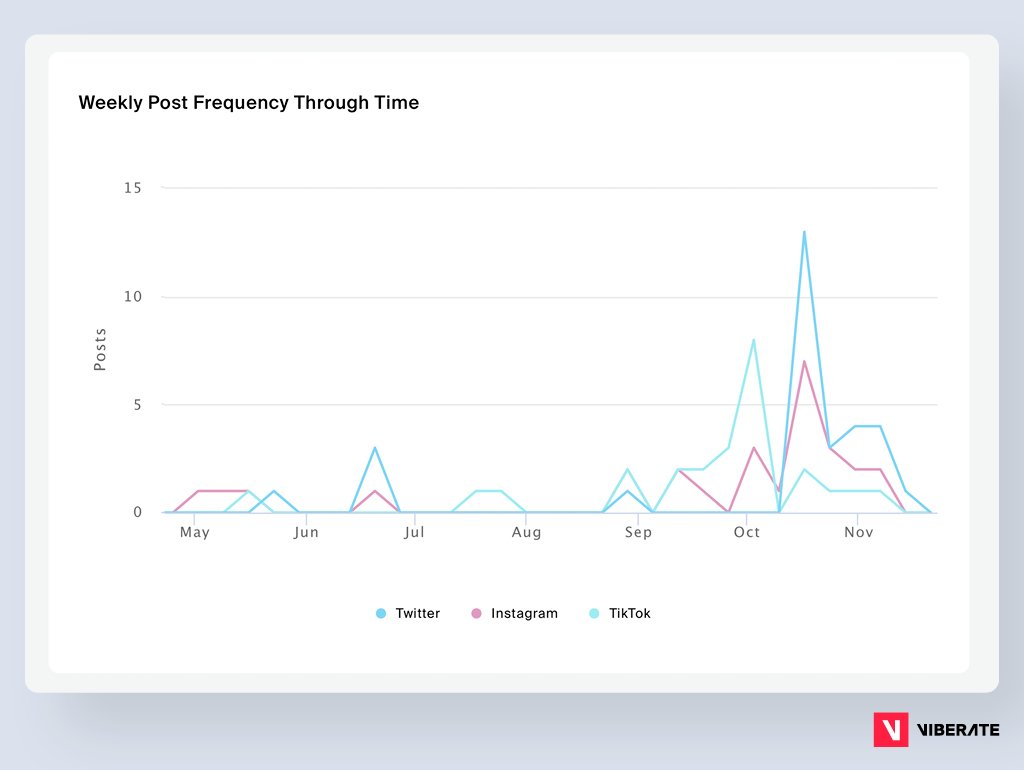 “Midnights”, which was released at midnight on Friday, October 21, 2022, set the record for the most streamed album in a single day in Spotify history.

Swift excels in keeping the ball rolling. Three hours later, she released “Midnights (3am Edition)” with seven additional songs, giving an additional boost to her streaming numbers. Then, she announced a Target-exclusive CD version, followed by remixes of the song “Anti-Hero”, and so on.

This is in line with her previous strategy of prolonging her work’s life cycle, for example the “deluxe version” and “the long pond studio sessions” of the “folklore” album, “From the Vault” additions to her re-recorded albums, and genre and mood variations of songs, e.g. “All Too Well (Sad Girl Autumn Version)” and the “dancing, lonely and moonlit witch version” of “willow”. That’s a hefty number of versions right there.

Additionally, she boosted her vinyl sales by offering four variants of “Midnights” that form a working clock with the help of an additional purchase from her site.

Alongside came the music videos for “Anti-Hero” and “Bejeweled”, with especially the latter being a real Easter egg extravaganza, created for her fans to go to town. For example, the 13 floors in the elevator (the singer’s lucky number) each correspond to an album in her discography.

Each of these steps kept the momentum going. Below, you can see that the boost in monthly listeners was the biggest compared to Swift’s previous album releases. In the month following the “Midnights” release, she gained 26.4M monthly listeners (she gained 16M listeners after “folklore”, 14.7M after “evermore” and 16.6M after “Red (Taylor’s Version)”). 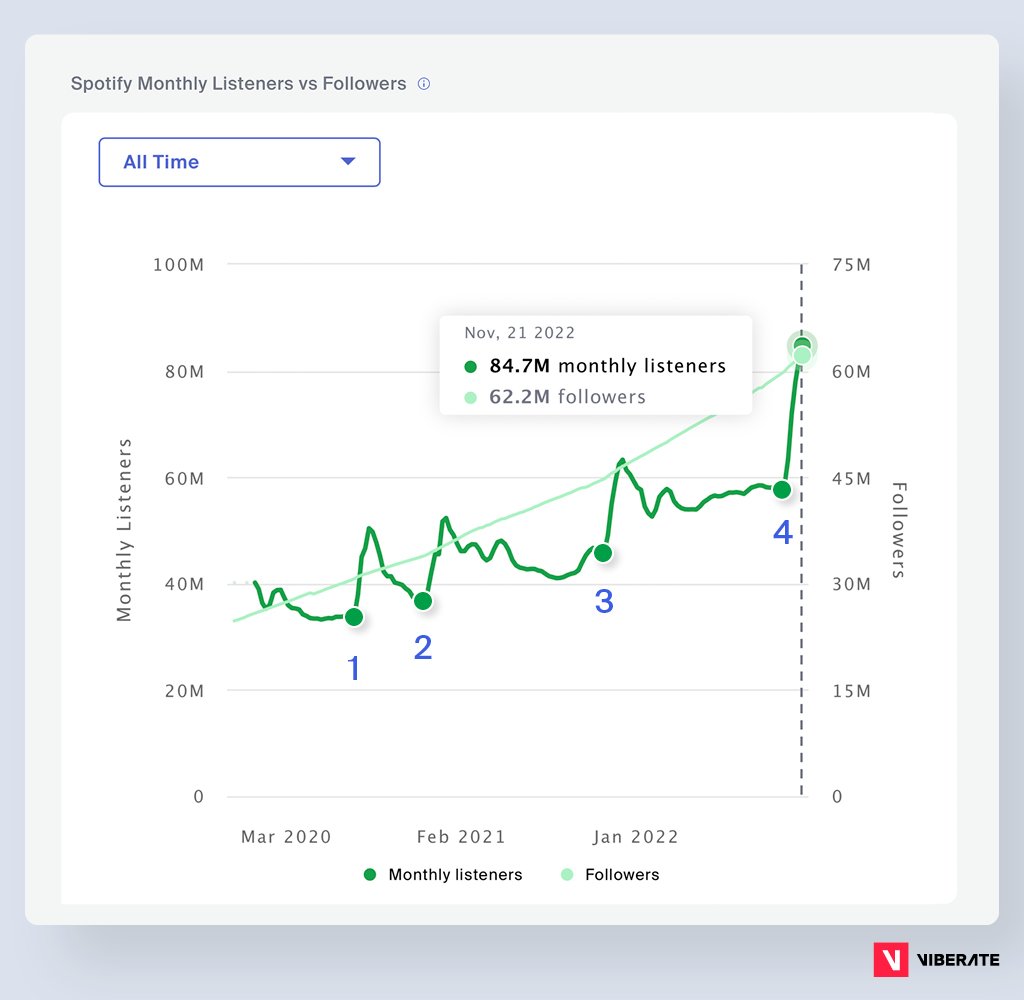 Since the album release on October 21, the “Midnights” tracks have gotten a total of more than 2.1B streams. Swift’s most streamed track in the past month was “Anti-Hero” with 282M streams, followed by “Lavender Haze” and “Midnight Rain”. 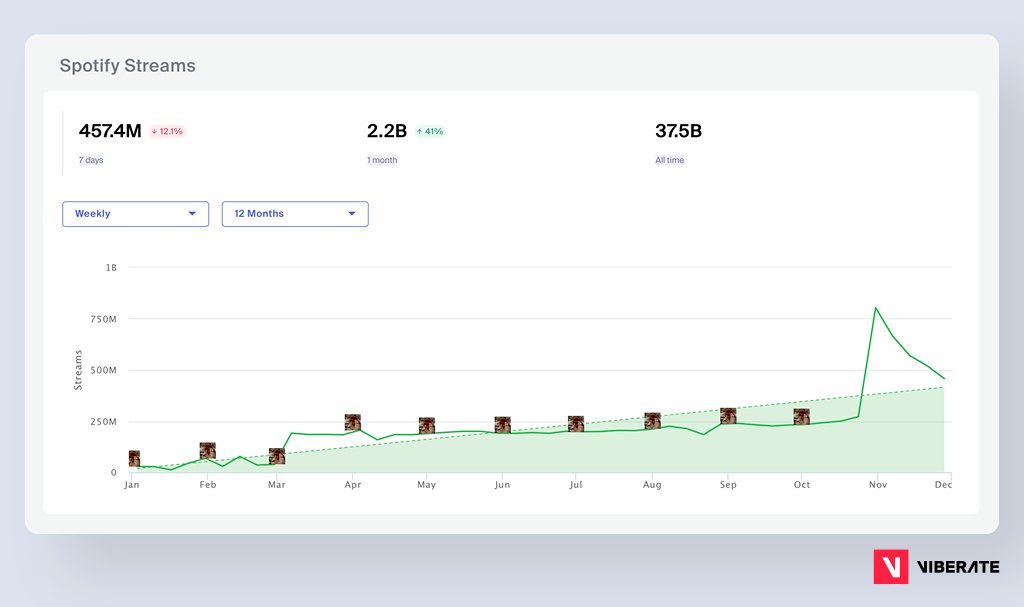 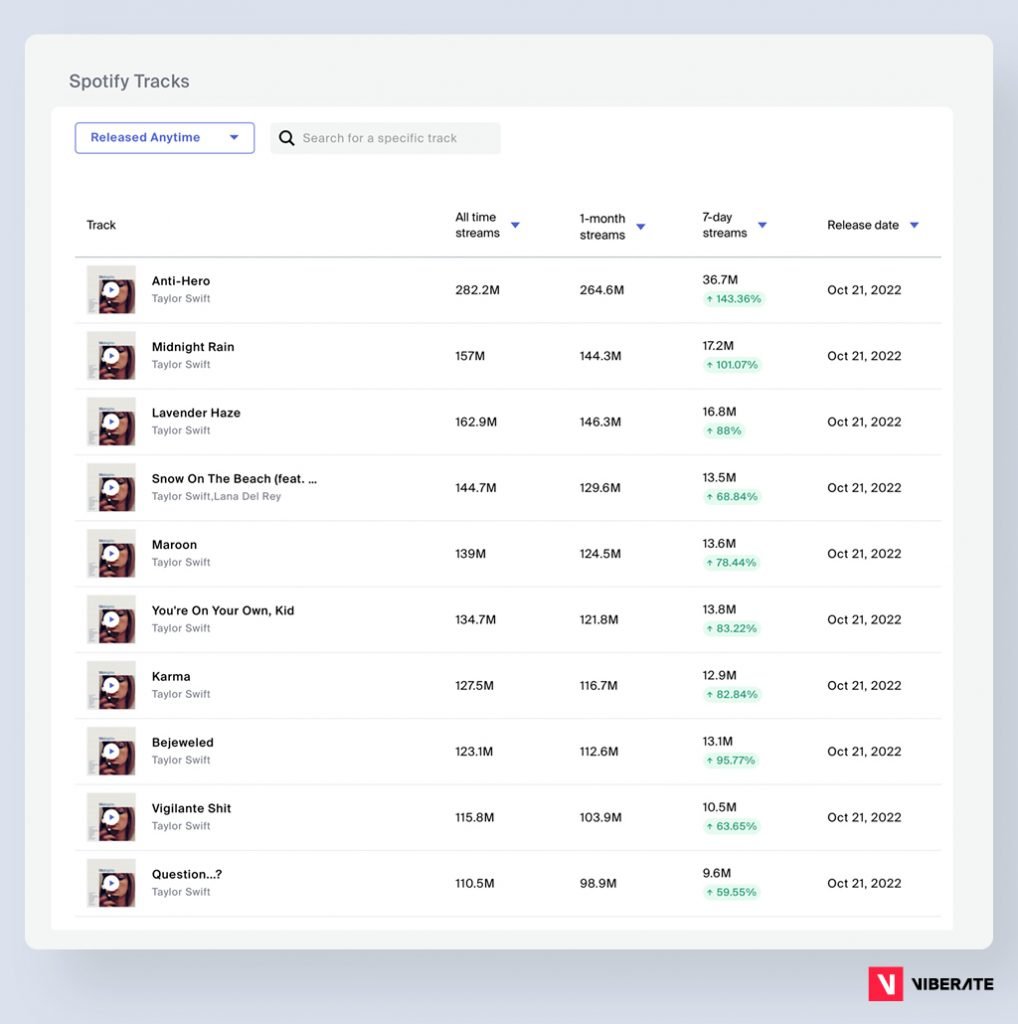 All the “Midnights” tracks have reached the top of the Spotify streaming chart. This is what the 7-day chart looked like 20 days after the album release:

We didn’t dive into branding in detail, but Swift’s a master in creating a comprehensive visual identity with images, outfits and communications that reflect the sound of each album and in doing so, create “eras” that are easily recognizable by her fans.

As a contrast to “folklore” and “evermore”, Taylor Swift returns to introspective songwriting in “Midnights”, diving into the stories that kept her up at night. Style-wise, the album is a sort of blend of all her previous albums, again prompting the listeners to guess which era a certain song corresponds to.

That’s why the subsequent “The Eras Tour” announcement on November 1 fit into the picture so well.

As part of the Eras Tour pre-sale, fans received a code that was supposed to let them buy tickets ahead of the general public, but things didn’t go quite as planned.

Because scalpers were eager to take advantage of the soaring prices on the secondary markets, fans had to compete with bots, and Ticketmaster’s technology couldn’t handle the demand. The site crashed during the Verified Fan ticket sale and hours of waiting and error messages ensued.

“The Eras Tour” still broke Ticketmaster’s record, selling over two million tickets in the November 15 pre-sale – so much so that there weren’t enough tickets left for the public on-sale.

This wasn’t just a lesson in supply and demand, but also a course in antitrust laws.

After Ticketmaster’s merger with Live Nation, the world’s largest concert promotor, many artists feel they don’t have a choice but to work with the ticketing service, and fans feel they have no choice but to deal with dynamic pricing and fees.

Remember when we mentioned Swift’s fanbase isn’t just Gen Z? Well, some of them are lawyers taking on Ticketmaster for violating antitrust laws under the name “Vigilante Legal”. Plus, the issue of competition in the ticketing industry is about to get an epilogue in a Congressional hearing.

Taylor Swift is proof that an engaged fanbase can move mountains, but we’re about to see whether Swifties can change the music industry itself.