Grooveshark attorneys are now exerting heavy legal pressure on Digital Music News, with the goal of outing a very problematic whistleblower.  Just this weekend, our offices received a mountain of subpoena paperwork from Grooveshark attorneys McPherson Rane LLC, a Los Angeles-based firm headed by celebrity lawyer Ed McPherson.  The aggressive and broad-reaching subpoena is designed to force the disclosure of the identity of the anonymous whistleblower, and gain access to any and all correspondence between Digital Music News, Grooveshark employees and plaintiff Universal Music Group.

The whistleblower, who surfaced as an anonymous commenter in this Digital Music News article late last year, could potentially bury Grooveshark and its parent, Escape Media Group.  The comment, itself buried in more than 100 responses, prompted a massive lawsuit from Universal Music Group, and the eventual participation of Sony Music Entertainment and Warner Music Group.  EMI Music will soon be roped by acquisition, while EMI Music Publishing has filed a separate action.  The Universal lawsuit, currently being heard in New York State Supreme Court, alleges that Grooveshark employees are instructed to upload copyrighted recordings into the application, thereby nullifying any protections afforded by the Digital Millenium Copyright Act (DMCA). 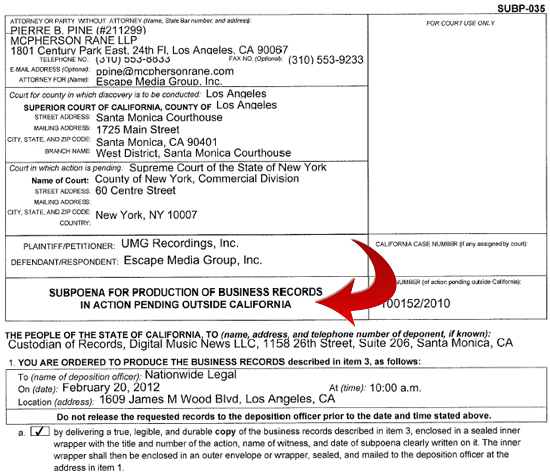 The far-reaching subpoena from Grooveshark is probably based on the assumption that Digital Music News is small enough to be intimidated, legally or otherwise.  That could prove a drastic miscalculation, especially considering a wide body of legal protections and precedents that protect journalists and their whistleblower sources, not to mention a determination by this publication to protect all informants.  The subpoena action may also stir additional information from unfriendly sources, which could be entered into the case and prove incredibly damaging to Grooveshark’s defense effort.

Separately, we’re also awaiting potential legal demands from litigant Universal Music Group.  The major is certainly throwing its legal weight around, with a long-running ‘legal jihad’ against Grooveshark. But its latest case seems a bit flimsy, especially given the anonymous and unsubstantiated identity of the whistleblower in question.  Which may be a prelude to another legal chapter in this case.

Specifically, the Grooveshark subpoena demands the following information (transcribed verbatim from the subpoena itself).

(1) Any and all correspondence or other communications between DMN and UMG concerning Escape, Grooveshark or the Article.

(2) Any and all documents concerning the correspondence or other communications described in the immediately preceding request.

(4) Any and all documents concerning the identity of the Second Anonymous Commenter (to the extent that person is, or may be, someone different than the First Anonymous Commenter), including, without limitation, that person’s name, address, telephone number, and e-mail address, and the IP address and ISP association with that person, as well as any other information that would assist Escape in ascertaining the identity of that person and/or the geographic location from which that person transmitted to DMN the written comments described in Definition H, above.

The complete subpoena document is here.

And, this is the comment that’s caused such a fuss. 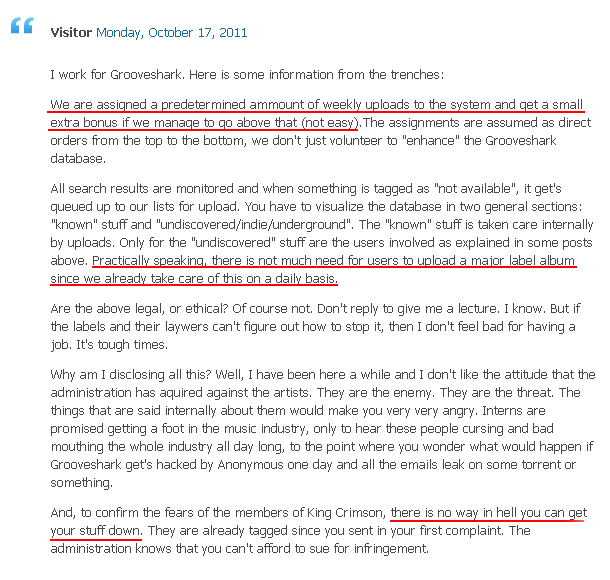