We’re guessing rivals like Tunecore have similar ratios, and this probably extends beyond the unsigned and indie space.

According to a year-2011 revenue analysis shared by the company, CDBaby artists pulled a massive 77.4 percent of digital revenues from the iTunes Store, on an aggregated basis.  AmazonMP3 was a distant second, but still a substantial 10.5 percent of the total.

Here’s the pie, as constructed by CD Baby. Physical CDs are a separate bucket. 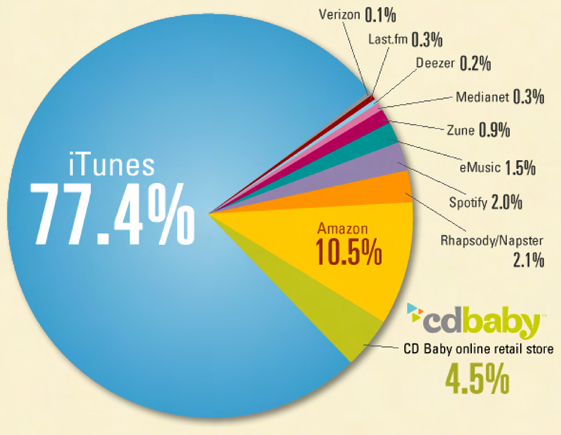 So what about streaming? Both Rhapsody and Spotify are represented, but only in small (though growing) amounts.  Perhaps surprisingly (or not), Rhapsody is edging Spotify out with a 2.1 percent share, slightly higher than Spotify’s 2.0 percent.  Others, like Deezer, are scant contributors, but are probably stronger in specific regions like France.

Here’s where this gets a little skewed: CD Baby counts 4.5 percent of digital revenues from its own store.  That’s likely accurate for its own customers, though this doesn’t translate as much to the broader indie or DIY space.  And, definitely not towards services like Tunecore.