The fallout is just beginning on Paul McCartney’s decision to remove his catalog from streaming services, a process that started earlier this week.  On Thursday morning, Rhapsody – easily the largest streaming subscription service in the US – expressed ‘shock’ over the teardown in this statement to Digital Music News:

“As has already been reported in the press,

Rhapsody was recently instructed to remove all McCartney content from our on demand streaming catalog. Rhapsody members have enjoyed streaming Mr. McCartney’s music for more than four years and are sure to be very disappointed to find that it has been restricted (such content is still available via our radio offering and for download). As the number-one premium subscription music service in the US with more than one million paying subscribers, Rhapsody has generated significant revenue for Mr. McCartney, his label and his publisher over the years, and has provided a compelling alternative to piracy. We have a great relationship with the label and Eastman Management, so this development was a shock.”

Separately, Spotify reiterated to Digital Music News that its McCartney takedowns happened back in 2010, a move that suggests a more comprehensive streaming ‘clean-up’ involving competitors.  Spotify also channeled that message to Billboard, whose Glenn Peoples unearthed earlier Spotify removals involving John Lennon’s solo works.  All of that leaves rivals like MOG and Rdio sweeping up the McCartney bits.

And Rdio? A separate source noted that Rdio is expected to be removing all content imminently, while metadata for all partners will soon reflect the unlicensed status.  Most importantly, the takedown orders leaked to Digital Music News mention that all downloads remain licensed.  Rdio declined to make any comment.

The teardown is perfect timing for an iTunes promotional blitz.  Apple just staged an exclusive live-stream of a McCartney performance from Capitol Studios in Hollywood on Thursday evening, and has been actively promoting the broadcast front-and-center.  Perhaps most importantly, that performance featured songs from McCartney’s standards album, Kisses on the Bottom. 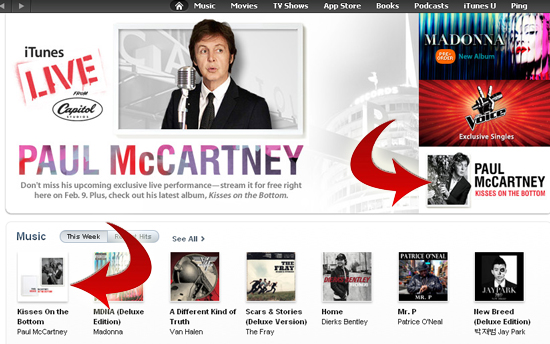 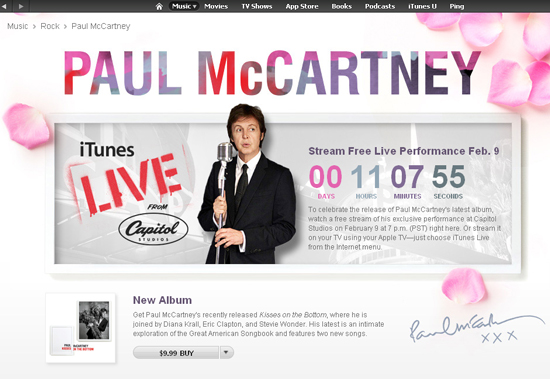