You don’t need a fancy report to tell you this.

Just look at what’s happened to the so-called ‘indie digital distribution’ space for ample evidence of major label domination.  The Orchard now features a massive ownership share by Sony Music, INgrooves Fontana is substantially owned by Universal Music Group, and once-indies like IODA and Iris Distribution have been swallowed alive by the machine.

Indie groups like A2IM will scream that they’re still in control, they’ll blast Soundscan and the majors for shady marketshare counting.  But according to a report just issued by the Consumer Federation of America and Public Knowledge, the fact that majors can get away with this creative counting proves they’re in a position of power.  “We interpret the recent brouhaha over the calculation of market shares as a demonstration that the independent labels have failed to diminish the market power of the dominant firms,” the report grates.  “We believe this dispute proves the continued importance of the majors, not their imminent demise. While independent labels have grown, they have been unable to escape from the domination of the major labels.”

But just how dominant are the majors in this picture?

“The independent labels are dependent on the majors for distribution of over 60 percent of their content, hardly a demonstration of their ability to challenge the majors with regard to fostering new distribution.”

Methodology please?  The groups calculated that indie marketshare is roughly 30 percent regardless of the ultimate distributor.  But when indie-only distribution channels are isolated, that marketshare shrivels to just 12 percent.

But who really cares about that? Universal Music Group, that’s who, especially as it tries to convince lawmakers to approve its pending acquisition of EMI.  Which would explain why the label is suddenly trying to undo its marketshare-grabbing calculations with an “eleventh hour flip-flop,” according to the report.  Because smaller marketshare means a smaller anti-competitive threat, which means the game suddenly changes.  And both Consumer Federation and Public Knowledge, both ardent opponents of this merger, are more than happy to expose that game.

But wait: majors still control a massive amount of music the mainstream wants – across physical and digital.  Which means the broader picture looks like this: 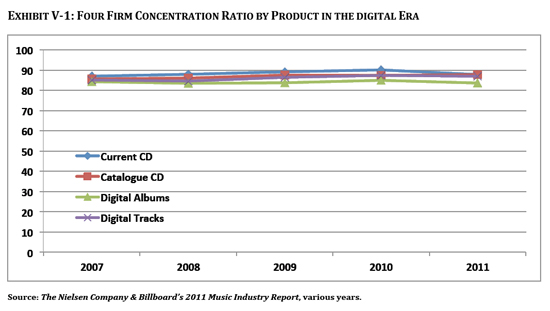 Perhaps this is just a prelude to the real problem. After all, massively-funded companies like Spotify aren’t paying royalty ransoms and doling out ownership stakes because it’s fun.  “Alternative distribution models must gain access to the content of the majors to succeed because, as we have already seen, the majors control such a large share of the music that sells across all media and genres.”

And more importantly, they can crush the small-but-growing level of independent marketshare by using these tactics.  “Major labels can stifle this competition by limiting the number of successful digital distribution platforms, which are the very places where independent labels’ offerings can compete with those of the major labels on a level playing field.  The major record labels may accomplish this by withholding licenses entirely or by demanding high advances, royalties disproportionate to their market share, or an equity stake in the digital service as a condition of a license.

“Any of these tactics threaten the long‐ term sustainability of independent labels.”