Well, here are two from free software and programming legend Richard Stallman (aka, ‘rms’), a longtime supporter of open software, content sharing, and copyleft concepts.  Stallman is a demi-god in many tech and programming circles, and credited with paving the path for open source systems like Linux today.

The following recommendations came as part of a broader weigh-in on the Emily White debate, which oftentimes devolves into details discussions of problems (and yes, we’re frequently guilty). 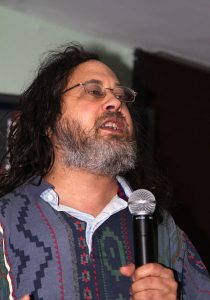 “Society should make it easier to support musicians, and other artists as well. I’ve proposed two systems for this, both of them compatible with legalization of sharing.”

See Copyright vs. Community, but here they are in brief:

(1) Put a tax on internet connectivity, and divide the money among artists.

Why the cube root? So that most of the money goes to the artists that really need help — those who are good and somewhat successful, but not stars. Each star would get more from this system than a non-star, but not tremendously more, so the few stars together would not get most of the money.”

(2) Give each player device a button to send 50 cents anonymously to the artists.

They you could push the button and send money, when you wish. (I used to suggest one dollar, but the banksters have impoverished the American public so much that a smaller sum is now called for.)

Either way, if the system is to support the artists, we need to stop the publishers (such as record companies) from taking this money for themselves.

[Emily,] I beg you to reconsider this issue, and resume maintaining your own local copies of music — copies that you are in a position to share with your friends, copies that you can listen to without letting any company monitor or control your use.