I’m Here to Defend My Book, ‘The Beatles: Extraordinary Plagiarists…’

If you have the balls to write a book like The Beatles: Extraordinary Plagiarists, then you probably also have the balls to defend it.  Last week, author Edgar O. Cruz battled a litany of attacks – often personal in nature – on this very book, which is 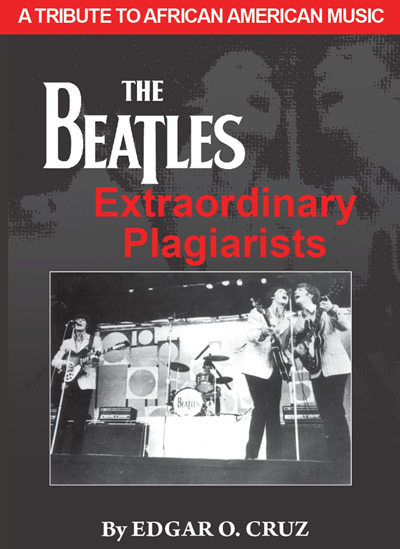 largely predicated on the theory that the Beatles were more borrowed than brilliant.   Here’s an email Cruz sent to Digital Music News this morning, with specific examples of the plagiarism he’s been outlining to prove his thesis.  This is an author defending his work, and comfortable taking a few blows in the process.

Dear Paul, Who says the Beatles were extraordinary plagiarists? The complete melody of “Yesterday,” the Beatles’ most covered song with 3,000 plus versions, came to composer Paul McCartney in a dream.  Giving it the working title of “Scrambled Eggs,” it took 18 months to write the lyrics and record for fear that in it is a case of cryptomnesia, the scientific term for subconsciously plagiarizing somebody else’s work. On pages 60/61, my book states, “…the melody was an unconscious distillation of Ray Charles’ version of Hoagy Carmichael’s “Georgia On My Mind”… [and] has similarities in the lyrics and rhyming schemes (the use of words ending in ‘ay’) of Nat ‘King’ Cole’s ‘Answer Me My Love’.” The song’s hokey lyrics…

‘You were mine yesterday

I believed that love was here to stay Won’t you tell me where I’ve gone astray Please answer me, my love…’   …were rehashed by McCartney to the less hokier

‘Yesterday, all my trouble seemed so far away

Now it looks as though they are here to stay Oh I believe in yesterday.’   Plagiarized? For sure, the attitude is there, even the attempt not to duplicate the template.  But it’s not an original work but a mishmash.  Read more revealing details in the book.

If the Beatles released this song in the digital age where almost anything can be Googled at tremendous speed, McCartney would have been caught quickly and not lauded as a genius.

And this was not a single act.  Plagiarism in various degrees was involved in the Beatles’ stat of 213 officially released songs in the United Kingdom involving mostly McCartney and John Lennon.  (‘You Got to Hide Your Love Away’ is ‘a direct copy’ of Bob Dylan’s ‘The Lonesome Ballad of Hattie Carroll’ squealed McCartney) and George Harrison (the first two lines of “Something” was lifted from James Taylor’s “Something in the Way She Moves”).   Even iconic producer George Martin used a snippet of Glenn Miller’s “In The Mood” for “All You Need Is Love” without permission.

My 172-page book fiercely details in seven chapters plagiarism as the source of the Beatles’ relentless creativity.

Main tunesmiths Lennon and McCartney, described as “the greatest composers since Beethoven,” were ‘original’ plagiarists in the context of English author William Ralph Inge’s definition of originality as the ‘undetected plagiarism.’ Unschooled in music, Lennon and McCartney composed the most viable songs of their generation leading Dr. Joseph Crow to liken the feat to inventing the A-bomb without knowledge of the laws of Mathematics or Physics. Individually or collaboratively, they mostly got away with plagiarism having perfected the art of rehashing. Discriminately borrowing other artists’ works, Lennon and McCartney thwarted the plagiarists tag during the Beatles’ lifespan by successfully presenting themselves as original songmakers without getting spotted, which made them ‘Extraordinary Plagiarists’.  Although badass McCartney would invariably term the act as inspiration or parody, the book illustrates extensively the multiple methods how they plagiarized. The Beatles mainly did this by duplicating the riffs of other bands/solo acts by not exceeding the two bars threshhold (the opening of “Come Together” was culled from Chuck Berry’s “You Can’t Catch Me”); rephrasing song lyrics and passages from literature (“Khalil Gibran’s Sand and Foam in ‘Julia’); reinterpreting recording techniques (to produce the loudest rock song more than The Who, McCartney rewrote the group’s “I Can See For Miles” infusing the Jimi Hendrix style); and reproducing emerging styles (‘Ob-bla-di Ob-bla-da’ was drawn from Jimmy Scott and the Ob-la-di Ob-la-da Band without permission, producing the earliest version of reggae.)

The majority of the Beatles’ act of copying were conscious and intended.

The tandem plagiarists often snooped at live shows and recording sessions of other musical groups and their style would ultimately surface in the next Beatles songs. When he went down six times to the Jimi Hendrix Experience in London, the greatest electric guitarist’s distinctive shouted introduction amazed McCartney, creeping on “Sgt. Pepper’s Lonely Hearts Club Band’s” opening. That’s outright nicking. Lennon and McCartney admitted the flap when exposed, even volunteering information.  Interviewed about the authorship of Beatles songs after the Big Split, the partnership had the common sense to clarify the ownership breach, no longer bothered by wranglers wanting lump royalty payments. Here’s a shocker, page 157.

In a 1982 talk for Playboy magazine, McCartney admitted in a streak of honesty about intellectual theft: ‘Oh, yeah. We were the biggest nickers in town. Plagiarists extraordinaires.’

But the question of origination does not reduce the sonic pleasures the Beatles’ body of songs have provided to billions of avid listeners through the decades. This is the constant legacy nobody could take away from the Extraordinary Plagiarists, not even this book. – Edgar O. Cruz.