In Britain, a Streaming Explosion Could be Causing an Album Implosion

Is streaming causing an unexpected plunge in the British music market?

The UK was once considered safe from monstrous, cliff-like album drops, thanks to a strong, often rabid musical culture.  But that abruptly changed this year, when albums started experiencing double-digit percentage declines.  By the time July rolled around, the IFPI counted a 13.8 percent decline in first half album sales across both physical and digital units.  That’s a shortfall of roughly 7 million albums.

This is either a short-lived crash, or the beginning of the end for bundled CDs and songs.  But by mid-August, Rihanna scored an unfortunate first: her album, Talk That Talk, topped the album charts on sales of just 9,578 physical and digital units, an all-time low for a chart-topping number one.

There’s another side to this.  At the midpoint, song downloads were up a modest 6.3 percent, while smaller digital albums gained 17.3 percent.  That suggests complementary gains on digital, but are we just making ourselves feel better here?  According to details emerging this week from Universal Music UK, on-demand streaming volumes on platforms like Spotify have multiplied more than sevenfold this year alone, a far greater gain.  And, that’s with 6 weeks to go: David Joseph, chairman and CEO of Universal Music UK, recently told the Guardian that more than 7.5 billion songs have been streamed in the country year-to-date, compared to 1.1 billion in 2011.

That doesn’t even include an additional 250 billion YouTube streams, the supersized elephant in the room. 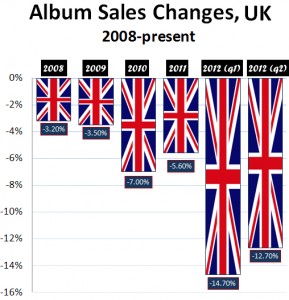 Suddenly, the British market is starting to go haywire.  The UK is typically a premier exporter of musical culture, yet its influence has unexpectedly tanked in 2012.  According to Joseph, less than 10 British acts have broken this year, down from 19 last year.  “There are two or three more acts to break but it doesn’t look like it’s reaching 19,” Joseph recently told the Guardian, while benchmarking a volume of about 20 breakout British artists per year.

And, here’s the kicker: Joseph doesn’t regard an act as a breakthrough until at least 100,000 albums have been sold.  See the problem here?

It’s a jumble of different variabes to sort through. Joseph largely blames radio for failing to champion promising artists, and even hints that radio has a responsibility to help develop new artists.  By contrast, players like Spotify are rarely considered tastemakers despite their enormous usage, a profile the company would like to change.  “The BBC does an amazing job introducing new artists,” Joseph continued. “On commercial radio it often feels we have to create a hit first before commercial radio wants to play it.  I would love to see commercial radio take more risks.”