Study: Copyright Law Is Only Benefiting a Tiny Sliver of Musicians…

That’s according to an academic study just released by Northwestern University School of Law, which found that a vast majority of artists are not motivated by copyright protections, and frequently not benefiting from them.  Instead, the slim prospect of widescale popularity, fame, and recognition may be far stronger lures.

Even among those working in the real world, a large number of successful artists generate revenue from areas that are only indirectly linked to copyright protections, if at all, including live performance, session gigging, merchandising, or instruction.  Only those at the top are reaping large benefits from copyright (and therefore, care about it).

“Rather than providing marginal incentives to create to all musicians at all times, copyright law mostly affects the revenue of the highest­-income musicians in a direct fashion.

This is not a surprise, given the prevalence of winner-take-all markets in the entertainment industry.”

The study, conducted by Northwestern assistant professor Peter DiCola, used a previously-released survey of 5,000 musicians (through the Future of Music Coalition), primarily to determine the actual sources of income.  The intent was to find out (a) where musicians are making their money these days, and (b) how important copyright is to those revenue sources.

Here’s a breakdown of where musician incomes are derived. 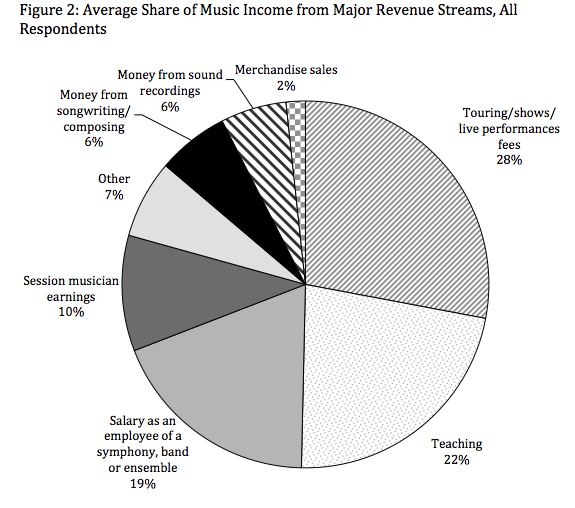 And, how that maps to copryright protections. 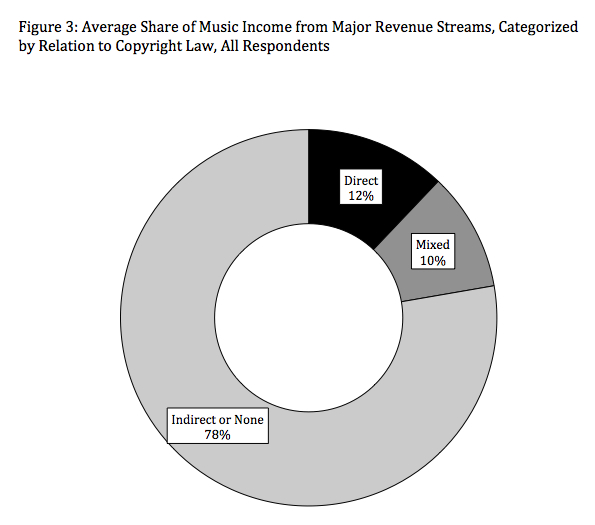 The harder question is how much musician behaviors and choices would change if copyright protections were strengthened (or respected more).  Indeed, this is an area the researchers discussed, noting that musicians are often adaptable creatures that shift depending on revenue prospects (conducting to teaching, composing to session gigging, etc.)

Beyond that, there’s the very real possibility that better copyright is better for all musicians and creative companies, directly or indirectly.  Indeed, there’s a very defensible argument that the entire ecosystem is now suffering.  “For instance, better
enforcement could help record labels’ bottom lines to an extent that the
labels could begin offering larger advances and greater support to artists
again,” DiCola concedes. “Nothing in the [Future of Music] survey, which focused on the
money that reaches musicians’ bank accounts, can confirm or deny this story.

“Thus, it is important to remain open to the possibility that copyright enforcement might indirectly benefit musicians by strengthening the system in which they work.”