The Obama Administration Says a $222,000 Fine for File-Swapping 24 Songs Is ‘Appropriate…’

This is no accident: after all, the Obama Administration is littered with ex-Recording Industry Association of America lawyers.  But the question is whether the US Government is ‘doing it wrong’ by raiding pirate compounds in New Zealand, bullying programmers into suicide, and doling out heavy-handed advice like this. 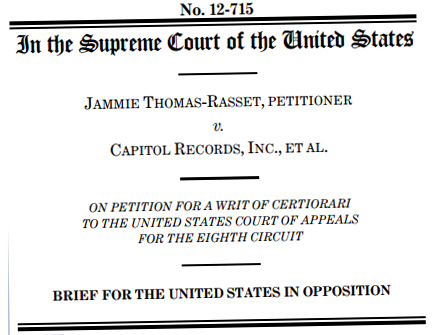 In an opinion just delivered to the Supreme Court, the Administration has urged the Justices to uphold a $222,000 judgment against Jammie Thomas for uploading 24 songs.  That is, by simply rejecting to hear the case entirely.  The case dates back to 2007, around the time when Kazaa was the file-sharing app du jour.

Thomas’ lawyers want the Supreme Court to judge on whether the fine is unfairly excessive and therefore unconstitutional.  But this is not an issue of constitutionality, according to the Administration, but rather an issue of the sanctity of copyright and the incentives it creates. “In particular, the exclusive rights conferred by a copyright are intended to motivate the creative activity of authors… by the provision of a special reward, and to allow the public access to the products of their genius after the limited period of exclusive control has expired,” the document asserts.

Indeed, copyright needs to stand for something.  But… $222,000 for 24 songs, which would have given major record labels about $16.80 ($24 x iTunes’ $0.70 royalty) if Thomas had paid?  Absolutely “appropriate” according to the recommendation, especially since a jury actually fined Thomas $1.5 million at one point (this is a case that has gone through three full trials.)

There’s also the issue of whether Thomas, a single mom with limited computer literacy, should be sent to the gallows of near-certain personal bankruptcy.  Thomas is no Bambi, but then again, there are far worse copyright criminals on the high seas.  “Jammie Thomas-Rasset’s copyright infringement was willful in the extreme,” the major labels, as represented by the RIAA, blasted in a statement.  “Three separate juries have concluded that her blatant and unapologetic violation of Respondents’ rights warranted a substantial award under the Copyright Act’s statutory damages provision.”

A copy of the full recommendation is here.

Written while listening to Kris Menace on Pandora.