That’s Spotify, Rhapsody, Muve Music, whatever, free or paid within the past six months, according to findings just shared by Ipsos MediaCT.  Which is a bit more than half that of paid download platforms, primarily iTunes and Amazon MP3, at least in the US. 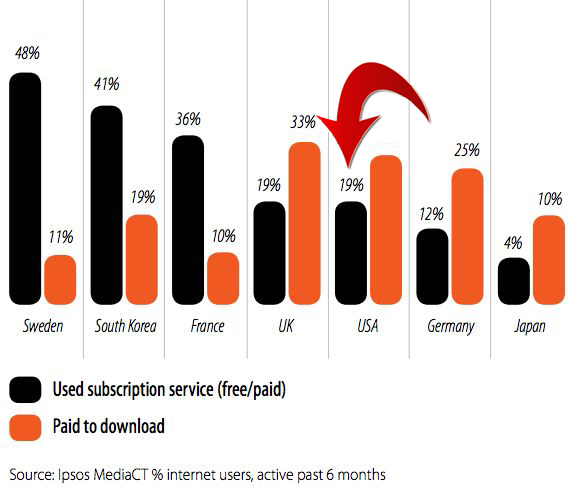 Of course the number is off the charts in Sweden, but the question is how aggressively that number ramps in other countries.  In the US, even a mild ramp-up could make a big difference: currently. Spotify, Rhapsody, and Muve Music alone count roughly 3.5 million paying subscribers.

Then again, we should warn that the Ipsos report does have that curious ‘sponsored research’ odor.  Which might be because the report was commissioned by label trade group IFPI, and packaged into the group’s recently-issued 2013 sales report.  The study involved roughly 7,500 survey participants across the nine countries, which, according to Ipsos, represent 80 percent of the total music market.

Oh, and Japan?  That’s another article entirely (weren’t they renting CDs up until recently)?