This is one of the biggest debates in music right now, and it goes far beyond morality and artist rights.  Because what if pirates are simply buying more stuff? 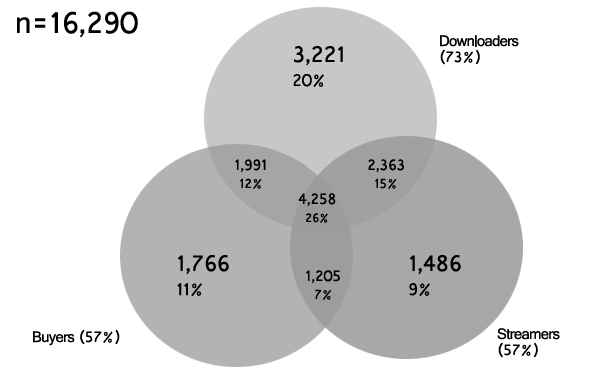 That’s actually the conclusion of a new study just published by the European Commission‘s influential Joint Research Centre, one that involved more than 16,000 participants across five EU countries.  And at a top level, the survey, conducted by the Centre’s Institute for Prospective Studies, found very little cannibalization between illegal and legal.  “Perhaps surprisingly, our results present no evidence of digital music sales displacement,” the report concludes.

“Our results suggest that internet users do not view illegal downloading as a substitute to legal digital music.”

“This means that although there is trespassing of private property rights (copyrights), there is unlikely to be much harm done on digital music revenues.”

But beyond that, the Centre also concluded that a positive (albeit, small) correlation between illegal and legal is happening. This was based on observations of clicks and site visits among the sample.  “If this estimate is given a causal interpretation, it means that clicks on legal purchase websites would have been 2 percent lower in the absence of illegal downloading websites,” the report states.  That number shifts to 7 percent when legal streaming and paid download sites are compared.

“The complementarity effect of online streaming is found to be somewhat larger, suggesting a stimulating effect of this activity on the sales of digital music.”

The survey went beyond simple questions and answers: across five EU countries, the research group also analyzed actual web usage to get a sense for actual behavior.  That was mapped against demographic data.

The policy implications of this study could be massive, especially for programs like HADOPI.  Just recently, HADOPI data showed a massive dent on file-swapping levels, but no complementary gain in actual sales.

On that note, the authors of the study declined to offer a policy recommendation, but the leanings were obvious.  “Digital music revenues to record companies are growing substantially,” the study observed.  “They increased more than 1,000% during the period 2004-2010, and grew 8% globally in 2011 to an estimated US$5.2 billion, reﬂecting the importance of digitization in the music industry (IFPI, 2011, 2012).”

“From that perspective, our ﬁndings suggest that digital music piracy should not be viewed as a growing concern for copyright holders in the digital era.”