Exclusive: Streaming Revenues Now Surpass $1 Billion Annually In the US…

That’s according to revenue statistics shared with Digital Music News by label trade group RIAA, and it includes everything from Spotify to Pandora to YouTube to Sirius XM Radio.  Anything that falls under ‘access’ instead of ‘ownership,’ ad-supported or subscription.  “Collectively, [access services] went from just 3 percent of total industry revenues in 2007 to 15 percent in 2012, totaling over $1 billion for the year,” an executive from the group shared. 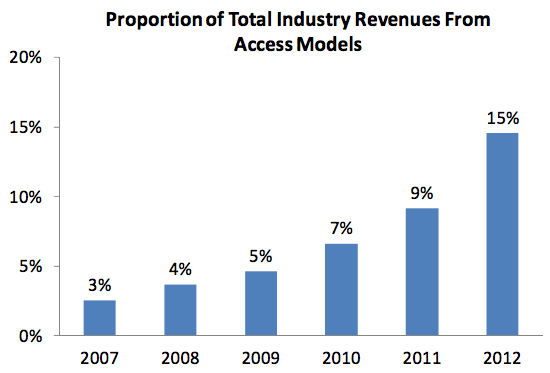 The more exact total, according to the RIAA count, is $1.033 billion.  On the subscription on-demand front, the group counted 3.4 million subscribers, averaged across the year.

Sounds great, but there’s only one problem with this picture: streaming revenues are still just a fraction of CD revenues, and CDs are tanking.  Which means the overall pie is also still shrinking (see below).  According to the RIAA, CDs raked $2.5 billion in 2012, though digital formats (including downloads) now account for nearly 60 percent of overall recorded industry revenues.

Unclear is whether upfront advances to companies like Spotify are being factored into this calculation.  The advances, often millions per label, are now becoming a business model unto itself for struggling major labels.  And, according to sources close to these transactions, very little of the advances or subsequent major label payouts make it back to artists.

And what about Pandora, which is currently begging Congress to lower its royalty obligations?  Well, there’s a reason why labels have little interest in softening these rates.  According to the RIAA, online radio and satellite formats now account for 44.7 percent of broader streaming revenues.  And that’s a lot of money. 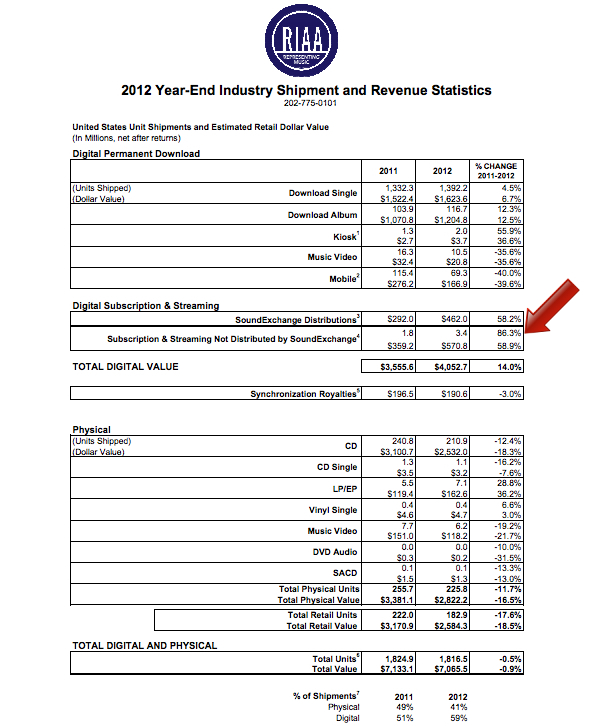