Grooveshark attorneys say this is simply a matter of ‘narrowing and simplifying‘ the case by removing certain executive defendants.  In that case, it appears that just a small handful of Grooveshark brass now face billions in copyright infringement claims.  Among those not signing the agreement are Grooveshark cofounder and CEO Samuel Tarantino, and cofounder and CTO Josh Greenberg. 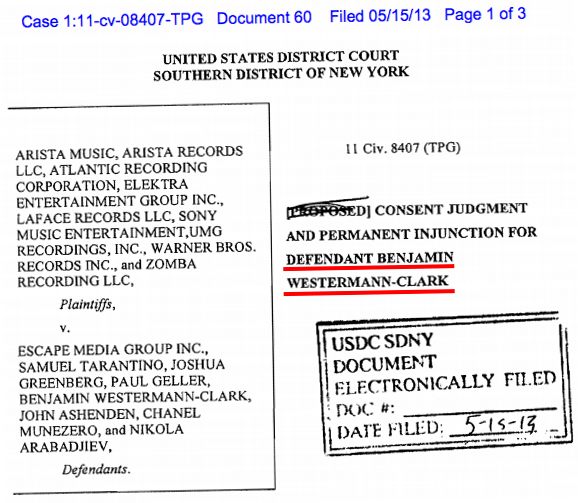 The others, according to additional legal documents obtained Wednesday by Digital Music News, have all signed binding, ‘consent judgments‘ and ‘permanent injunctions‘ against future copyright infringement.  A document signed by Quality Assurance Specialist Nikola Arabadjiev first emerged over the weekend.

All five of these defendants have been specifically accused of knowingly uploading major label catalog into the Grooveshark database.  That is a gigantic ‘no-no’ for a company claiming a DMCA defense, though Grooveshark denies the claims entirely.  Just one signing individual, Nikola Arabadjiev, appears to be actively employed by Grooveshark at this moment.

The quick agreements merely state that the defendants will not infringe against the labels’ catalogs, either as part of Grooveshark or any future company.  The broader subtext of those agreements remains unclear.

More details on the agreements can be found here.

In total, these individuals were being accused of billions worth of infringement, based on a $150,000-per-work calculation.  Overall, major label damage claims surpass $17.1 billion.

Exactly what this all means for the broader case is difficult to determine at this stage.  Of course, theories abound: one speculation is that the settling executives are essentially signing for immunity against future legal actions, while agreeing to testify against the cofounders and other top executives (again, the key word is ‘speculation‘).

Another take is that the settling executives have forged individual agreements, possibly punitive ones, the details of which are unknown.

More as the situation progresses.