Why did Twitter #Music die after just one week?  Immediately after launch, Digital Music News questioned whether it made sense to demand payment for full streams, something that the stats sadly supported.

But here’s what Stephen Phillips, a top executive at Twitter #Music, told Digital Music News during a question-and-answer session at SF Musictech Summit on Tuesday.  Phillips founded We Are Hunted, acquired by Twitter to power the music play. 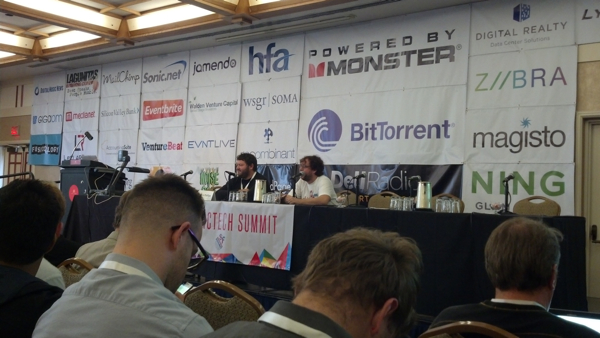 Digital Music News (Paul Resnikoff): I’m really wondering what happened in terms of Twitter #Music’s profile.  It launched and there was so much hype around it, and it was the number one ranked app and it was blowing up.

Then a week later, it was falling so quickly; it seems like this is becoming endemic to this space.

Obviously from the numbers they’re one of the biggest music apps around already, and I’ve got a dedicated team that’s been building music apps for ages, and we plan to move pretty quickly.

And I think in year’s time we can look at it and say, ‘has this been a success or not?’  And that would be a fair time to judge it.

Audience Member: Hi there, I’ve used We Are Hunted for years for music, loved it —

Phillips: So did I, it was really good [audience laughter]

Phillips: Yeah, we’re kind of hoping our partners will solve that one [audience laughter]. That they’ll be the ones who convince people to buy their products.

We’re going to help if we can.  It was really cool to bring Rdio and Spotify to the table, we met them three weeks from launch and said, ‘I think it would be really cool if you joined into this.’

And we said, ‘how can we make this easier to get people to use these services?’  But I’m not sure we’re going to be the ones to sell that.  It’s not going to be wont of letting people have opportunities to buy music they want.

I believe there are people who will never [buy music] again.  And they’ll just have to monetize in other ways.