Clear Channel President: “Not All People Can Afford a $15 a Month Subscription…”

This week’s most anticipated news may have been the almost-launch of Apple’s iTunes Radio. Yet the president of Clear Channel, John Sykes, has told Digital Music News that those declaring the imminent death of terrestrial radio are way off base:

“They don’t realise that not all people live in big cities such as New York City and Los Angeles. And not all people can afford to pay a $15-a-month subscription.”

At his State of the Industry keynote at the New Music Seminar, Sykes told the audience that terrestrial broadcast is alive and well, and still has the biggest reach and is a more powerful discovery tool than any other music platform. “Over 92 percent of the US population that are over 12 years old still listen to radio for an average of 2.1 hours a day,” he said.

“That’s pretty much the same percentage of the population that was listening to radio in the 1970s – and it’s still the basic way people discover new music.”

On a panel that included the PepsiCo global CMO of Consumer Engagement and Rio Caraeff, CEO of Vevo, Sykes also claimed that the broadcast giant was one of the best pals the music industry could ever have, reaching around 240 million Americans a month. “We curate,” he said. “We may come in late [in the discovery process] – but we are still the number one place where people discover music.”

Sykes also claimed that Clear Channel is “investing heavily in helping develop new music”. After all, he said, the company knows that if radio doesn’t play a record, it’s not going to break. 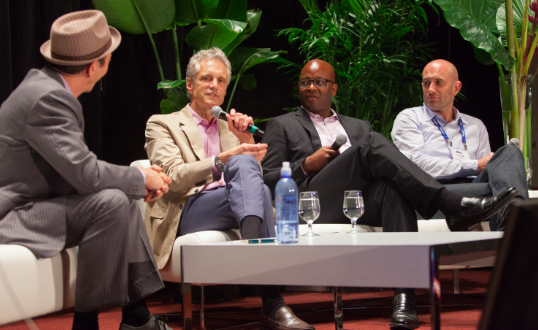 “We even have to cherry pick the familiar. You have to develop your future artists, but it’s hard. If a new song doesn’t get you in two notes, people switch the station. So we try to make people give it a chance by saying beforehand: this is a cool band.”

“Leanback” has been a recurring them in many of the New Music Seminar panels, including the digital music service subscription panel featuring Slacker, Spotify, WIMP, Rhapsody, as well as Warner Music Group and Sony Music. Most people don’t want to to always make decisions, is the new mantra.

Tommy Silverman even declared that “leanback” is “where the future lies”.

For a giant company such as Clear Channel, revenues from digital broadcasts are still a very small compared to terrestrial revenues (though that may change if/when it is required to pay artists for all performances), but they still play an important role. “We are working with the entire music industry to find the right models to accelerate the sustainable growth of digital broadcast radio simulcasts to match digital music collection growth.”

The problem, he said, is that advertisers have had a hard time getting their head around the digital space. “When we started MTV back in 1981, advertisers didn’t understand it,” Sykes reflected. “And now it’s deja vu all over again.”

And if anyone thought Clear Channel were upset that Billy Armstrong of Green Day swore and stormed off stage at last year’s iHeartRadio concert, Sykes set the record straight: “That made our day.”