I’m Jeff Price. And This Is My New Company, Audiam…

The following comes from Jeff Price and Peter Wells, both co-founders of TuneCore and now… Audiam.

The music industry has changed since we launched TuneCore in 2006. Last decade, the rise of iTunes let us overturn the old music distribution model. This decade, YouTube has created an unprecedented opportunity for artists to generate new revenue from a second income stream and engage with fans in a way never seen before.

Everything is in place for another revolution (evolution?)

Imagine a world where music fans can legally — and for free —create videos containing music they love, upload these videos to YouTube, have YouTube license the music the videos were made and then have advertisers pay the artists and copyright holders for the use.

Even a single song by one artist can be used by hundreds, thousands or tens of thousands of fans. Each video is its own creation with its own potential to become a “hit,” from lyric videos to “unofficial” music videos to music in the background as the wedding party dances. Each work of art has the potential to become popular, and with each view, money can be generated and the artist can be promoted

It’s time to democratize and change the music industry again, this time with YouTube.

For the old music industry, the world used to be a simple place. The label decided which artists to let in, signed them to contracts, took their copyrights, made 12″ pieces of vinyl or 5″ pieces of plastic and shipped them on trucks to stores.  Music was promoted on MTV, commercial radio and print magazines. Consumer choice was limited to what the labels thought was good. If the consumers liked the song, they went to a physical store to buy the vinyl or plastic, take it home and stick it on a turntable or in a CD player and listen to it.

And that was the end of it.

Boy did technology screw that system up.

Artists no longer need labels to record, market and distribute, and consumers began to not just listen to music and use it in ways they never had before. They reviewed it on their own blogs and offered free downloads or streams of songs. They created their own mashups. They shared it with the world via BitTorrent and Napster, and then made videos and uploaded them to YouTube.

This pissed off the old industry. Consumers were not supposed to use the music, they were only supposed to listen to it. Instead or understanding that they had a team of hundreds of millions of people willing to market, promote and generate more money for the labels for free, they started suing them. Brilliant strategy.

If harnessed, they could have marketed artists and created a new SECOND income stream when fans USED the music. But the majors, instead of finding a way for everyone to win, tried to shove the genie back in the bottle.

The number one place on the planet where music is used is YouTube.

It currently has over 25 billion views each month of videos with music in them – and this number is rising.  Over 95 percent of these videos were made from scratch and uploaded by the music fan.  YouTube has over a billion unique visitors a month and generated an estimated $3.6 billion in ad revenue in 2012. Current estimates project YouTube earning over $20 billion in ad revenue over the next 7 years.

Shut it down?  Are you nuts?  You could not shut it down if you wanted to. Monetize it.

YouTube can be a friction-free environment that can make money, promote artists and let hundreds of millions of consumers willingly and joyfully build the eco-system without being sued, and it’s the very system the labels have been trying to shut down.

Here how it works:

1) Let’s say you take a video of your three fingers wiggling. You would own the copyright to that video, and no other entity on the planet could use it without your permission.

2) When you upload the video to YouTube, you are giving them permission to let others watch it on their system. If you want, you can become a YouTube “Partner,” which allows YouTube to place ads in or on your video. When advertisers pay YouTube for the ad, YouTube takes about 45 percent of the money and pays you the other 55 percent. That’s the basics of YouTube and how it generates money on ads.

3) Things get a bit more complicated when music is involved.

To keep things simple, lets just say Dolly owns all her own copyrights.  In order for YouTube to make ad money off this video, it needs the OK from:

1) The person that made the video

Arista Records has a choice: it can notify YouTube to take down videos that have their recording in it (only to have them pop back up again tomorrow), or it can enter into a direct licensing agreement with YouTube.  When it enters into this deal, it can then tell YouTube what recordings it controls, find videos on YouTube that have the recordings in them and authorize YouTube to sell ads into those fan-made videos.  Further, the label can send YouTube a copy of its recording of the song, and YouTube will digitally “fingerprint” the song and begin an automated search through all of its billions of videos (past, present and future) looking for digital matches.

Arista now has three choices. It can:

1) Track the videos (this lets the videos continue to exist on YouTube, so long as Arista can see the data YouTube’s analytics provide);

2) Take down the videos;

3) Authorize YouTube to sell ads on or in the videos.

Until recently, the major labels resisted YouTube. But the tide has finally turned, and they have reluctantly, begrudgingly started to click the right button. The problem is, most artists do not have access to a system that allows them to make money off the use of their music in YouTube.

We’ve got the contracts with YouTube, we’ve got the access to CMS, we’ve got the infrastructure to deliver “fingerprints” and retrieve the money artists earn. And we’re putting that power into the hands of independent artists. 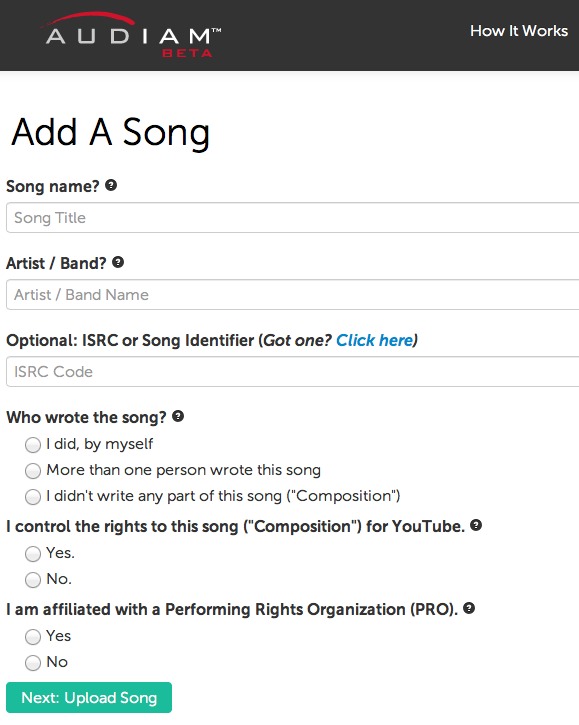 As of today, YouTube is no longer the realm of the major labels—any artist almost anywhere in the world (coming to the US very soon) can use YouTube to make money and promote themselves.

At Audiam.com they can create a free account, enter basic information about the music (title, artist), upload the .mp3, .mp4 or .wav file (also free) and click the button and we’ll take it from there.

Audiam will “fingerprint” it, deliver the fingerprint to YouTube, get them to start searching their vast hoard of content for any matches and identify those videos that use the music. When we find a match, we tell YouTube to “monetize” it (put ads on it).

Maybe the video already has ads on it? No problem, Audiam stakes the claim for the artist and starts collecting the revenue they deserve. We charge a 25 percent administration fee and the rest goes to the artist.

The music business has come to YouTube, and Audiam is going to democratize it. It’s sort of a habit we’ve fallen into.”