British performing right society PPL is now contacting big US radio stations demanding that they either start paying royalties or block webcasts from being accessed in the UK. So far, stations are choosing to block rather than pay.

In its email to US broadcasters, PPL points out that major radio groups such as Clear Channel and CBS Radio already geo-block their webcasts. So far, no broadcaster has opted to negotiate a licence with the collecting society, apart from a few pureplay operators, including Live365. 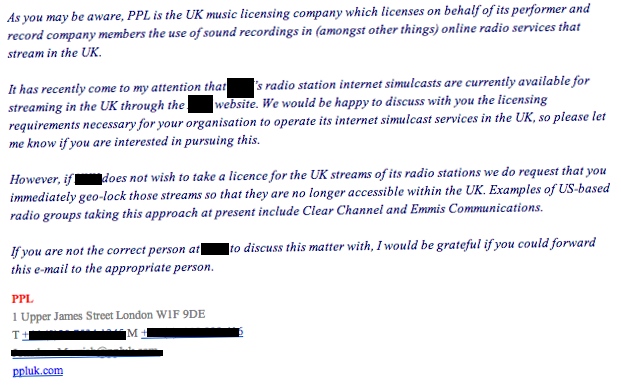 PPL negotiates and collects royalties for performing rights to owners of the master recordings, performers and non-featured musicians. Essentially, it’s the British version of SoundExchange. However, unlike US stations, UK terrestrial radio stations are required to pay performers as well as songwriters, and PPL collects for those royalties as well.

PPL has a reciprocal agreement with SoundExchange for online performance royalties, meaning that UK artists get paid when their music is listened to on American online radio stations, and vice versa. Or at least they’re supposed to – as online broadcasters are required to pay PPL when the music they play is listened to in Britain.

“In the case of the US, the SoundExchange-administered statutory licence only covers webcasting of recorded music in the United States. Therefore a US-based webcaster would also need to ensure that they are licensed for their streaming of recorded music into each country outside the US, or they must ensure that they have geo-locked their service so that it is only available for streaming in countries in which they are appropriately licensed.”

PPL’s email highlights the need for US-based online radio broadcasters to keep track of where on earth their listeners are based – after all, they need to deduct those listening figures from the data they supply to SoundExchange.

The only problem is, no one’s paying (for various reasons). One American radio executive told Inside Radio that striking a deal with PPL could set a precedent and “open the door to rights organisations from around the world coming after US broadcasters”, indicating most broadcasters will opt for geo-blocking.

The director of digital strategy for Cox Media Group, one of the broadcasters that have received the PPL letter, claimed that while 30% of its web listening comes from out-of-market users, a “much smaller” percentage is international.

PPL’s royalty rate for a commercial online radio station is £0.000722 per performance (one performance is when one listener streams one recorded music track broadcast in the service). The rate for customised broadcasting – when listeners can skip or pause tracks – varies, depending on how often they’re allowed to skip tracks etc.

UK residents listen to plenty of online radio, including a multitude of BBC stations – including the brilliant BBC6 Music and 1Xtra – and commercial stations. Matter of fact, there are hundreds of online radio stations. For those wanting to go even more niche, there’s Amazing Radio, which plays plenty of unsigned artists.

Clearly, it’s more than possible to run an online radio station while paying artists and songwriters properly. Perhaps if US broadcasters lowered their profit expectations, they wouldn’t have to geo-block. The likelihood of that, of course, is pretty much nil.