The music industry should stop obsessing about getting Google to downgrade copyright infringing sites in its search results, according to a new report published by the Computer & Communication Industry Association.  The reason is that it has little to no effect on reducing piracy. 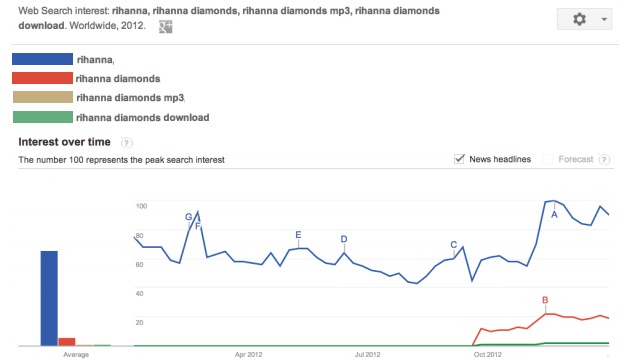 The music industry should stop obsessing about getting Google to downgrade copyright infringing sites in its search results, according to a new report published by the Computer & Communication Industry Association.  The reason is that it has little to no effect on reducing piracy.

Google has promised to comply with the creative industries’ request to push such search results down last summer, but an RIAA report this year showed little had changed since then – and the British record label association, the BPI, is sending more takedown notices than ever.

However, according to the CCIA’s research, titled The Search Fixation, users rarely input queries such as “download”, “mp3” or “torrent”, instead opting for more general queries that are simply the artist names and/or track names.

The report also claims that only 15 percent of traffic to rogue sites comes from search.  Alexa data showed only 8 percent of The Pirate Bay’s traffic came from search.

It’s worth pointing out that the CCIA is far from neutral and objective on these matters – it’s an advocacy organisation whose sole purpose is to push policy favourable to its members in the technology industry. Google is a prominent member, while Grooveshark is listed as an “emerging company affiliate“, so perhaps it’s unsurprising that the report targets the RIAA, specifically.

So what should music companies do?  Increase the visibility of lawful content in search results, says the CCIA.  Somewhat contradictorily, CCIA suggests rights owners should get legal online platforms to increase basic search engine optimisation (SEO) for search terms such as “mp3” and “download” by including them in their indexed pages.  That way, legal options appear higher in results.

The report also claims that the Why Music Matters website, a portal offering indexes of legal music platforms (or, as the CCIA calls them: “authorised content platforms”), is providing “some value”. Most music companies would, however, argue that it’s had little to no effect on the amount of infringement since it launched.

The suggestion is that the reason some people use The Pirate Bay and other sites is because they aren’t aware of legal options.

Or, in other words, Amazon, iTunes, Spotify and other “obscure” music providers need to improve their profile to increase consumer awareness of their existence – and the music industry should stop bugging Google with its takedown notices, as there’s little point to them.