Welcome to the twisted economics of music streaming. Because if Rhapsody — a paid-only service — can’t turn a profit, then who in the streaming space can?

The longest-running music subscription service now has one million paying subscribers (at last count), and has largely refused to support millions of non-paying, ad-supported users (unlike some rivals).  Basically, if you’re not paying for it, Rhapsody isn’t that interested in you. 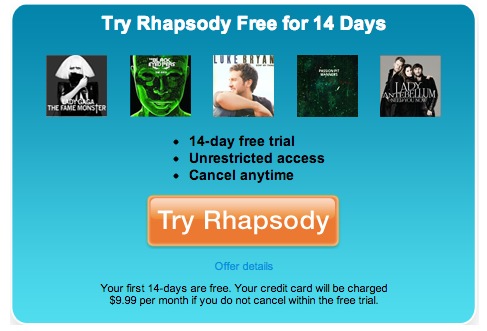 Yet despite all that premium prudence, Rhapsody’s financial balance sheet, revealed this week, shows $9.2 million in net losses for the first half of 2013 alone.  That’s far worse than the same point last year, with GeekWire pointing to shifts away from advertising (on rhapsody.com) and MP3 downloads.

But this gets way worse.  The financial details were disclosed in a filing by RealNetworks, which still holds a 45 percent share in the company.  And in that filing (here), RealNetworks noted that Rhapsody has actually been generating losses since its inception more than ten years ago.  “On March 31, 2010, we completed the restructuring of our digital audio music service joint venture, Rhapsody America LLC,” the filing continues.

“Rhapsody has generated accounting losses since its inception and we have recognized losses on our investment in Rhapsody since the restructuring.”