Social commentary via the internet thrives within its own stratosphere of rampant free speech and thought; it’s almost impossible to regard every single person’s blasé opinion as startling let alone significant in our non-virtual lives.

Yet, Chvrches, one of many bands made popular through the internet, is taking digital jibs and jabs straight to the physical heart. 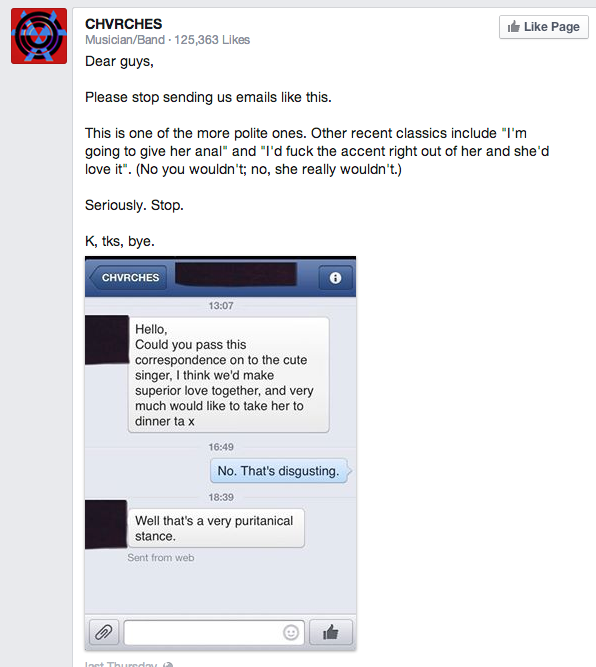 Lead singer Lauren Mayberry wrote a blog post on the Guardian, expressing her sentiments on the objectification and misogyny she faces on a daily basis: “Last week, I posted a screen grab of one of the many inappropriate messages sent to the band’s social networks every day.  After making the post, I sat back and watched with an increasingly open mouth as more and more people commented on the statement… Comments range from the disgusted and supportive to the offensively vile. My current favorites from the latter category include:

“‘It’s just one of those things you’ll need to learn to deal with. If you’re easily offended, then maybe the music industry isn’t for you.'”

Welcome to the pitfalls of unfiltered, internet-bred fame?  “Since we began the Facebook page, I have seen every message — good and bad — that has come into our inbox… it is important to me that our fans know we value their interest… Perhaps people assume we have a team of fancy PAs who deal with our social networks for us.

“Maybe the men — and I’m sorry, but they are all men — sending the notifications…”

Whether or not a person deserves to be treated one way or another is, frankly, a less interesting topic of debate. The entertainment and music industries respond to consumers’ reactions to available products, and people love Chvrches as noted by their skyrocketing popularity. Yes, the internet is a chaotic center stage for many personalities, but the really good upside is that her band has figured out a way to market and brand themselves successfully through that mess. Instead of more “Leave Britney Alone” blurbs, perhaps Mayberry could have really proved her resiliency with some confidence.

Taylor Swift, Miley Cyrus, and Madonna receive nasty comments in much greater volumes. What makes them different from Mayberry?  Maybe a little bit of blissful ignorance or thick skin.