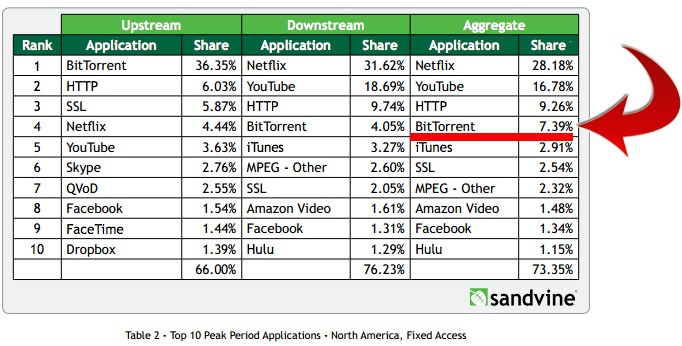 At the recent Future of Music  Summit, president of the Songwriters Association of Canada Eddie Schwartz argued that there isn’t any difference between Spotify and piracy.  According to the letter of the law, however, there is, and ‘legitimate’ services are now killing ‘illegitimate’ services, at least in the US.

Case in point: according to a just published report from Sandvine Research, the biggest piracy boogeyman, BitTorrent, is now taking a nosedive.  In just six months time, BitTorrent’s share of internet traffic volumes have plunged 20 percent to 7.4 percent overall.

“This demonstrates a sharp decline in share. Long are the days when file-sharing accounted for over 31% total daily traffic, as we had revealed in our 2008 report.”

Most are attributing this drop to the proliferation of legal services, whether Spotify, Netflix, YouTube, or any number of similar competitors across television, music, literature, and gaming.  That strongly suggests that anti-piracy efforts, whether suing grandmothers or Six Strikes letters, are having a marginal impact (if any).  “If this trend continues I think it can most likely be explained by the increase in legal alternatives people have in the United States,” Torrentfreak founder Ernesto van der Dar told the BBC.

“In Europe and other parts of the world, it’s much harder to watch recent films and TV shows on demand so unauthorized BitTorrent users continue to grow there.”