iTunes Radio vs. Pandora: A Detailed Look at the Fine Print for Artists 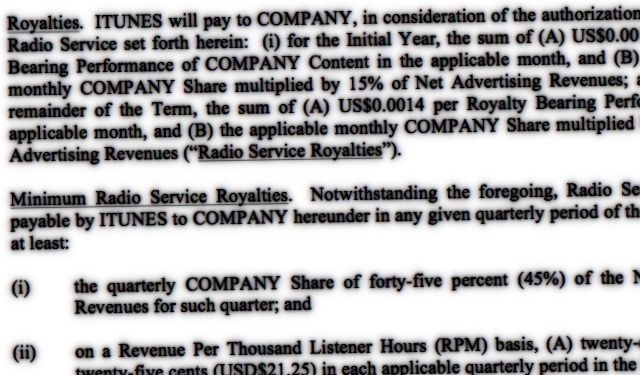 iTunes Radio has been alive for less than two months, yet its active listener base is already one-third that of Pandora.  Which means, iTunes Radio will soon be just as big – and perhaps far bigger – than Pandora in a relatively short amount of time.

But is that a good thing?  Here’s a category-by-category breakdown of exactly how each service treats its precious content partners, from the largest major to the smallest indie and artist.  It all depends on where you stand.

Pandora: In a word, impossible.

(2) Presence of a released CD required for inclusion:

(details: Pandora has held this policy for many years; Apple doesn’t sell CDs and frankly doesn’t care about them, though they do require downloads to be sold on the iTunes Store (see Apple iTunes Americas contract for indies).

(details: according to clearly spelled-out details in Apple’s contracts to indie labels, iTunes Radio inclusion can only happen if the content is already available on the iTunes Store.  No exceptions, except perhaps for the largest major labels (see Apple iTunes Americas contract for indies).

(4) Ability to up-sell to paid downloads:

(based on DMN usability testing; October 2013)

Major labels (and many publishers) negotiated their own deals, reportedly with handsome advances.  Outside of that 1%, here’s the deal:

(details: in the case of Pandora, this is based on federally-mandated statutory rates (more background here); Apple determines rates for larger recording owners in private, individual contracts, while indies are handed lesser terms (see Apple iTunes Americas contract for indies, which forces pre-determined payouts and terms to all but the largest rights owners.))

(6) Likelihood of Actually Getting Paid:

(details: this is a complicated soup and depends on the exact deals and structures involved.  Pandora processes recorded music payments through SoundExchange, which forces a percentage of payouts to artists and performers.  Sounds like a welcomed change, though SoundExchange’s payout process and metadata situation is a mess and the company is notorious for holding a shockingly-large bank account of unpaid balances.  Label deals, which also fall outside of Apple’s direct purview, can also be equally unreliable.

In the case of Apple, artists have already uploaded to the iTunes Store with existing payout schemes, but label payouts are another animal entirely.  Of course, if you’re the actual label, you get the money first!)

(for more details on this, see the decision of Pandora’s recent federal court victory against more expensive publishing deals).

10% of revenues paid pro-rate to individually-negotiated, major publishers (source); this also may include independent publishers as well.

(more details: Pandora clearly loses in this category: the company has actively battled against independently-negotiated publisher deals, on numerous fronts.  That includes federal courts and Congress.  Furthermore, Pandora is now pushing for a drastic discount on all publishing rates by purchasing a tiny South Dakota radio station (which would qualify them for far lower, terrestrial rates).)

iTunes Radio: Possible, but not without also removing content from the iTunes Store.

A large percentage of Apple’s deals are private; then again, at least you know what you’re getting paid and you don’t have to consult with a federal judge or Senator.  With Pandora, per-play payments wind through an opaque and difficult SoundExchange payout system, while the company is constantly trying to lower rates through multiple mechanisms (court decisions, endless Congressional bills and hearings, not to mention creative loopholes).  Even Pandora founder Tim Westergren drafted letters promising increases to artists… that is, after rates were lowered (which would of course make it easier for Pandora to make more money, and pay artists more… any questions?)

Up to 6 skips per hour; 12 in total per day across all stations (source: Pandora)

(note: the per-day number increases for premium, Pandora One subscribers)

iTunes Radio: Up to 6 skips per hour.

(details: “SoundExchange distributes money quarterly (March, June, September, and December), per SoundExchange’s site; “Payments and the related Sales Reports shall be made monthly, per Apple iTunes Americas contract which pertains to most indies.  Oh, and when it comes to publishing/PRO payouts, you’re on your own!)