Study Says File-Sharing Should Be Legal, Even Though It Leads To “Fewer New Artists”…

A new study, Empirical Copyright: A Case Study of File Sharing and Music Output, has been published by Glynn S. Lunney, Jr., Professor of Law at Tulane University. This study examines the relationship between hit music and the age of file sharing, which started with Napster in 1999. The top 50 of the Billboard Hot 100 was used to measure success. 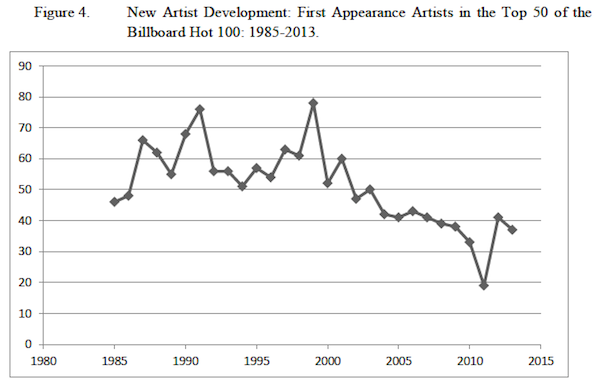 The study found that there was a sharp decrease in first appearances from artists in the top half of the Billboard Hot 100, A.K.A. less artists became successful. From 1985 to 1999 there was a 51.8 percent average of new artists. From 2000 to 2013 41.6 percent of artists were new. Figure 4 clearly shows an overall downward trend. 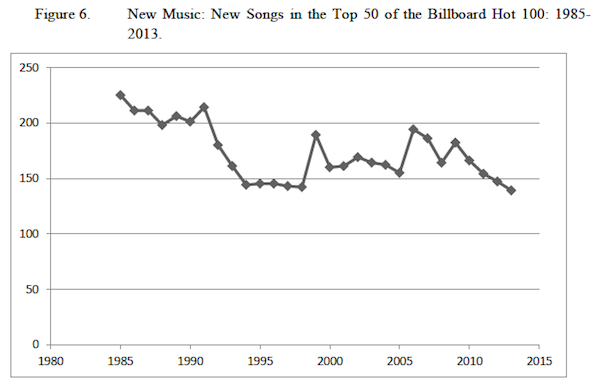 The number of new songs in the Billboard top 50 also shows a slight downward trend. However, there was an all-time low starting in 1994 and then a sharp rise in 1999, the year that file-sharing took off. There was an average of 181 new top songs a year in the pre-file sharing age and 164.5 after that. 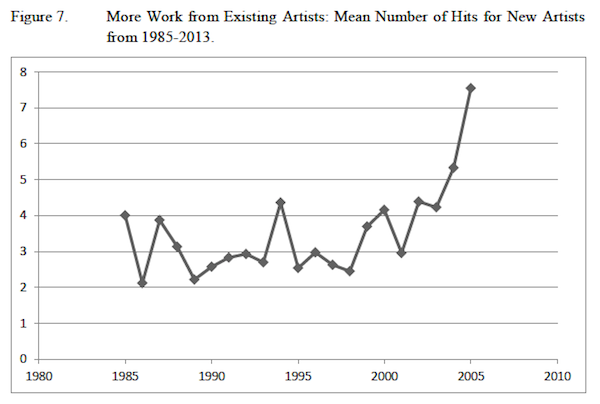 Figure 7 shows a sharp rise in the average number of hits from new artists. This means that artists who make it onto the Billboard charts are now more likely to stay there, causing a decrease in artist diversity. From 1985 to 1999 artists on the charts had 3 hit songs on average, after 1999 this number rose to 4.8 hit songs.

Overall there were more hit songs created in the post file-sharing age, but these songs were created by fewer artists. Piracy doesn’t kill creative output, it makes it harder for new artists to climb to the top, and successful artists are becoming even more successful. This could be the music industry version of the ‘rich getting richer and the poor getting poorer’. However, resources for indie artists in the digital age are not touched upon in the study.

Then the conclusion says: “file-sharing, at least with respect to music, should be legal under copyright law“, because it “promotes the widespread dissemination of existing works” and is “associated with an increase in the creation of new hit songs“.

This seems like a ludicrous conclusion, why would the industry need more of the same popular music saturating the charts?