A Pirate Asks a Google Executive, ‘Why Is It So Easy to Steal Music from You?’ 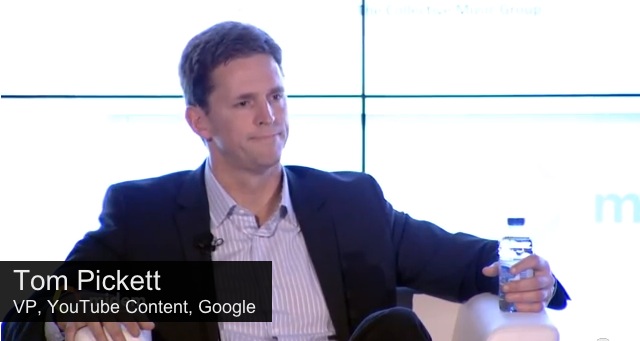 The dialogue occurred at MIDEM, the long-running music industry event in France that is now rumored to be ending (for good).  Many attendees are blaming companies like Google for that result.

Moderator Andrea Leonelli (Digital Music Trends): I think we have time for one or two questions. If there’s anything… sure.  Yes —

Audience Member #1: Question for Tom.  If you go on Google (and Google owns YouTube), you’ll find that YouTube is setting their terms and conditions in a very strict manner.  So, for example, if you buy views, they have algorithms that will throw you off, and that kind of thing.

But if you go on Google, and simply put “youtube.mp3,” the top result is a website you can put in any url and take a track straight away.

“I just wonder what plans in the future Google has in place to just get rid of that, because you seem to be able to change the rankings of websites daily, but you can’t stop showing sites that allow free downloads.”

Tom Pickett, VP, YouTube Content, Google: Yes, so, certainly, on the Google search side, we’re constantly trying to rank appropriately.  What Google Search is, is… a reflection of what’s out there on the web.  And when, when sites go down, new ones — I think what you find in this phenomenon is some sites go down, new ones come up, and so it’s a game of whack-a-mole, and —

Audience Member #1: — I’d just like to point out that I’ve been downloading from this website for three or fours or five years now.  So, this one’s  been around for a long time.

Jordan Berliant (Partner & Head of Music Management, The Collective Music Group) [laughing]: You know you’ve made it when you start getting heckled.

Moderator [smiling]: I don’t think there’s a comment on that one.

Audience Member #2:  I’m going to help this guy out here.  There’s talk that this is the last MIDEM.  Okay, that’s how serious this is.  And you’re going to laugh off that fact that your own company makes it possible for people to steal our music.  There’s a YouTube downloader that you do nothing about, with your own logo on it.

Please, speak!  You are at a music festival, potentially the last music festival of its type.  Right, you know what’s happening, so please talk to us and tell us you’re really going to do about it.

Pickett [subdued]: Sure, I’ll talk more about the YouTube side, but we, we — back to your viewpoint, there are plenty of sites out there that offer views, some of them are legit, some of them are not legit.  And frankly it’s actually hard to tell, as a, as a user, as a creator.  And we are investing a lot — you know the big thing on YouTube is the viewcount is the currency, and we take that very seriously.  And so we’re getting better and better over time about detecting bad views, bad actors out there, and we’re doing everything we can to get rid of them or discount their views on YouTube.

Moderator: I’ll just give Geoff the last comment, then we —

Geoff Taylor, Chief Executive, BPI: — I’ve got a lot of sympathy for what is being said on the floor, because we’ve been asking YouTube to deal with these stream ripping applications for many, many years.  And the point is that YouTube is supposed to be an ad-funded streaming service, not a free download service.

— and [raising voice] I don’t think it’s good for YouTube’s business model that those sites should steal and free-ride on what YouTube is offering, and we can’t understand why it’s taken so long for Google and YouTube to do something about this.  And it’s very similar to the problems we’re having with Google Search, whereas people know that the BPI sent 50 million notices to Google in the last year alone, to remove YOUR music [motioning to audience], which is being indexed illegally on Google’s search engine.

“And despite the fact that we’ve sent 50 million notices, and 2 million of those are to a particular site, it still comes top of search, in search results.”

So the point is that when you know that something is illegal, you surely have the responsibility to take that knowledge into account, and to do something with your search rankings which gives the legal sites a chance to put themselves in front of consumers, instead of the pirate sites.  And I think if we’re going to have a really productive partnership, then Google has a responsibility to do something about that.

[no response from Google]