Did You Know Kelis is a Trained Chef? Learn Her Recipes and Hear Her Playlists… 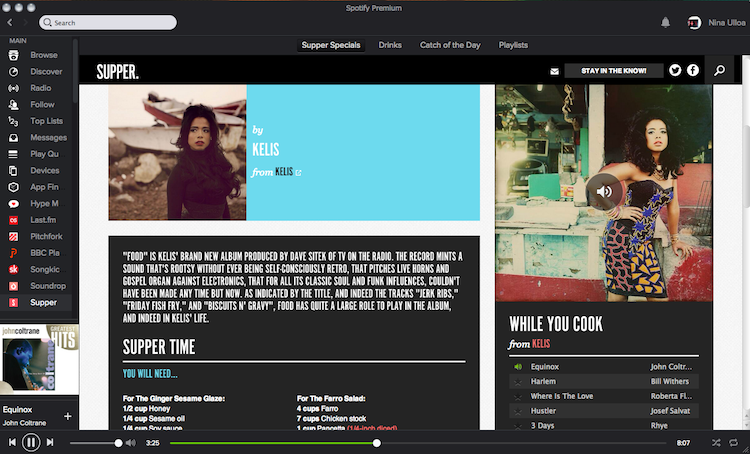 I previously featured Supper, a Spotify app that pairs food and music.  Supper pairs recipes with playlists, and their selections are curated by experts in each field.

Now Supper has found a guest curator who is an expert in both music AND food… Kelis.

Did you know that Kelis is a certified Le Cordon Bleu trained chef?  The fact that she drove around SXSW handing out homemade “Jerk Ribs” suddenly makes even more sense to me.

Kelis is letting us in on both her recipes and her music taste. On Supper, Kelis shares her recipes for apple farro, jerk ribs, new york vanilla bean cheesecake, and more. She’s paired this with playlists for both cooking and eating. In addition, Kelis has chosen some of her favorite restaurants to share recipes and playlists as well.

I really appreciate the thought and passion that’s gone into this partnership between Supper and Kelis. It’s genuinely made me excited for the release of Food. I saw Kelis at SXSW, and was extremely impressed, but getting a view into her combined passion for food and music has made the album release a little more personal.

When Nina Ulloa isn’t writing for DMN she’s usually reviewing music or at a show. Follow her on Twitter: @nine_u